Who better to solve your problems besides uncertified non-gurus? 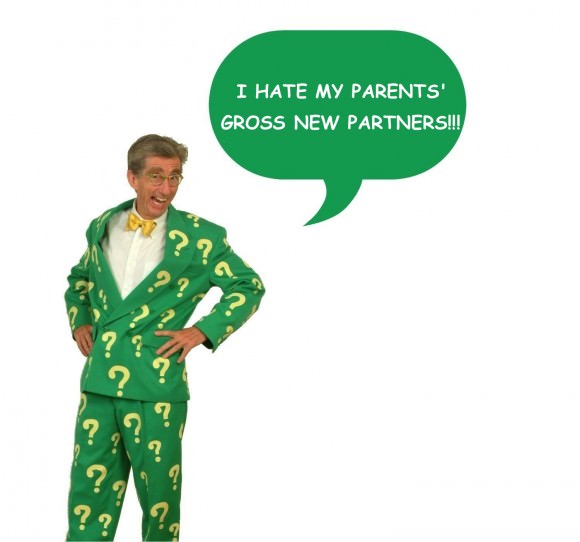 My parents are divorced, and each one has been seeing a new person for the past year. The problem is that my sister and I don’t like their new significant others. We know they will probably not break up with them anytime soon, but we don’t think it’s fair that we are forced to hang out with people we don’t like! Our parents already know how we feel; how can we get them to stop making us spend time with their new partners? —Kendall, 18, Caldwell, NJ

Hello, my fellow townsperson! I am from where you’re from, both in terms of locale (JCHS ’08! Woo! Go [horrendous racist team name that our hometown inexplicably refuses to change]!) and of the malignant teenage hatred of my divorced parents’ then-partners. It would be one thing if your parents were bandying about tons of loathsome love interests over the course of a year, which would be pretty insensitive. But, as you write, they’ve been seeing these people for what is, now, a significant amount of time to stay with one person, and that’s not likely to change in the near future. So let me ask you this: Would you prefer your parents completely conceal and compartmentalize their lives in order to keep seeing these people, or would that feel a little dishonest and condescending? And: Would it bother you if they had kinda-logical reasons to hide these relatively big parts of their lives from you?

Worse than meeting Sheri, an ex-paramour of my dad’s who was given to unbidden critiques of my wardrobe and had a frenzied passion for Tweety Bird memorabilia, was a few years later, when I found out he had gotten engaged to a different woman, to whom I had been unwelcoming and sometimes downright mean, without telling me right away. When I found out (I glimpsed her ring on a group outing to Hershey Park—shoutout to the breed of divorce teenagers who spend way more time at zoos, fairs, and theme parks on custody outings than most kids 10 years younger; those mouse ears look quite fashionable with defaced JCHS football T-shirts, trust), I stumbled through the following logical relay race:

Why didn’t he tell me? He can trust me! I’ve been so great about their relationship, like when I…barely-audibly whispered that she was a freak every time he left the room for a second! Wait, that was actually pretty rude. But how about when I…insulted their home, which she clearly put a lot of time into decorating with all those festive vases? Shit, hold on, no…the time I straight-up said that if they ever got engaged, I would throw her ring into the ocean, despite the fact that we lived nowhere near a major body of water, I would manage to FIND A WAY. O…oh. I’m kind of a dick.

In case it isn’t clear: This is not a cool thing to realize about the way you treat people you care about, even if the people they love gargle cop sweat for fun or are just boring or whatever other AWFUL OFFENSE we’ve judged them guilty of. You love your parents and they love you, so unless these new beaux are outright mean, inappropriate, abusive, or frightening to them or your sister, you’ve got to gulp down the impulses to hiss about these partners’ freak-vases and, instead, try to have empathy for your parents.

If you had a partner who was anodyne in all ways, but your parents disliked that person for whatever reason, you’d probably be pretty hurt if that beloved was BANNED FROM THEIR PRESENCES, ALWAYS. You’d likely find it more than a little myopic and unfair. BUT: I get that these are not totally analogous situations. You may have been really hurt by your parents’ divorce, regardless of the knowledge that that wasn’t their intention. You are allowed to still be hurt by it. Just try to parse out that hurt and recognize it for what it is rather than manifesting it in trying to hurt your parents back. They didn’t get divorced because they think theme parks are fun as hell and so, for that matter, is hurting their children. It wasn’t easy for them, either, and probably still isn’t.

Just in case: If these new people ARE, in fact, malicious, untoward, or cruel to anyone in your family, point that out to your parents without hesitation. I have been in this scenario too (more than once, in rather extreme ways), and can tell you that being calm and specific, e.g., “I’m worried about the way that Eric comments on my sister’s body. He has also said [x and x thing] to me, and it’s totally inappropriate,” gets your point across more effectively than shutting down and giving only “ERIC IS A DERANGED LOSER IGUANA-FUCK” as your rationale, although I can more than understand why you’d be inclined to. If they don’t freak out and excise that person from your lives with a quickness, tell another adult you trust (or even one you don’t trust if they’re in a position to help you, like a guidance counselor). If your parent is being abused or otherwise treated in a way that concerns you, same deal.

I think you would have said that one of those things was what was happening if that’s what you meant, though. From what I can infer, you’re dealing with more of a “Tweety Bird enthusiast” situation. If this is true, try to put in the maximum amount of strained-smilin’ face time that you can without being driven completely up the wall, then pretend to be sick if you have to. If you can’t, try to find ONE BEARABLE THING about “mom’s friend” and myopically zero in on it as hard as you can, no matter how rancid their police-B.O. breath is. Be empathetic. Do not, under any circumstances, dramatically throw someone else’s engagement ring into the sea…even if it would make for a great story in a rad, Brontë-ish way, which it WOULD. X ARS