Online friendships can be just as meaningful as face-to-face ones. 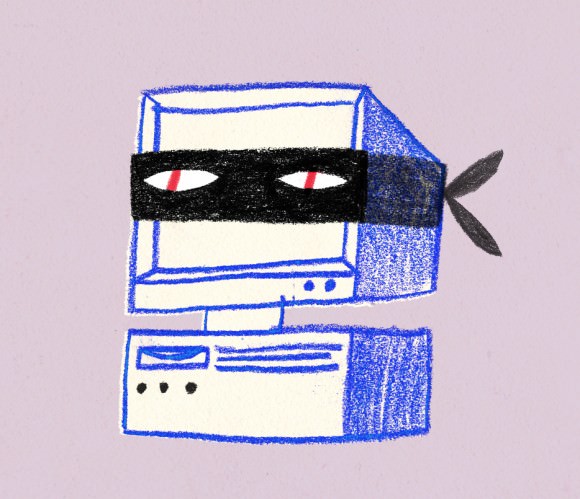 In 2004, I mostly used the World Wide Web to read message-board gossip about the Strokes and perv out on pictures of Maltese puppies. When I heard about a website called Myspace, I was in my early 20s and had just gone through a weird breakup. Before long, I was using it to meet and go on hilarious failed dates with guys I’d nickname “Mudvayne License Plate” or “Steve Buscemi With Rock Hard Abs.” (Back then, I didn’t have the level of dating standards that I’d develop later.)

One day, I opened my inbox and saw a message from someone named Klaus. Whoever this “Klaus” was asked me what I thought about You Are the Quarry, Morrissey’s latest album. Excited to talk to another Moz fan, I responded, although I found it kind of strange that there were no real photos on Klaus’s profile—only pictures of the late Klaus Nomi, an eccentric German opera singer whom Morrissey admired.

I was never weirded out enough to end our conversation, though. The transition in our conversation from talking about Morrissey to creating inside jokes with each other was instant: One minute, I’d joke about a specific kind of VHS tape, and the next, he’d somehow link it to mentioning acid-washed jeans. I was thrilled to be talking to someone who was so funny, and so odd.

After a few exchanges, I looked at his “Who I Want To Meet” section. In it was a photo of me that he had turned into an animated GIF. WHAT THE FUQ. Was taking someone’s photo and modifying it into whatever you wanted normal?! I told him to take it down, and he apologized and removed it. But I was intrigued…and perhaps even slightly turned on. My gut feelz told me that I wasn’t talking to a dangerous person, and a little later, that instinct was validated when I was contacted by a girl who lived in my town and claimed to have met Klaus in real life—they had a mutual friend who knew him really well. (Although “gut feelz” isn’t an actual barometer for making sure your online amigo is the real deal and not some scary monster, having mutual IRL friends is—here’s a good list of other ways to make sure your cyberpal is who they say they are and keep yourself safe. Another one is being a legal adult, like I was.) When I asked him for a pic of himself to put under my own “Who I Want to Meet,” he responded with this: 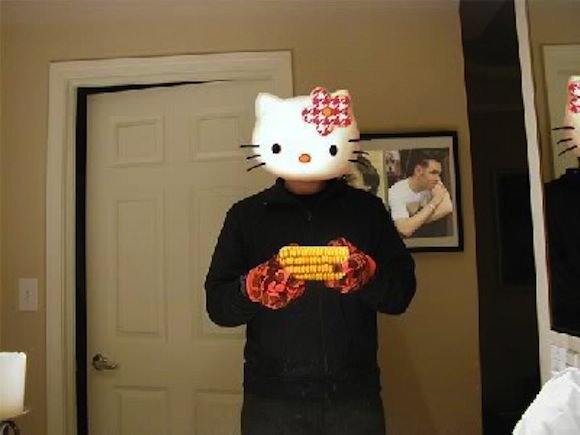 We talked about random shit all day long. He was hilarious, mysterious, and strange as hell, and I found him more and more intriguing. Once, we spent hours trading Google images of Hello Kitty accompanied by Morrissey or Smiths lyrics. Another time, he surveyed the entire internet for every photo of corn he could find after I shared my affinity for the vegetable. No Google image stone was left unturned. Nowadays, there’s a funny Photoshopped picture everywhere you look, but back then, it was like he was the only one making them. And he made them a lot. One of many, many examples he made using me as his muse: 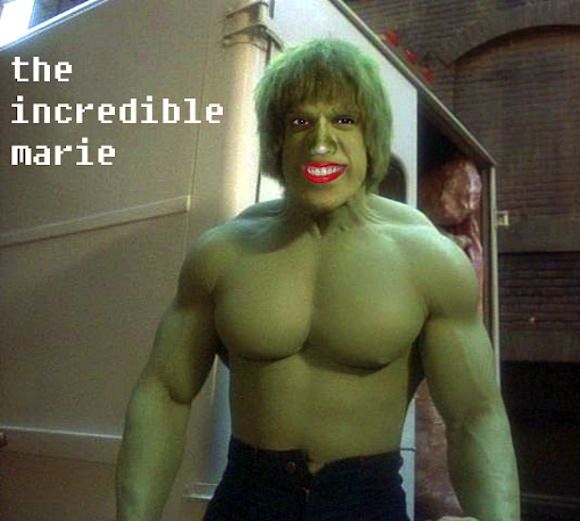 Our online chemistry was unstoppable. I told all my friends about him, and though some of them knew him, they wondered what the hell I had gotten myself into. Most, like me, were kind of charmed by the whole thing. I developed intense crush feelings for him, which made no sense, since I’d never seen his face. To substitute for the lack of his real physical image, I fantasized that he looked like Brandon Flowers, the lead singer of the Killers. When MTV’s Catfish came out a few years back, I wondered, Had the show existed back then, would I have asked them to help me figure out who Klaus was? Probably not, I think: Not knowing was part of the fun, and so was “playing along” with this mysterious internet character.

After a few weeks, Klaus began sending me mix CDs that included perfectly chosen, obscure covers of the Smiths and songs by Broken Social Scene and Slowdive. Some of the music he introduced me to made me feel like I had been punched in the stomach by my own emotionz: Her Space Holiday’s “Japanese Gum” caused me to burst into tears upon first listen; “Elevator Love Letter” by Stars reminded me of a movie that hadn’t been made yet. He got it. He got me, and I was frustrated and confused by it. I felt like I was falling in love with a person I had never even met or known what they really looked like. Who was on the other side of “Klaus?” 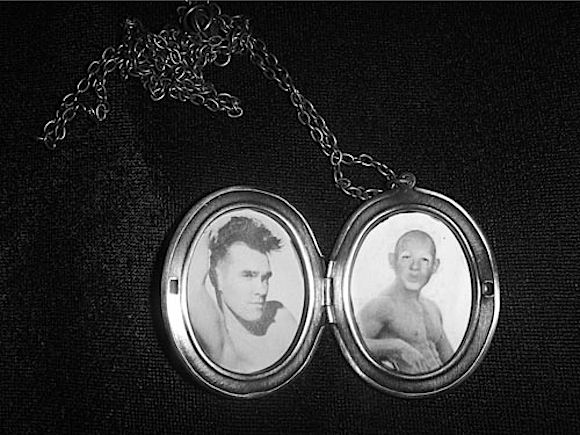 I started wearing a locket with Morrissey’s picture on one side, and, hilariously, one of Klaus’s Photoshopped “self-portraits” on the other. I knew that he lived in the same area I did and dreamed about running into him randomly when I was out with my friends on the weekend. Five months after we first met, Morrissey was playing a concert that we were both going to attend. I was simultaneously nervous and excited about finally meeting him. After the show, we met outside—finally, there he was in the flesh, right before my very eyes. AND HE WAS HOT AS HELL. He had the bluest of eyes, just like a Siberian Husky. CHILE. I was in love.

We were both quiet at first. It was awkward to meet my #1 weirdo internet crush! Klaus/Josh was very private, but I found out he was married. WHAT IN TARNATION?! All my fantasies of a hot Myspace love story crumbled into dust. The revelation didn’t hinder our connection, though. Over the years, we ended up becoming even closer, and our online friendship turned into a real-life one. We hung out face to face and talked about our personal lives. He saw old and new friends come and go and heard every sordid detail of my ridiculous love life. We shared our ideas, dreams, fears, new Interpol songs, and creative projects, like Polaroid Apocalypse, a photography-based project we created when we heard Polaroid was going out of business.

Sometimes, I like to connect all the dots of my life that lead back to Klaus. He was the one who convinced me to move away from LiveJournal and write on my own website. He said it would be better in the long run, and I trusted that he would be right. In fact, he was the one who built it. That blog eventually led to connecting with other bloggers and writing for other websites. I can trace dozens and dozens of people, some of whom are now a huge part of my life, back to knowing him. A Myspace friend I met initially through Klaus became a good friend of mine and introduced me to a now ex-boyfriend, and that ex introduced me to my now best friend. It’s remarkable to think about the impact his friendship has had.

In the introduction to This Star Won’t Go Out: The Life and Words of Esther Grace Earl, John Green writes:

I dislike the phrase “internet friends,” because it implies that people you know online aren’t really your friends, that somehow the friendship is less real or meaningful to you because it happens through Skype or text messages. The measure of a friendship is not its physicality but its significance. Good friendships, online or off, urge us toward empathy; they give us comfort and also pull us out of the prisons of our selves.

Tons of people enter and exit our lives. Some visit briefly, while others stay for a while longer. The very existence of some of these people will make you feel like you’ve been kicked in the guts by a perfect song. I don’t know if soulmates are real, but if they are, Klaus is one of mine.

There’s something about Klaus’s friendship that has always felt different from the ones I’ve had with people that I first met in person. Maybe being myself felt safer behind the veil of the internet. Maybe the same was true for him. It makes me think of that Oscar Wilde quote, “Man is least himself when he talks in his own person. Give him a mask, and he will tell you the truth.” Online friendships can be just as meaningful as “real life” ones. They mostly end up becoming the same thing, but in the beginning, there’s a freedom to be as completely weird as we really are, because we don’t exactly know who the person is on the other side. I never lost that with Klaus.

there is a light and it never goes out

We’re both older now, our lives are very different than they were a decade ago, and we may not talk all day long like we used to, but I know Klaus is always there for me. One morning last year, I found a mix CD stuck under the windshield wiper of my car that was labeled “Goth Summer 2013.” It was the first one I had received from him in years. I was heartbroken and he had promised to send a cheer-up gift. The songs he picked were absolutely, stomach-wrenchingly perfect, just as they always were. ♦