How to Be Friends With Your Ex 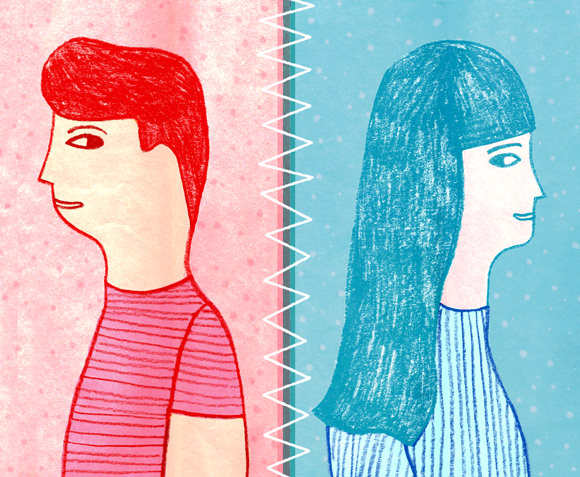 ROOKIE: The editors of Rookiemag.com are wondering whether you’d be interested in writing a piece for A World of Our Own about being best friends with your/an ex?

Absconds to mountaintop castle, and after 20 years returns to the village with long beard and thick scroll, which reads…

Let us begin with the end! Brooklyn, New York, in a little joint called Best Pizza. A young heterosexual couple is eating slices and laughing. One is me. I’m cute and have curly hair. The other is my boyfriend of nearly five years, fiancé of one year, and ex of about 20 minutes, Johnny Utah (not his real name; actually the name of Keanu Reeves’s character in the 1991 surf thriller Point Break). What are we laughing about? Who gets to throw their engagement ring at the other person first.

That our breakup was going to be as unusual as our relationship was already evident as we chewed our crusts. We were proud of what we had accomplished as partners; we were a team through an abortion, a major depression, moving in together, and moving far away from each other. We had shot each other with a plastic BB gun (after asking politely first) and had long talks about death. We were so smug about our recent breakup, actually, that we enjoyed everyone’s sympathy but also congratulations on our fifth anniversary, which we celebrated anyway. Three years later, I introduce him as my ex-fiancé/current best friend and all-around Significant Other.

Secret the First: Everyone’s Gotta Be All In

Why would you want to be friends with your ex, anyway? For me, Johnny was the coolest funniest and weirdest person I had ever met, and also the best friend I had ever had. When I was hurting, I saw that it hurt Johnny, too. Nobody had ever cared like that for me before, including myself. He was patient and kind and always honest with me. I valued his opinion above everyone else’s on everything but music (he’s really into noise music, whereas I prefer anything with feelings).

If you’re reading this article, I’m assuming that you have (1) self and (1) ex with x reasons as to why you want to make (1) ex = (1) friend. But let’s take a look there, because Being Friends has not worked out particularly well for me when:

These reasons for friendship are not because I wanted to be friends with another person—they are because I didn’t want to accept a feeling or, EVEN WORSE, feel that feel at all. Avoidance and denial have caused me a lot of drama, suffering, and grief. All the times I forwarded emails from an ex to other friends so they could just read them because I thought an ex wanted to hang out with me but why did he/she keep postponing plans OR I made big pronouncements to my ex to woo them into spending time with me—I was trying not to feel something. Usually that something was abandonment, loss, or rejection—hard feelings for sure, but the amount of effort I was putting into not having them, you’d think they were fatal diseases instead of transitory moods. (I have yet to die of a feeling, and trust me, I have tried. Very hard.) In each case I can think of, it was important to be my own best friend/sweetheart/make-out partner for a while after the breakup. With Johnny, it meant going to things on my own where it would have been easy to go with him, too, or something as small as being proud of myself for things I’d accomplished without sharing them with him. Any time I tried to tuck friendship into the hole my romantic relationship had left behind because it was “good enough,” I wasn’t being accountable to the other person or to myself.

Did I know that these were my motivations at the time? RARELY. And that’s OK. But it’s worth a hard think. A trick: If you can’t kick the feeling that just being friends is still somehow Less or Second Prize, then it’s probably not a great time to reach out to the other person about friendship. I mean, you don’t look at every one of the friends you’ve never been anything but platonic with and think, “God…if we only could be making out right now.” Even though that making out is technically a possibility, right? It’s equally disingenuous to date someone you don’t really like and to not-date someone you really like: neither honors the wishes of both people, and both are means to an end.

Whatever your motivations are, just make them clear. Informed consent ain’t just for the bedroom, y’all. Asking yourself, “Is this what I want or is this enough of what I want that I can deal with it, right now?” is a scary question. If you ask for what you want, you might not get it. But the only thing you can lose by asking someone, genuinely, if they have the same motivations as you is a false relationship. If you put out a hand for friendship and get back a shrug or a snub, don’t take it personally: It’s the opportunity for both of you to move on to something that meets your needs. If you had stuck around, you would have been working very hard to make yourself want the things that relationship was giving you as opposed to getting the things you wanted from that relationship, which is almost always an exhausting process.