Last year, I was the new kid. Now I have Sam. 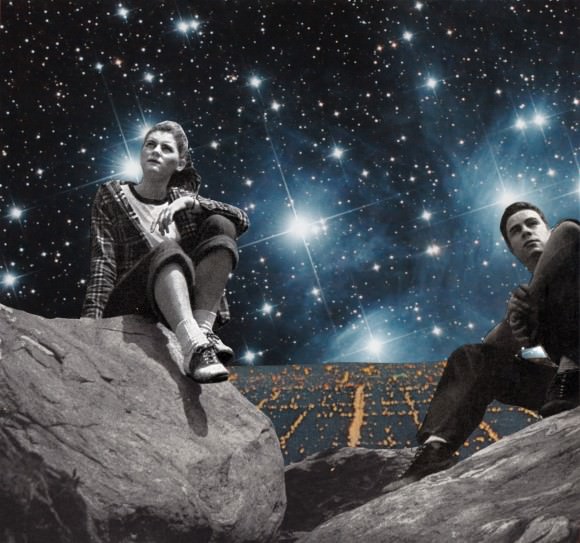 Sam’s school bus is Number 44. The driver usually gives me shit for getting on because you’re only supposed to take your own route. When he doesn’t stop me, I imagine he’s taking mercy on me, but it’s more likely that he doesn’t notice, or care. I’m just another kid in a sweatshirt, nose running from November to March, breath fogging up his windows. Today he lets me on without a blink.

I started hanging out with Sam at the beginning of the year because he was in all my classes. He let me copy his Python code in Tech Ed, and I summarized Member of the Wedding for him so he didn’t have to read it. We fell into a kind of academic symbiosis, getting our homework done before the end of the day by pooling our resources (a little of my history notes here, some of his French grammar there), speeding through worksheets while sharing a pair of ear buds to listen to Elliott Smith.

We eat lunch outside, leaning against the brick wall of the cafeteria, even now that it’s so cold I have to thaw out my fingers over the art studio’s ancient radiator after. It’s an unspoken kind of dare between us, whether we can stick it out together. I refuse to wear tights. With Sam I feel untouchable, apart from everything. I feel like I’m in a teen movie, even if I’m shivering. Last year I was the new kid. This year we’re the quiet rebels at the back of the class. We laugh at girls who wear pajamas to school and guys in puffy parkas with shorts.

Every Friday, I take the Number 44 bus with Sam and we go out for Chinese food in his part of town. There’s a Barnes & Noble, a pizza place, a park, and a gas station with good candy, unlike near my house where there aren’t even sidewalks. At China Garden, I lean into the vinyl booth and stare up at the chandelier, its dusty glass catching light and making rainbows on the wall. I half-close my eyes and sigh. No matter what dumb embarrassments school throws at us each week (failed math quizzes, snow-soaked jeans that cling to your legs all day, the insult of bathroom passes), China Garden supplies us with enough hot tea and lo mein to make them disappear. And for just 12 bucks. Tomorrow is Saturday, which is basically almost Sunday, which is filled with church and homework. Friday night is the only true day off, we decided a while back, when you can do anything you want and don’t have to worry about getting up early the next morning.

“Donna McCarthy’s art is just getting worse and worse,” says Sam, picking at the last of the chicken and broccoli.

“Did you see she added a blunt today?” I ask. Donna is painting a huge canvas with Bob Marley’s head on it, using a picture she found on Google Images. Last quarter in Art Studio, she did a life-size portrait of Audrey Hepburn in her little black dress, holding a fancy cigarette. It looked like one of those cutout characters they use to advertise movies. “She specializes in smokers.”

“The real question is what is she going to do when she runs out of heroes,” Sam says.

For Sam I laugh, but the truth is that I’m not sure if I’m much better than Donna McCarthy. I can talk about what “good” or “bad” art looks like, and I can see what I want to make in my head, but when I put charcoal to paper, or mold clay, or take photographs, the result is always a kind of a blurred version of what I imagined. Visionless, blah. It’s depressing to have something like that come out of yourself. I look down at my greasy plate.

“Want to go to Dunkin’ Donuts?” I say, swinging my backpack over my shoulders as we leave China Garden.

We’re both wearing jean jackets though it’s far too late in the year. Our hands are in our pockets, and the wind pinches our skin and cuts into our T-shirts. It’s my turn to buy Munchkins. Sam picks out the cinnamon ones for me and I save him the chocolate glazed. We eat them from the bag at a purple Formica table. It’s dark enough outside that the window is like a mirror.

Sam’s hair is standing up and makes his head look jagged in the reflection. My shoulders are hunched. Nothing exists on the other side of the glass. It’s a delicate equilibrium. We don’t mention whom we used to know, or other friends. We don’t discuss his mom—I don’t even know where she is—or my dad in California. There are times when I miss my friends from my old school, mostly because they were girls, and I could open up to them about certain things I can’t tell Sam. Like, I can’t talk to him about making out with Martin Stills, who lives across the street, or how Martin, a senior, looked offended that I knew what I was doing with my tongue even though I was just a ninth grader. The few times I’ve brought up things like that, our realm freezes over. He clams up completely.

“Let’s go to Barnes & Noble. I want a hot chocolate,” Sam says, crumpling up the Munchkin bag and throwing it in the trashcan by the door. There’s just night beyond the light of the storefronts and the cars’ headlight flashes. When Sam stands in the shadow of Dunkin’ Donuts, it’s as if he’s not there.

We walk, and Sam stops for a slice of pizza at Al’s, but I’m full. “Your loss,” he scoffs. Every so often, under a street lamp, our shadows merge into one. I wonder if we would have been friends at my old school, or if we’d mistaken our twin class-schedules as fate—that we’re playing out as a friendship that doesn’t make sense.

“Shit, it’s past 10,” I say as we approach the bookstore. The parking lot is almost empty. Sam wipes pizza crumbs on his pants.

There are voices on the far side of the lot. I can make out the faint forms of some guys smoking on a low stone wall. As we get closer, I can see that there are three of them, sitting with their legs spread wide. Sam straightens his back. I recognize the middle guy, Josh, because Sam pointed him out to me one day at lunch. He hangs out with older kids. Sam trots ahead of me to get to them.

“Hey, Sam, what’s up?” says Josh. He’s in our year but has a full scruffy beard. The two other guys seem to evaluate Sam and I as we stand there, trying not to shiver. The three of them are wearing down jackets, the kind that make your head look too small. “You go to our school right?” said Josh. “What’s your name?”

“Clara,” I say. The way they’re looking at me, as though they’re ready to laugh, makes me feel dumb.

“OK, you want a beer, Clara?” He pulls a can out of his backpack and hands it to me.
I crack it open.

“You going to actually drink it?” Josh asks me. His sidekicks snicker. I take a sip, and it tastes like licking tin. Sam grabs the can from me and gulps. Josh narrows his eyes. “So are you two together or something?”

“No, we were just hanging,” Sam says. He chugs down more beer and shuffles his feet. I wrap my arms around myself to block in a little heat.

“Well, then hang with us,” Josh says.

“Cool,” says Sam, pushing his weight from foot to foot. He glances over at me.

“Suit yourself,” says Josh. “Want another beer, Sam?” He digs a can out of his backpack and hands it to Sam.

“You want me to come?” he asks. I’m pretty sure he’s afraid I do. I shake my head and smile.

Heading back toward the Dunkin’ Donuts, I hear them laughing and cracking open more beer. I can tell Sam wants to be a part of it—just like at school when a group of girls bursts into the bathroom giggling, and I feel that maybe our twosome isn’t enough.

My whole body protests against the temperature. I ball up my fists but can barely close them, my ears ring, denim is rough against my arms. I walk as fast as I can to the 24-hour pharmacy by the bus stop, and go inside to get warm. I buy gummy bears and a soda and gum, too. I’m handing the cashier a 10 when someone taps me on the shoulder.

“I thought you said you were full?” ♦