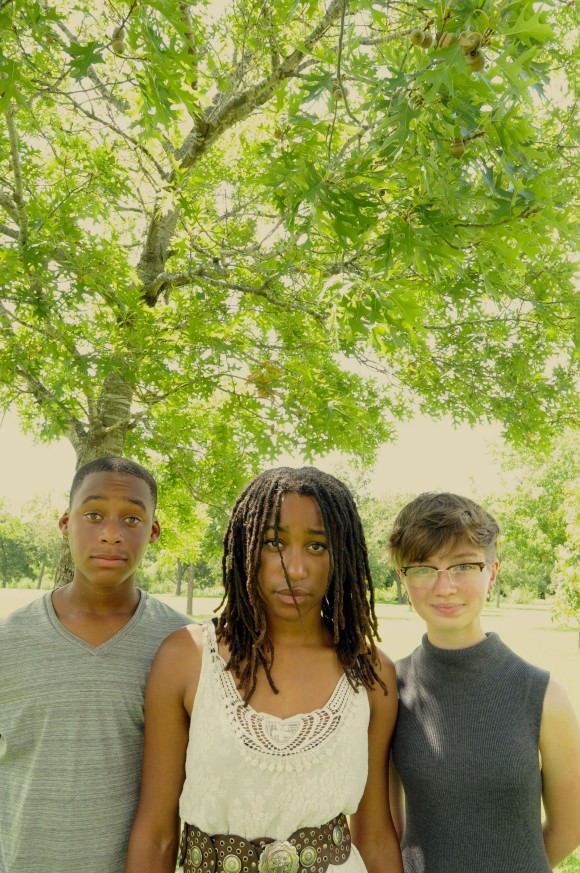 How many people can say they got their big break in their bedroom? Three years ago, Jendayi Bonds and her younger brother, Gyasi, under the name Charlie Belle, recorded a Magnetic Fields cover in their room in Austin, Texas, that got them widespread attention, eventually landing them in the pages of USA Today. They haven’t looked back. They added a bass player—Zoe Czarnecki, whom they met at a Girls Rock Camp—and together the teenage trio have continued to kick up dust with their renderings of super-melodic, toe-tapping guitar-pop. Want an example? Listen to this month’s wonderful theme song, “Get to Know.”

I called up Jendayi between school and rowing to talk about this track, and to find out whom she draws inspiration from and what’s she thinks is the best way to listen to music.

NILINA MASON CAMPBELL: When did you start playing music with your brother?

JENDAYI BONDS: Gyasi and I moved to Austin with our parents in 2008, when our dad got a new job. We had already known how to play our instruments for two years, but had never even thought about playing in a band together! When we got here, everyone was playing live music, and we kinda just thought we had the basic tools to start our own band, so why not try it?

The plot follows a person in a relationship—not necessarily a romantic relationship, but any relationship with anyone. [The narrator] wants to know more about this person, and they want this person to know more about them, but the person they like is, for some reason, pushing back against that. So the narrator of the song—and my songs aren’t usually me narrating, if you know what I’m saying—is trying to figure out ways to get closer to this person. The overall theme is “We’re new to each other, let’s meet each other, let’s know how we work so that we can work together!”

This month’s theme on Rookie is The Other. How does this song connect to that?

Has there been a time in your life when you identified as the Other?

I mean, I’m an angsty teenager, so all the time! All the time.

Do you think music helps you discover who you are?

I do. I write music for everything, to work through everything. When I finish a song, I can look back on it and be like OK, this is how I’m feeling. Sometimes I don’t know how I’m feeling going into writing a song, and then when I finish it and it says something. But also, I’m a music listener, and I definitely feel like I find myself when I listen to other people’s music.

I’ve read that Arctic Monkeys and the Strokes are big influences on your music. Do you feel like they’ve played this self-discovery role for you?

Absolutely. Arctic Monkeys are my favorite band of all time. I discovered their music about five years ago, when I was 11. When you’re 11, you think you’re choosing your own music to listen to, but you’re probably still basically listening to your parents’ music. My dad works in advertising, and they get a lot of music sent to them. He listens to a lot of it, and if he hears something he thinks I would like, he’ll share it with me. It’s really great; he has really great taste in music. He gave me Favourite Worst Nightmare and was like, “Check this out.” I listened to it and had a creative epiphany. I’d never heard anything like it before—it was amazing. I got to see them play Austin City Limits that year, and I fell in love, obviously. I’ve seen them three times now.

After I got older and my writing got better, I started listening—actually listening—to Arctic Monkeys. I was paying attention to Alex Turner’s lyrics, and I couldn’t even believe that anyone could actually write anything like this.

What about his lyrics do you connect to?

I wouldn’t say I find an exact connection with his lyrics; I’m more in awe of them. The way he uses words, and the cadences he delivers them with, are unexpected, but they work so wonderfully. Alex Turner is my writing muse! When I sit down and try to write something, I come up with a basic idea and then I think, How would Alex Turner get this point across? What would he compare this to? It keeps my mind going. It’s easy to write something as basic as having a crush on someone or something like that; it’s a lot harder to compare that crush to something nobody’s thought of. Alex Turner has mastered that, and I hope that I will too someday. Maybe I’ll even be able to write something with him!

Where is your favorite place to listen to music, and how do you like to do it?

I like to listen to music in my room. I have really good speakers, so I like to play it loud. My family doesn’t really like how loud I play it, but I like hearing music big, so if I have to, I’ll listen on my headphones, sitting down. I hate listening to music when I’m doing other things, because I get so distracted. I completely stop what I’m supposed to be doing and just stand in my room, or maybe start dancing. I usually have music time when I can just listen to it.

What’s the most fun thing about being in a band?

Being able to watch a song come to life. Having an idea become a guitar-and-vocals song, and then adding the drums and the bass, is such a magical process. The resulting song is never exactly what the initial idea was, and that change fascinates me. Of course, it’s stressful, because getting a song to the point at which you actually want to hear it and play it takes a long time and a lot of hard work, but it will never stop being the most exciting part for me. Looking forward to debuting a finished song gets me through all the hard work. ♦