Would you believe me if I said I’m sometimes happy I have an STI? 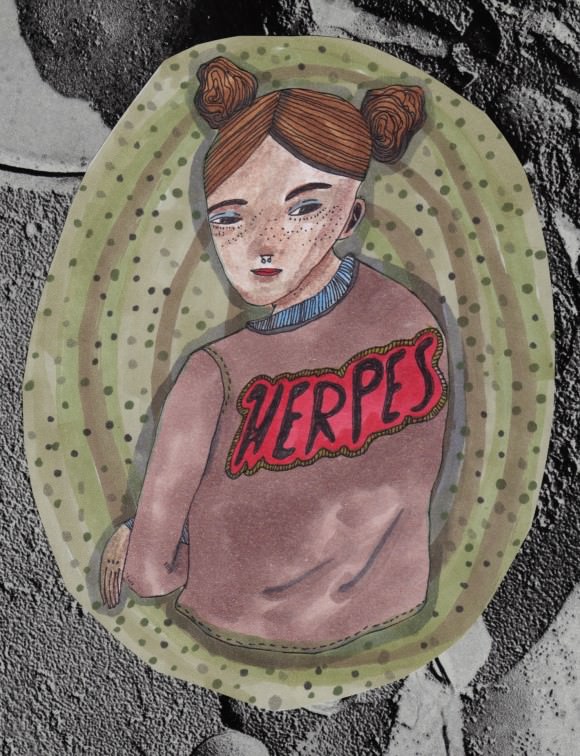 When I was little, I imagined that if I joined a secret society, my induction would be marked by the arrival of a wax-sealed envelope stuffed with a rune-covered notecard. Instead, I was welcomed into my exclusive club via a painful, itchy bump on my labia when I was 21. Perhaps due to this gap between my expectations and reality, I didn’t immediately recognize that I had been picked as a member of a (not-so-)exclusive club. I decided to make a doctor’s appointment. Lo and behold: “Looks like you have herpes,” my doc said after eyeballing my vag for all of a minute. “We’ll run tests. But, yeah.” It was an easy diagnosis—she had seen my symptoms a hundred times before: a tingling, itching, burning vaginal area followed by fluid-filled blisters that burned when I peed. (FYI, a herpes simplex virus attack can also be accompanied by fever, muscle aches, and swollen glands, though I’ve never experienced any of those signs.) After a few words of advice and a prescription for an antiviral med that would soothe the pain from the bump-blisters, she pulled off her gloves, tossed them in the trash bin and left the room.

I couldn’t abandon the situation as easily, and there’s a chance I never will. Herpes simplex virus is a chronic infection for which there’s no cure. It causes sporadic, acne-like outbreaks on your area(s) of infection—these are around your mouth, in the case of oral herpes (in doctor-speak, HSV-1), and in the case of genital herpes (HSV-2), on your genitals (duh). As of right now, when you get it, you have it for life, although attacks tend to get way less intense and frequent over time. These days I regard my herpes as no more serious as a very occasional bout of zits, but when I left the doctor’s office that day, I felt like I’d been marked with a strobe-lit capital “H.” My years of slutty behavior have all led up to this, I reflected. The casual hookups, the fun sex, the boys I’d never have another conversation with after I rolled out of their bed—these moments were over, as was my life. Never again would anyone ever want to have sex with me, share a towel with me, go on a date with me, kiss me, love me. I knew girls in my high school who had STIs, and whispers followed them everywhere. I hated the thought of those same whispers following me.

Club Herpes is an uncommon secret society—once you’re initiated, you must notify a select list of outsiders about your membership. My doctor told me to tell everyone who I had relations with in the last three months to get tested. Mired in the depths of despair, I set about contacting my recent sexual partners. I started with the boy I’d been dating the previous summer until he moved away. He was older than me and improbably, perfectly handsome in that 1980s-fraternity-movie way. He was hyper-intelligent…and rude: When he saw bicyclists, he would roll down the window of his Honda and yell, “Get a car!” much to my own bike-riding chagrin. Sure, he was kind of an ass, but I didn’t really mind at the time, because OMG, SO HOT.

Our conversation didn’t go very well. Somehow, I managed to stammer out the necessary words on a long distance phone call. “You fucking slut,” he said after I broke the news. Despite the fact that he had never gotten tested, he was sure that he had no STIs and, moreover, was convinced that I had given him not only herpes, but probably HIV, too. He demanded that I tell him how many people I’d slept with in the weeks since we broke up, as if this would somehow explain how I’d managed to contract the infection. I told him that that wasn’t necessary for him to know, and he told me he should have realized from the start how trashy I was and that I never deserved to be with him, along with a barrage of other insults. In that moment, I had my suspicions that he was right about everything. How dare I put his health in danger like that? I told him I was sorry for getting herpes and meant it, although now I see that he was just a dick. I hung up, relieved that the conversation was over, but anxious about the ones to come: Please don’t tell that rude dude, but, Rookie readers, I will divulge the following to you: I had sex with three other people in the herpes danger zone, so I had three more calls to make from Club Herpes HQ (everywhere I go, technically).

Dude #1: A high school boyfriend, with whom I had recently begun having mindless sexual escapades. He did not respond to my voicemail, so I eventually texted him about my situation. “I have herpes. You should get tested.” I thought that was pretty easy line of reasoning to follow. I never received a response.

Dude #2: My best guy friend, with whom I had recently had mindless sexual escapades. This was definitely a phone-call situation. We engaged in mindless small talk for a moment: “Heyyyy!” “Heyyyy!” “What’s up?” “Aw, you know”…until my brain couldn’t take the suspense any longer. “HeyIhaveherpes, youshouldgogettested, youprobablydon’thaveitanyway, butyoushouldgogettestedbecauseuhOKyeah.” I stammered out out the relevant details of my situation: when I’d been diagnosed, and the fact that I wasn’t super-positive if it came from him.

I girded myself for the worst. His first words were, “Are you OK?” He wanted to know how I was doing?? I started sobbing and said it was hard, but that I would be, which suddenly seemed truer than it had since my diagnosis—not everyone was as awful as 1980s Frat Dick! My friend proved this further by comforting me and telling me that it was going to be all right. He called me a week later to let me know that his test results had came out negative.

Dude #3: Actually…I didn’t make this phone call. This gentleman was a friend of a friend whom I met at a party. When I took him home, he was such an ass to me that I didn’t want to talk to him, and I mainly feel bad about the other people his potentially viral self had sex with after. HEY: Please do not do this. You should always disclose to your partners your STD status unless doing so could put you in actual danger, and the guilt I still feel about this choice is proof. This guy deserved to know his health status as much as any non-ass person!