A video premiere and interview about playing music with your sister (spoiler: it’s awesome).

An Artist's Guide to Dealing With Haters 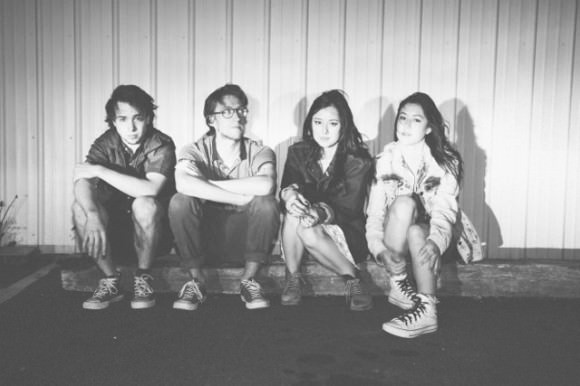 You know how before you get your drivers’ license, you fantasize about the moment when you can blow out of the DMV parking lot en route to a drive-thru (or your friend’s house, I guess) while blasting one very essential song that represents all the fun you’re about to have behind the wheel? Meet Tangerine, whose music would be just perfect for that moment. The band has recorded three EPs of gratifying, snappy, windows-down pop tracks—the most recent in the series, BEHEMOTH!, comes out October 28. In the meantime, we scored the video premiere for “You’ll Always Be Lonely”, which you can/should enjoy right here, right now!

Tangerine is the brainchild of the Justad sisters: Miro, who plays drums, and Marika, the band’s frontwoman. They joined up with the band’s guitarist, Toby Kuhn, and bassist, Ryan Baker, two years ago and have been playing together ever since. I got coffee with my old friends (I’ve known these guys since way back when!) to talk about the evolution of Tangerine, the radness of a musical sisterhood, and some strategies about starting a new band in your old town. For even more Tangerine, follow the band on Facebook or Twitter and check out their music on SoundCloud or Bandcamp!

DYLAN: I haven’t seen you guys since we were all young shredders and Miro, Marika, and Toby were playing all-ages shows around Seattle.

THAT’S CRAZY! How did you get from then to now, as Tangerine?

MARIKA JUSTAD: We started our old band, the Sutures, at the beginning of high school for Toby and me. Miro was still in middle school. Emotionally, we just needed a break, because we went really hard as kids. We had a lot of stress in addition to a lot of fun. We came back when the time was right about two years ago, after we met Ryan.

TOBY KUHN: We did a whole lot of nothing for a while! Kind of went to college, dropped out of college, decided we didn’t want to go to college… [Laughs]

MARIKA: Ryan and I finished college!

TOBY: We were always hanging outbut we definitely took a big, fat hiatus. I made beats—we all made electronic music in the meantime.

MIRO: That’s what you do when you don’t have a band: You create your own band with a keyboard.

How active have you guys been since you started?

MIRO: We’ve been in “go” mode since we started Tangerine. We put our all into it every day.

MARIKA: We didn’t really have a plan when we started. We just played some shows and ended up getting offers to come out more. Then, Ryan knows this guy with a little label who offered to record our EP, and suddenly we had an EP. All of a sudden the band was super legit!

TOBY: We put out two EPs in 2013 and tried to play as many shows as we could. After we released the second EP, we toured to South by Southwest in the spring, and that was a blast. That was my favorite experience so far.

MARIKA: We were warned SXSW isn’t the best for small bands, but we had an amazing weekend. We all think it was worth it.

TOBY: I could see how it could easily be not worth it, but we played awesome side parties outside the festival. All of us wanted to tour so damn bad anyway; it was worth it to get it out of our system!

RYAN BAKER: But we’re still itching to go back!

What are the benefits of having a new band in your same hometown, with most of the same people you’ve played with since you were teenagers? Does it give you a leg up?

MARIKA: Working with people I already knew is obviously great. In terms of getting a leg up, I don’t think so—we all removed ourselves from the local music scene. We had to cold-call bookers to ask for shows. We were complete outsiders, even though three-quarters of us were born and raised in Seattle, and Ryan was in the music scene for a while as well.

You have a new project coming out soon. Can you tell me about it?

MARIKA: BEHEMOTH! is our third EP in a series. It’s longer [than the others]: Seven songs instead of four. This is our most polished one since we did it in a studio—the other ones we did in a basement, which was fun.

TOBY: It would have been a lot more fun if…well, all I can say is there are a lot of cleaner basements out there than the ones we recorded in.

Is doing a bunch of EPs rather than a big record a better format for you right now?

TOBY: It makes sense from a “playing the field” standpoint, I suppose—not putting all our eggs in one basket, but continuing to write songs and needing to get them out.

MARIKA: An EP can be something you do just to be creative, or it could go further. It doesn’t really matter, in a way, because it’s a smaller output. We’re huge perfectionists. It took us a while to record these songs. We need a lot of time. There was one little three-note riff in this last EP that we spent a DAY debating. The producer was like, “You guys are ridiculous.” We would put a lot of pressure on ourselves to make The Perfect Album.

TOBY: I can’t imagine how much longer it would have taken if we were recording an album instead of an EP.

MARIKA: We’re avoiding that pressure by working on our songwriting.

TOBY: We have a pretty fat catalogue stacked up already with the EPs. We wrote the songs we’re releasing now around a year ago. By the time we release an album, those songs will also be about a year old, which is good, because we want that amount of time to think about them.

Marika and Miro, besides the music you’ve done on your own, any time you’ve played music with other people, it’s been with each other as sisters. Is it the best thing ever?

MIRO (totes jokin’): No, it SUCKS! No, it’s great. We’re on the same page in terms of our schedules and lives. We live together, practice in our basement, and look out for each other because we’re siblings. It’s nice to have blood ties in a band. It has its challenges, too. We’re not, like, Care Bears holding hands 24/7…

MARIKA: Even though we’re really different from each other, we have a lot of the same aesthetics. We’re totally going to form a coalition and take over. I’ve never played with another drummer.

Was there one sister who influenced the other to start playing music?

MARIKA: We fell into it naturally—I had always been interested in singing, and you gravitated towards drums as a really little kid, so our uncle gave her a drum kit, and we started playing together. We never discussed it; I can’t even remember anything before our first show when we played SoundOff! [Seattle’s underage battle of the bands].

Oh my god, I was totally there! Do you have anything to say to people who are the age that you were when you guys started?

MIRO: Don’t let your parents influence you too much. Listen to them, but also listen to yourself.

TOBY: But also don’t underestimate how good your parents can be for this shit! All of our parents were so helpful during our time in bands!

MIRO: Yeah! Just follow your own aesthetic, not your parents’. You can look up to them, but have your own tastes.

MARIKA: If you’re a young musician, you probably have a huge record collection and listen to a lot of artists, but don’t be overly influenced by specific genres and influences. Early on, a lot of people list off so many genres, references, influences for cred. You shouldn’t feel like you have to be dictated by that. Just do your own thing. ♦