After 20 years out of print, a punk classic is reissued—finally! 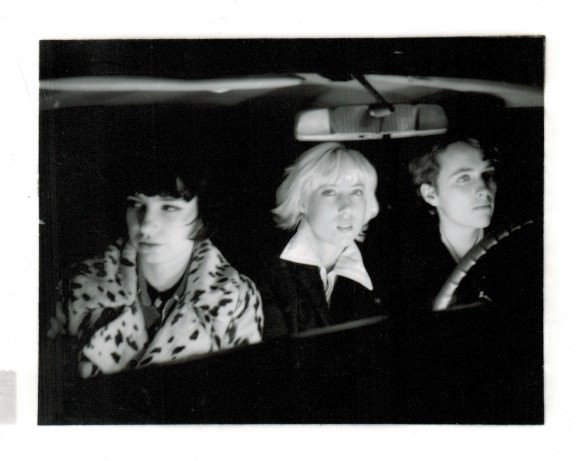 Christina Billotte has been part of two of the most throttling punk bands ever—first the teen rock band Autoclave, in which she played bass, then the punk-stomp trio Slant 6, for which she sang and played guitar alongside her compatriots Marge Marshall and Myra Power.

Slant 6’s first full-length album, Soda Pop Rip * Off, was released in 1993 and, though it’s still recognized as one of the most defiant and triumphant documents in feminist punk history, it’s been out of print for 20 years…UNTIL NOW. On October 14, Dischord Records is rereleasing the album on red vinyl, and you can listen to the whole thing right here, right now!

I recently spoke to Christina about growing up in D.C., being a “woman in rock,” and picking up her first bass.

PAULA MEJIA: What originally drew you to playing bass?

CHRISTINA BILLOTTE: I used to babysit when I was 14 for a friend of my parents’ who ended up getting deported and having to leave the country. He had this bass that I played a lot when I was babysitting, so he said, “Here, you can have it.” My dad had given me a guitar when I was really young, but I never got into it. For one thing, the guitar was an acoustic. But I also gravitated toward the bass because I could hear the bass lines in songs clearly and figure them out.

Mary Timony [later of Autoclave and Helium] and I played with some of the guys from Nation of Ulysses before they started that band. It was really hilarious and weird. I remember being at [one of their] shows and being told, “Sorry, man, Ian [Svenonius] only wants to sing if Steve [Gamboa] can play bass.” A lot of guys didn’t want to play with girls back then—definitely not more than one in the same band.

It was unspoken, but it was really like that. Not every guy was like that, but you felt it generally: Guys didn’t want to be in bands with girls. Everybody was willing to recognize problems like racism, but they were unaware of their own sexism. It’s so culturally ingrained. The other thing is, it’s not even just men. It makes me especially upset when women are sexist, especially women in rock. As if they haven’t benefitted from feminism! But for a long time, people didn’t even want to hear the word. If you said you were a feminist, as a woman, it was synonymous with being “crazy.” That’s only started changing recently. Now, it seems like feminism is back in fashion, which is a good thing. I hope it doesn’t swing back again.

I remember having an argument with this one guy who thought that a girl guitarist would never be as good as a guy guitarist because we don’t start playing guitar, or other instruments, as early as guys do. And I remember thinking, That’s ridiculous. What if a girl does start playing guitar earlier than a guy? I remember having this whole argument, and in my mind I was thinking, I’m going to prove him wrong. A little while later, he actually ended up recording a demo for Autoclave and admitted that he was wrong!

What was it like starting out in D.C. in the ’90s, when hardcore and Riot Grrrl were going on around you?

When I first started going to shows, early on, I didn’t see many women playing music. Going to local shows and seeing other teenagers—most of them were guys, but still, it was like, Oh, if they’re doing it, I can do it too. That’s what really inspired me.

I feel like a lot of what made things happen [in D.C.] back then had to do with the group houses. You could afford to live there, they had a lot rooms, and they were all within a mile [of one another]. It wasn’t like the scene was centered around a club, like CBGB’s. We would have shows in people’s houses. Now, it’s become really expensive to live [in D.C.], and there’re not a lot of places like that.

How do the songs on Soda Pop * Rip Off sound to you 20 years later?

I’ve actually gone back and listened to them every once in a while, just to check them out. They’re still relevant—the themes in the lyrics are still going on in my life and the lives of people I know. It’s really interesting.

I would say, go to shows and meet like-minded women! I just met people and started playing. For me, people saying stuff to discourage me just made me more resolute about doing what I wanted to do. I was rebelling, I guess, so I never felt discouraged. I just thought, They don’t know what they’re talking about. And, obviously, they didn’t. You have to trust your own instincts and do what you want to do even if people say you can’t. ♦

Paula Mejia lives in Washington, D.C., and writes for SPIN, the Village Voice, and Myspace, among others.