Sunday Comic: The Best Song Ever #24 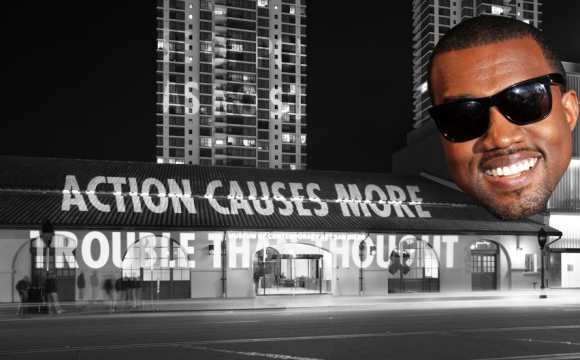 Flannery O’Connor once posited that “the basis of art is truth, both in matter and in mode.” Jenny Holzer and Kanye West—two of the greatest living artists and thinkers—have cornered the market on a certain mode: that of the existential one-liner. While they both create absolutely gorgeous things in longer-form mediums—Kanye in his lyrics, or Holzer in her Inflammatory Essays, for instance—both also use extremely short-form prose to illuminate concepts that linger in your brain for days, or maybe forever. This article, “15 Times Kanye West Sounded Like Jenny Holzer,” exposes the ways in which they’re operating on the same level of matter and mode, and that they deserve to have their art viewed in equal measures of enormous reverence.

This week saw the passing of renowned fashion designer Oscar de la Renta. The eternally influential clothier specialized in beautiful event dresses, which were worn by first ladies, diplomats, and the red carpet with equal aplomb. He began his formal education in fashion in his late teens at Balenciaga and Dior. After decades at a variety of fashion houses, he showed his first couture collection in 1993. He was known to be a warm, friendly person and an excellent friend to many of the women he dressed, as when he serenaded Sarah Jessica Parker with a full mariachi band, above. His legacy is worked into his garments and celebrated by the women who wore them. 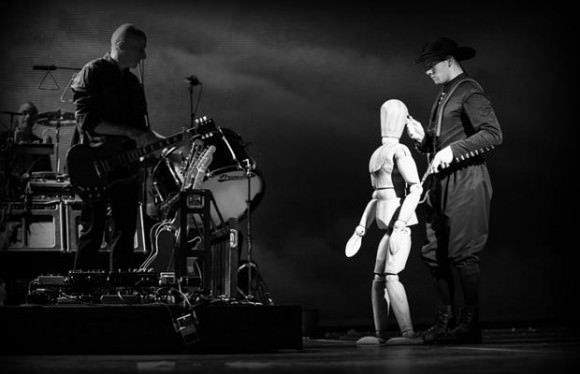 The goddess Kate Bush wrote an open letter to her fans about her second tour ever, which spanned 22 dates at one venue in London, and published it on her website this week. She called the series of shows “one of the most extraordinary experiences of [her] life” and expressed her gratitude for her creative team and her fans. Her live performances were a huge deal to so many people who grew up with her music, so the fact that it made her as happy as her audiences is lovely. Hopefully this results in international dates at some point in the very near future.
Gabby 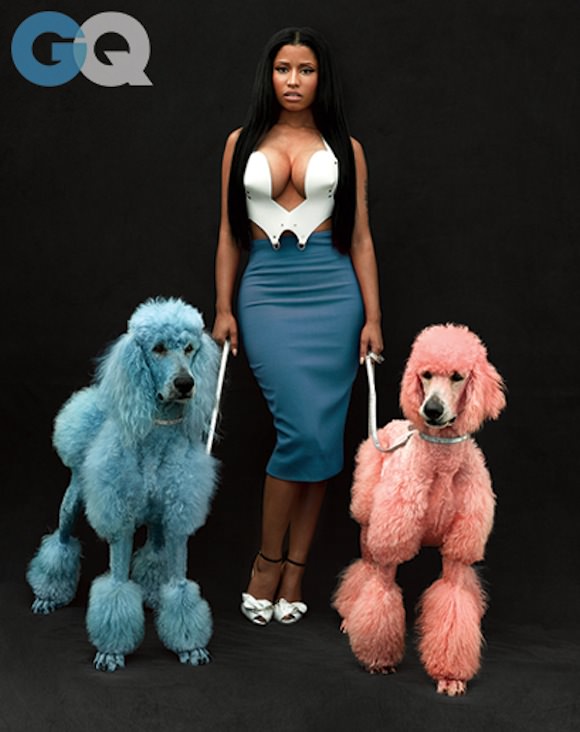 Photo by Mark Seliger for GQ.

I would like to get this excerpt from Nicki Minaj’s new GQ interview engraved on a commemorative gold plaque to hang above my bed:

“I like dealing with people, but I don’t really like a lot of bullshit, so maybe customer service wasn’t the best job for me.” She was fired from a waitressing job at a Red Lobster after she followed a couple who had taken her pen into the parking lot and then flipped them the bird. I asked her if it was a special pen. “No,” she said. “It was the principle.'”

While I didn’t really like how the author kept pitting Minaj against other female artists (after all, “When you stand next to a beautiful woman, who also sings, and not be insecure in who you are, you’re a queen, too”), I think this interview just confirms that Nicki Minaj is a genius who is so totally aware of the power she yields. Plus, it also mentions her eating Versace-print M&Ms and includes pictures of her posing with pastel poodles while wearing a leather bustier. Nicki Minaj is living her best life, and we’re so lucky that we get to witness it.
Stephanie

The Rookie heroine and writer Joan Didion will be the subject of a documentary titled We Tell Ourselves Stories in Order to Live! The project is spearheaded by her nephew, Griffin Dunne, who worked with Joan on her book trailer for her most recent memoir, Blue Nights. Dunne launched a Kickstarter to fund the film and has already surpassed his $80,000 goal–not a surprise at all since backers had the opportunity to get rewards like a pair of Joan’s famous sunglasses (they were $2,500 and are already gone, sniff). I’m glad the campaign has been such a success, because I can’t wait to see Joan’s life play out in front of me on the big screen. 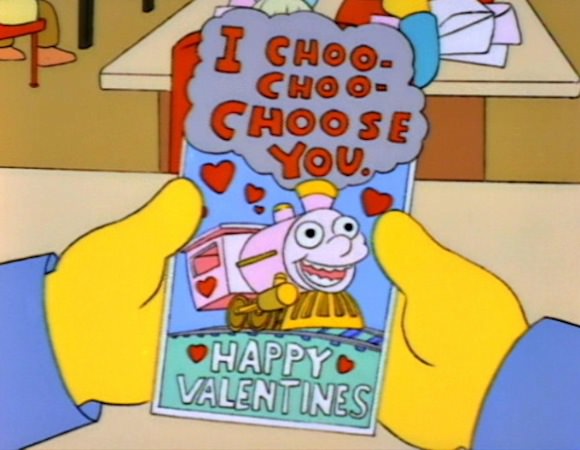 A still from The Simpsons via Simpsons World.

Do you love The Simpsons? Was the recent marathon of every Simpsons episode one of the best things to happen to your life? Well, here’s something EVEN BETTER: Simpson’s World, a website on which you can watch every Simpsons episode ever for free, whenever you want on your computer, phone, tablet as long as you have a cable subscription (or can ride on someone else’s)! Plus, you can see the popularity of each episode and there are fun extras, like this “15 Classic Ralph Moments” playlist.
Amy Rose

This week, I bugged out with the sheer radiant joy of mad rad people showing support for Rookie Yearbook Three, which came out a handful of days ago. Sorry for semi-shilling for this beauty, but also, I’m kind of just excited, because I think the fact that the Broad City heaux did a Friend Crush just for this print version of our web’s site is pretty 100 200 300.
Lucy

FKA Twigs may have actually managed to make Google Glass look cool in this video, which she directed herself. In perfect Twigs style, the video incorporates gorgeous vogueing, bizarre makeup (replicate it with this tutorial by Arabelle) and a crew of robot dancers, in a video that was filmed partially through the glasses. The effect is mesmerizing, and goes to show the huge range of ability Twigs has in any/every medium she chooses.

for the record, i was specifically joking about when people dress up like it's the kentucky derby for LES brunch.

In other music news that has become strangely dear to my heart, Julian Casablancas took to Twitter to clarify that he does not hate brunch, as previously reported by various hard-hitting news outlets. Plus, he wrote that he still very much enjoys performing with the Strokes, which to many fans (me included) is a great relief!
Brodie

OUR PRAYERS HAVE BEEN ANSWERED! In the third installment of Marcel the Shell With Shoes On, Marcel scurries out from under a plant to talk about grapes, his allergies and how “shrimps are the idiots of the sea.” Marcel was his usual warbly, excitable, sneezy self as he regaled us with a song he learned at camp that he sings “because my best friend lives far away.” This third instalment in the Marcel the Shell series, which started back in 2010 (aka AEONS AGO IN INTERNET YEARS), is out to commemorate the release of Marcel’s (and his creators’, Jenny Slate and Dean Fleischer-Camp’s) new book, The Most Surprised I’ve Ever Been. 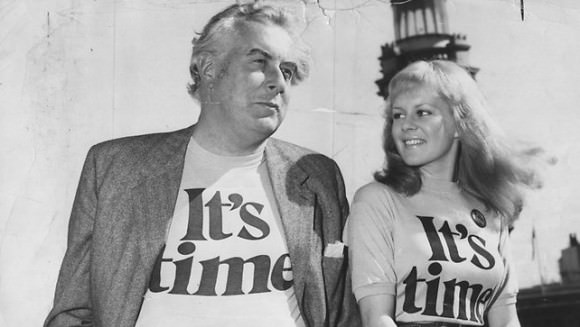 Photo of Gough Whitlam with the singer Little Pattie in 1972 by Graeme Fletcher/Getty Images via The Guardian.

This week, Australia has mourned the passing of Gough Whitlam, who was our Prime Minister in the 1970s. In just three years as the leader of our country, Whitlam made many important changes that have had a lasting effect on my country, including the introduction of universal healthcare and the Racial Discrimination Act, returning Australian troops from Vietnam, abolishing the federal death penalty, establishing government funded radio stations and arts councils that remain today and, one of the most important, the introduction of free university education. That sounds like a lot, but it’s really just scraping the surface of the positive changes he made to Australian society. Many tributes were given in Whitlam’s honor this week, and one of the most touching came from former Prime Minister Julia Gillard, who said he was “gone, grieved for, but never to be forgotten,” and left behind “a legacy to be celebrated.” RIP, you bloody legend.
Caitlin D. 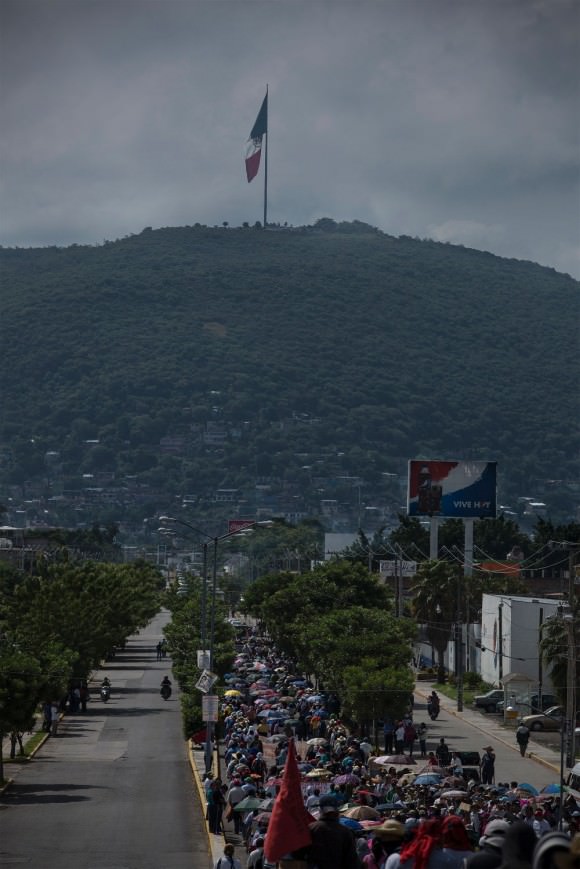 Photo of protesters in Iguala by Hans-Maximo Musielik for VICE.

Last month in Iguala, a town in the Mexican state of Guerrero, police officers arrested and disappeared 43 student activists. Their fate is now unknown. Iguala’s mayor went on the lam after facing accusations of collusion with local drug cartels in the matter. The horrific series of events has set off massive unrest. University students across the country went on strike for two days this week, massive protests took over the downtown area of Mexico City, and families and peers of the missing activists stormed Iguala’s city hall. Love to the protesters, citizens of Iguala, and the families and intimates of the missing.

This week, chatter about the actress Reneé Zellweger’s plastic surgery was a gross reminder that, though we demand pristine beauty from our Hollywood actresses, we balk at physical evidence of their pursuit of it. This piece deconstructs the public’s often-wrongheaded reaction to women who choose to get plastic surgery:

Of course Meryl Streep is still working and racking up awards, we say, smiling respectfully every time a younger actress states that their greatest goal is to share the screen with her. Of course Jessica Lange is the new face of Marc Jacobs, we nod, proud of our own progressive, subversive standards of beauty. We allow ourselves a few exceptional exceptions … if they’re pretty enough and we can believe that they would never sully themselves with a trip to a medical professional.

Loving this advice columnist’s All Hallow’s Eve beatdown delivered to a snooty trick-or-treat host. Free candy for ALL this holiday season! ♦