Rei Kawakubo pushes me to be my full freak self at all times. 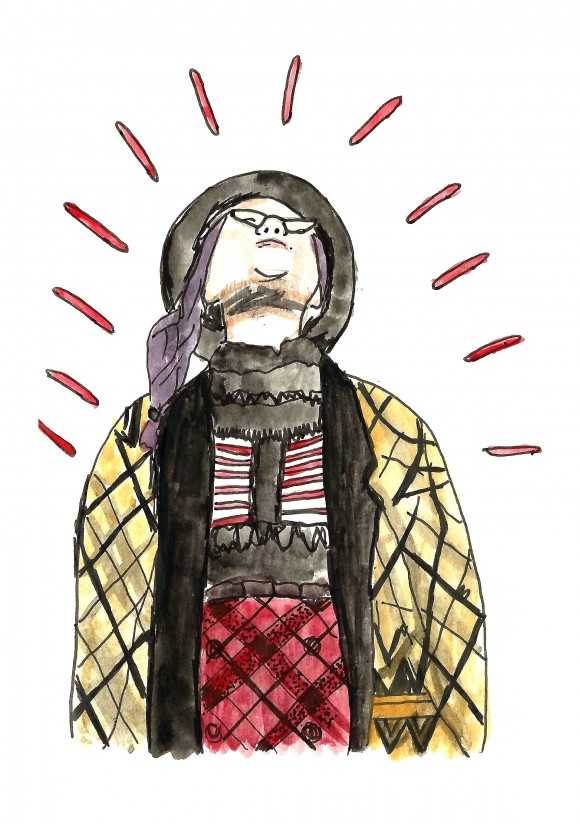 There are certain moments of my life that, as they’re happening, I know I’ll remember forever. My mind drowns out the rest of the world: Pay attention, it says. This is something you won’t ever forget. One Sunday afternoon in high school, I was lying on the floor of my old bedroom, flipping through the book Style Deficit Disorder, which included four pages dedicated to the clothing brand Comme des Garcons. The spread featured two models wrapped in gingham padded dresses from the 1997 Spring/Summer Collection. One wore what looked like a lumpen, mutated tablecloth as formalwear, and it thrilled me. I’m not exaggerating when I say it changed my life. It made my life. 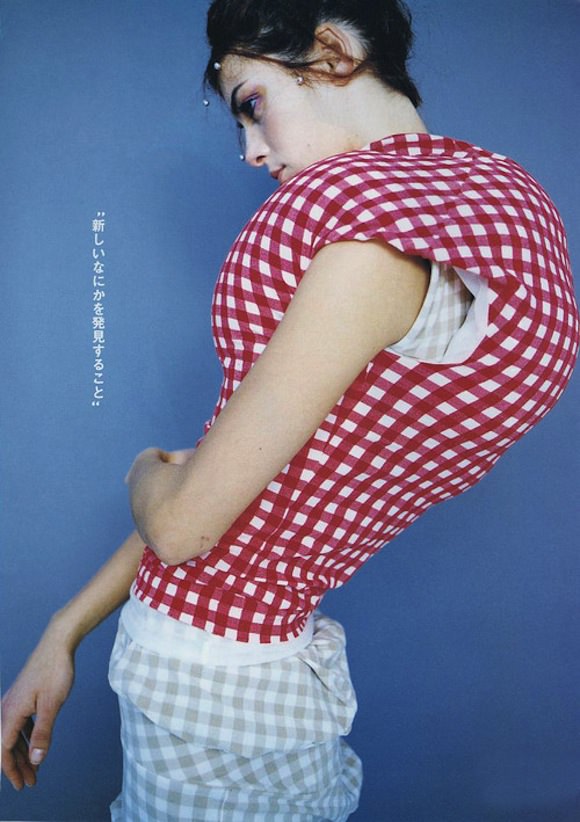 I had never seen anything as bizarre or beautiful (and kind of still haven’t). I imagined how the clothes felt to their wearers—how walking in those padded, humpbacked suits, so removed from others, must have been so strange and so comforting at once. I fantasized about the vital power and self-confidence their wearers must have had to be able to pull them off. And I wanted it. In those pages, I instantly recognized the kind of person I wanted to be: the girl in misshapen Comme des Garçons, standing tall and unafraid, unbothered by what others might think of her. (Three years later, I became her when I replicated CdG’s swollen tablecloth look at home, but that’s getting ahead of ourselves!)

In my obsessive research about the brand over the years, I became totally smitten with the singular voice and design identity of Rei Kawakubo, the founder of Comme des Garçons. Rei K. lives to stand alone. She’s one of the rare designers who own her company entirely (most of the famous ones, (like Dior, Louis Vuitton, and Marc Jacobs, to name just three) are owned by the luxury conglomerate LVMH, but not Rei Kawakubo’s). She answers to no one but herself.

Many of Comme des Garçon’s dresses have no traditional patterns. Many merely suggest where your head should go instead of having a clear neckline. Two jacket arm holes are not always enough for Rei Kawakubo—sometimes, she includes four for just one garment. I have some pieces she’s made like this, and it’s wonderful to be able to take one off as I walk, flip it over, and wear it in an entirely different way. Rei Kawakubo’s clothes reek of the knowledge that she is utterly unconcerned with external validation. She does not provide much explanation into her process. She hardly even gives interviews (I can count the ones she’s done in the past few years on both hands—and probably recite them from memory, too). 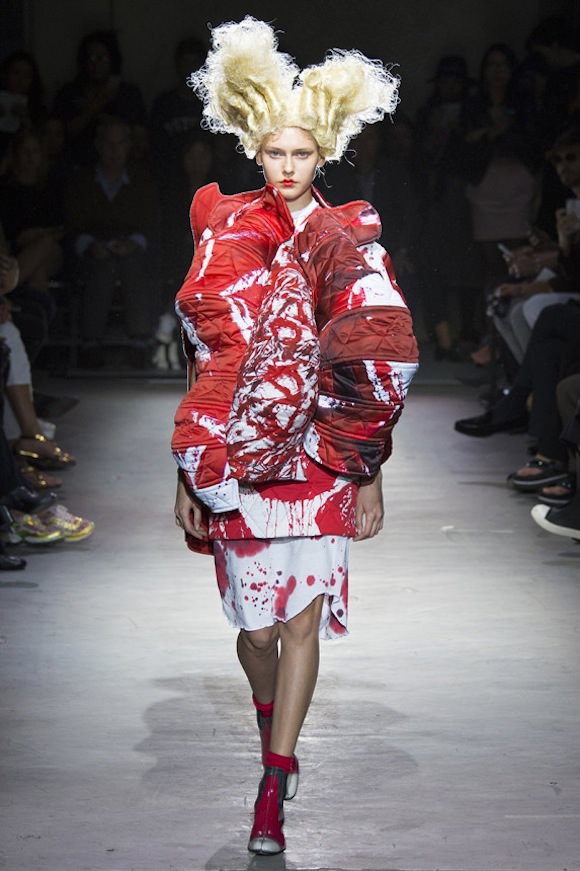 A look from CdG’s Spring 2015. Photo by Yannis Vlamos/Indigitalimages.com via Vogue.

In the beginning of Rei Kawakubo’s career, some critics didn’t like her designs. When her first Paris collection debuted in 1981, the fashion trade magazine Women’s Wear Daily declared it “Hiroshima chic,” and called her the “samurai geisha of fashion” in 1984 (she was born in postwar Japan, and fashion likes to fetishize both the unfamiliar and the tragic in a way that makes them most comfortable). She was pigeonholed as a purely “Japanese designer,” (always the Other, always some kind of “Asian sensation”). Decades later, she’s one of the most loved designers in the world—but she is never satisfied when her work is too warmly received, because then, according to her scant interviews, she feels like she didn’t push hard enough.

Kawakubo’s insistence on total independence was intoxicating to a socially awkward 14-year-old. Before I discovered CdG, I lived under the impression that the utility of clothing was absolutely only to fit into other people’s ideas of what I should be. I would wear a new identity every day to fit in: Ralph Lauren cargo pants to play with the boys on my block; a knee-length velvet dress to go to charter school and read horse books. If I was feeling snobby, I wore my one label-stamped article: a scratchy, beige sweater with the logo DKNY the size of a small child on the chest. (I felt like hot shit in that for years. I’m sure I still have it somewhere.)

But that was all before Comme. One glance at Rei K.’s creations quickly began to dismantle everything I thought I had known about fashion. She challenges you to think critically and keep moving. Sometimes, her clothes make you do the latter in a literal way. The first CdG dress I bought took me 10 minutes to figure out how to get on; the second took two other people to help me into. I wear it once a month now, a different way every time. It keeps surprising me: I shift it a little to the left, and the shape changes entirely. It’s breathtaking to know that every way you wear a piece is “right” simply because you’ve chosen it. You’re perpetually becoming something different, something other than you’ve ever seen before. Something more…because of clothes! 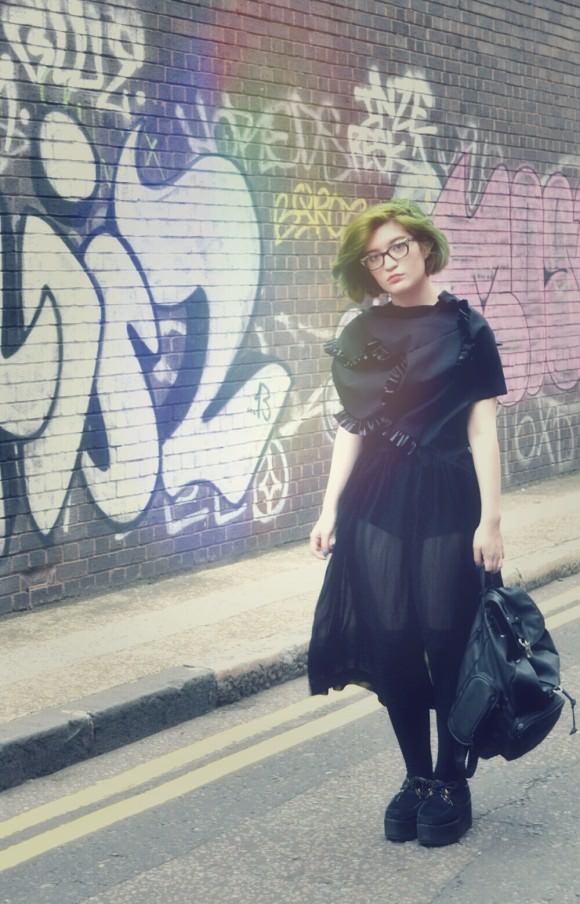 Arabelle looking lovely in CdG, 2013, via her blog.

At the Museum of Contemporary Art Detroit’s retrospective of her work in 2008, her one-liners were pasted on the walls and on pedestals made of bubble wrap. These included a design manifesto representing the opposite of what I used to think clothes were for: In 1983, Rei Kawakubo told the New York Times that she makes clothes “for the woman who is independent, who is not swayed by what her husband thinks.” Clothes hung from the museum’s ceiling and on abstract mannequins that didn’t resemble humans in the slightest. There was no glamorous spotlight, no immaculate woman-figure to idolize. There were just the clothes, floating, hung, empty of a body but artistic in execution– daring you to fill in the blanks. Become part of the art and story. It wasn’t exactly glamorous, but it was beautiful.

Rei’s wheat-pasted commentary and genderless presentation of the clothing at the MoCA show became my casual introduction to a kind of feminism where you can be enough—you can be whole in your difference from others. You have a story to tell in all your particular quirks and singularities, and no one can take that away from you. There’s so much strength in being able to stand alone and say, “This is all of me. Take it or leave it. I will not apologize for my existence. I will not explain myself for your comfort.”

I have a feeling that without Rei Kawakubo’s clothes, it would have taken a much longer time to realize I was queer. I identify with her designs because she queers fashion by destabilizing the meaning of clothes and creating her own ideas of what they stand for. I queer sexuality through my incapacity for picking one gender to be attracted to, or assign to myself. Kawakubo’s clothes made me feel brave enough to accept the parts of myself I otherwise thought were too strange to explore. Now, exploring those parts keeps me going. She keeps me going towards a future where I only answer to myself.

Like Rei, I want my work and identity—how I explore the space I take up, how I connect that space to others—to challenge people and make them think harder about the world around them. I want, and enjoy, to make people uncomfortable with the status quo. I want to soak up all my potential and make something bigger and better out of it. I want to change the world, and I want to do it on my terms, without apology. So I slip on a four-sleeved Comme jacket, I keep it moving, and I know I can conquer anything. ♦