Crack Your Brain Wide Open: An Interview With Lena Dunham

Grouper: Made of Air 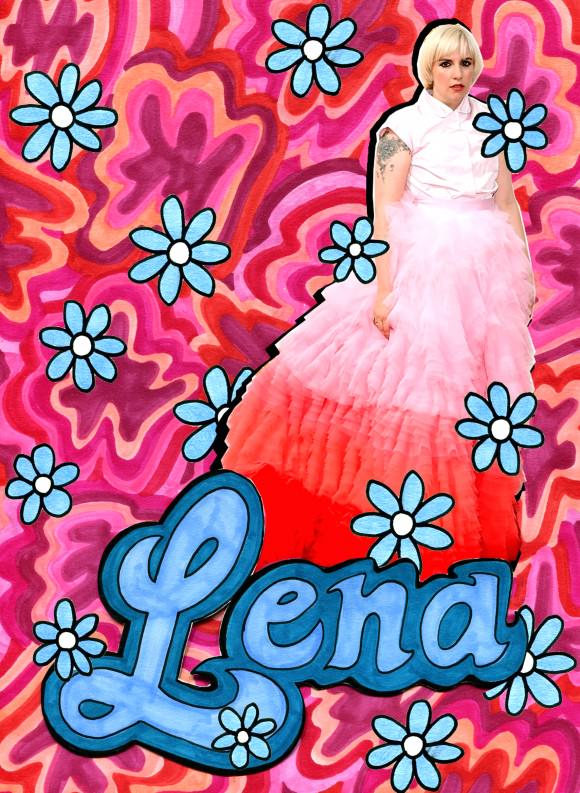 Collage by Minna, using a photo by Jeff Vespa via Getty Images.

I met Lena Dunham when I was in sixth grade. For a long time, I knew her as just this ridiculously kind person who was working on some sort of television project with my dad that I was not allowed to see. Then I got old enough to watch that project—her HBO series, Girls—and now I know what an important artist Lena is and why she inspires so many people. I admire her so much as an artist and a person. I don’t know if I am a good older sister, but I think I would make a good younger sister to someone like her. She is the big sister I have always wanted.

I was supposed to interview Lena about her new book of personal essays, Not That Kind of Girl, but I’m in 11th grade, and when I’m not doing homework I’m worried that I’m doing high school wrong. Frankly, I needed advice. Who better to ask than Lena, who is so good at turning her own experiences into perfect cautionary tales for younger people like me? Listening to her talk about her time in school gave me some much-needed perspective. It is so comforting to have someone you look up to tell you that everything will be OK and that you’ll probably look back on all the horribleness of high school and laugh, as impossible as that may seem right now.

We never really got around to talking about the book. (Which is great. You can read about it here.) I don’t regret it. If you’re in high school, I bet you’d have done the same thing.

MAUDE APATOW: Do you have any regrets about how you spent your time in high school, or about not appreciating your time there?

LENA DUNHAM: I try not to get into regrets, but high school was hard. For me it was just like, I have to make it through. I probably took too many naps. I probably should have done better at my homework. I’m just glad I got through it without anything terrible occurring. I still have nightmares that I’m stuck in high school again.

High school is kind of a nightmare.

I have nightmares where I’m back there, but simultaneously somehow also in my life now, and I’m like, How am I going to work on Girls and also do all my schoolwork?

I feel like I can’t do anything else—anything creative—because schoolwork, especially in 10th and 11th grade, is too much. It’s just…it’s stressful.

I know! The good thing to remember is that how you do in high school is not going to impact the rest of your life. How you do in college isn’t even going to do that. I mean, I think it’s really great to go to college, if you have the resources to do it. Do it! But there’s no way that not being great at math in your junior year of high school is going to make your life as a 40-year-old worse.

That’s what my dad says.

Your dad is one the most successful, prolific people I know, and his life as a college student was…well, you know! He quit after two months. My boyfriend didn’t go to college either. It’s funny, because when I was growing up, my parents were always like, “If you don’t go to college, you’re never going to be able to do what you want with your life,” and my boyfriend’s living proof that that’s just not the case.

What were the boys like in your high school?

I did not have a boyfriend in high school. I knew girls who did, and I was flummoxed by that, because I was like, How could you stand to spend that much time with these boys?! I had a couple of good friends who were boys, but they were all gay, so they had an extra special maturity. There were a few boys I thought were sweet and funny, but they didn’t want to have the kinds of conversations I wanted to have—or, when they did, the minute their guy friends were around, they turned into cretins and idiots.

Their guy friends come by and suddenly they’re telling fart jokes and making lists of who the “hottest girls” are. And you’re like, Wait: Five minutes ago, we were having a human conversation. What happened to you?

It’s so weird: You can be alone with someone and the second they’re around their friends, they change. They all get dumber and you can’t be around them anymore.

I got in trouble twice in high school for punching boys.

I never punched them in the face. I punched one in the stomach, and—

As hard as I am capable of, which isn’t very hard. I would get so angry at them because they would be saying such ignorant, stupid things. I would be unable to control myself, so I resorted to physical violence.

Guys in my high school are so pretentious. It’s crazy, but that’s my number one fear of college. I feel like guys will just be the same as—

I really didn’t meet guys who I adored and considered fully functional adults until after college. Which doesn’t mean they don’t exist.

I’m also nervous that I’m not enjoying high school, that I’m not going out and not doing the things I’m supposed to be doing.

As you get older, you’re going to become more and more confident in who you are. I just know that that’s the case. It’s going to get easier and easier and better and better. But the fact is that when you’re in the midst of high school…I remember having this feeling that reminded me of the first day of kindergarten—that feeling of I can’t believe I have to go to school for the next, like, 18 years. But it’s a fact that we start to miss things that we hated at the time. We become nostalgic for stuff that we just thought was just the worst. We all just do what we can to get through that time in our lives. Do you ever look at your little sister and think, I miss being that age?