An Intro to Kink

The sprinkles on your ice cream sundae of sex.

Friday Playlist: Tell Me There's No World Outside Our Own 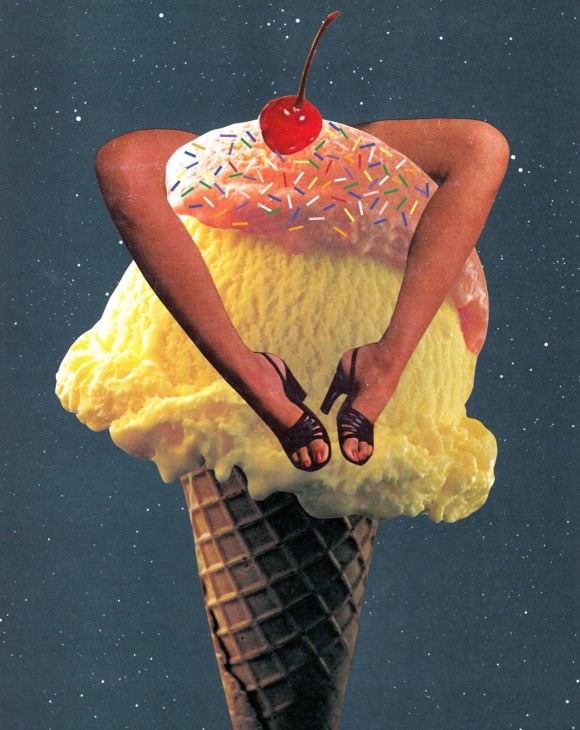 Sex is like ice cream. Yummy, delicious ice cream. It makes life a little sweeter and a little more exciting. And in the glorious ice cream sundae of sex, kinky activities are the toppings: not at all necessary, but, when you’re in the mood for them, delightful.

If you’ll allow me to push the ice cream metaphor a little farther, in the kink world, regular ol’ sex is referred to as “vanilla.” This is NOT to imply that “normal” or “regular” un-kinky sex is boring, because it is NOT. (There’s a reason vanilla is, year after year, the most popular ice cream flavor in the world.) For some people, though, it is simply a starting point.

Kink is enjoyed by people of all different sexualities and gender expressions and bodies and religions and ages. Unfortunately, our culture has a nasty habit of shaming sexuality, and female sexuality especially, so it can be difficult to consider kinky desires “normal.” If you’ve ever thought about supplementing your sex life with kink, it is NOT because you are perverted or sexually deviant—it is because kink is hot! It is crazy hot! And a heck of a lot of fun! Truth be told, kinky sex is also way more common than you think it is: Lots and lots of people have engaged in it at some point in their sex lives. If, by chance, you have ever been interested in what kink, and specifically BDSM, is all about…read on!

If the sadism/masochism part of that explanation scared you, let me reassure you that the ground rules of kinky sex are built on FUN and PLEASURE, which means no one should be doing anything that anyone else does not explicitly want them to do! You know how when you’re skateboarding or moshing or running a long distance, there’s an element of discomfort (physical, mental, and/or emotional) that not only is tolerable, but feels good? That’s the kind of pain I’m talking about here. Not everyone enjoys it, obviously, but no one is getting hurt in a way that they aren’t totally thrilled by.

Being dominant or submissive is an expression of your sexuality, and it doesn’t have to have anything to do with the rest of your non-sex life. People who are submissive are not pushovers, and people who are dominant are not scary psychopaths. In fact, some people like going back and forth between domination and submission; they’re known as “switches,” or “versatile.” Does the thought of telling someone what to do turn you on? Or have you ever wondered what it would feel like to be tied up while someone does delicious things to your body? This is where your private, personal sexuality comes into play—only you can determine how much power you are willing to wield or relinquish. As with a lot of sexual activity, experimentation is key, but with kink it is essential to experiment after some core issues are worked out, which is what we’re going to discuss next.

So, now that you’ve picked out a safe word and had a looong, thorough conversation about boundaries with a partner you absolutely trust, it’s time to Get Down. I’m going to describe some of the types of kinky play you can engage in, whether you’re having sex or not.

Bondage. Bondage means restricting a person’s physical movement, usually by tying them up or using something like handcuffs. But you can practice bondage with no gear at all, e.g., if a dom orders a sub not to move certain parts of their body. If you’re using physical restraints, place them at your partner’s wrists and/or ankles. NEVER restrain someone by the neck! I personally like using leather restraints with a lining (like these from Toys in Babeland) because they are comfortable and can be quickly removed. You can also use a body harness (I loooove Zana Bayne’s extremely sexy handmade leather and vegan jams). Using rope for bondage play is difficult and potentially dangerous if you are unfamiliar with the proper ways to tie knots, so I do not recommend it for beginners. And those plastic handcuffs with fake marabou feathers that you’ll find at cheesy sex-toy shops are absolute garbage and should not be used—for starters, they are easy to slip out of, which totally defeats the purpose, but also, they are not very adjustable, so if they’re too tight on you, they could actually cut off your circulation. Bad idea! Another bad idea: restraining someone and leaving them alone for ANY length of time. DO NOT DO THIS, and don’t let anyone do it to you!

Spanking. Loads of people of all genders like having their bums spanked either during intercourse, or as a foreplay activity. When spanking, use the palm of your hand, but keep your fingers together for more control and to avoid unexpected fingernail scratches. (If it starts to hurt badly in any way, shape, or form, use your safe word!) There are a variety of toys you can use to maximize the fun—paddles, riding crops, whips, and, my personal favorite, the cat o’ nine tails. After a good spanking sesh, I recommend a light butt massage to increase the blood flow (and because that whole area will be extra-sensitive and tingly afterwards!).

Humiliation. Humiliation involves the dominant engaging in mind games with the submissive, with the sole purpose of inducing sexually pleasurable feelings of degradation. This can be as simple as a domme calling a sub names, or as extreme as forcing the submissive to do some chore for them, like cleaning their room while the dom watches. When practicing humiliation, it is extremely important to remember that it is just play—if at any time you feel hurt in ANY WAY whatsoever or are having trouble processing what’s happening, detonate your safe word bomb immediately!