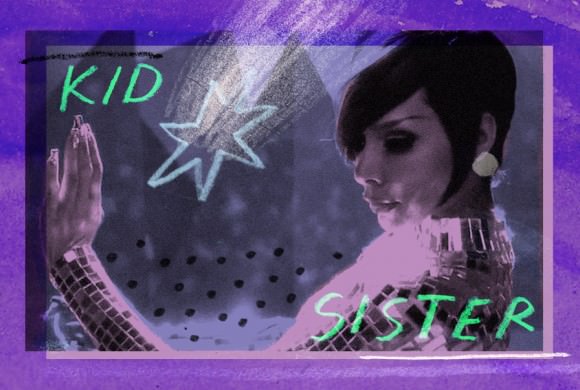 In 2011, when we last caught up with Melisa Young—also known as the rapper/songwriter/producer Kid Sister—she gave us some sage tips for getting through high school. This fall, Young introduced an alter ego named Jane Jupiter (Julianne went deep with her about it over at Wondering Sound), released an incredible new mixtape, debuted a shimmery video for a single called “Higher,” and started working on her second album. We recently talked to her on the phone about some of her latest obsessions, beginning with one that doubles as even more sound advice.

1. Manic Panic. I’ve been dyeing my hair a dark blue using Manic Panic, which is a vegetable-based hair dye. But did you know that you can dye almost anything with it? Including things you don’t want to dye, like your ears, your neck, and the white marble countertop in your bathroom that your landlord will be pissed about. You can also dye clothing items with it! I decided to try dyeing a pair of white pony-hair boots with Manic Panic, and it totally worked. So if you want to change the color of your shoes or whatever, just get some Manic Panic. It’s super cheap, and it’s super dope.

2. Style in classic movies. I’ve been obsessed with watching old movies, and specifically movies from the ’40s, ’50s, and ’60s because the wardrobes are incredible. I’ve been dressing a little more womanly as of late, and movies like High Society, The Group, Barefoot in the Park, and Mildred Pierce really speak to me in those terms. It’s like, Yeah, these are the looks I want to strive for! The clothing is SO amazing. In Mildred Pierce, in particular, Joan Crawford wears a dress that has these jewel-encrusted embellishments around the collar, and I’m like, Oh my god, I want it! I love anything that sparkles.

3. Chuck Taylor All Stars. I look at these old movies, and yeah—the costumes are beautiful, and I want to dress like that myself, but it’s also like, let’s be real. In my brain, it’s gowns and dressing like an empress, but sometimes I have to go to the grocery store. So I’ve started dressing in this kind of up/down way that speaks to my inner glamorousness but also is practical, and [that means wearing] a lot of dresses with Chuck Taylors. I’ve been wearing a really beautiful knee-length, navy-blue lace dress that matches my hair—because when you dye your hair crazy colors you have to wear clothes that match it or it looks not cute—with a pair of cream-colored Chuck Taylors. It’s how I reconcile being a real person with being the person I am on the inside.

4. Over-the-top snacks. I love ridiculous food, and by ridiculous I mean, like, Oreos wrapped in a blanket of white chocolate wrapped in a cupcake. Why would you do that?! Because it’s amazing!

5. Meditation. If you live in California, which I do, it’s hard to get away from the amount of New Age outlets and things to do. Everywhere you look it’s like, Of course there’s a store selling gems! I didn’t actively resist it, but I lived here for four years and didn’t get into it. Recently, though, I started to do meditation, specifically Kundalini meditation, which is also yoga. I think having a physical activity to do with [the meditation] helps because you’re concentrating on something while you’re meditating; it kind of eases you in, like hiding veggies in kids’ food. It puts me in a mind-state that feels pleasant and balanced and calm. I’m obsessed now. ♦