On facing fears, staying honest, and being labeled a “feminist band.”

Workin' for the Mouse 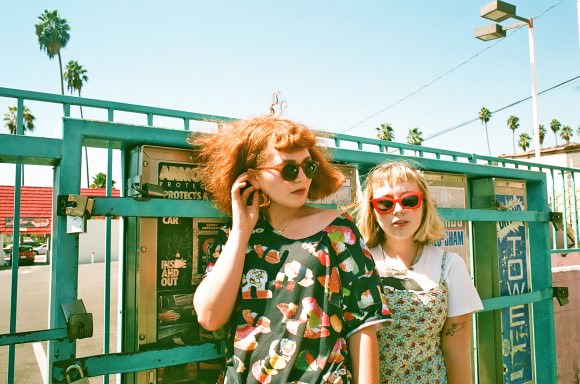 Girlpool is Cleo Tucker and Harmony Tividad, teenage friends from Los Angeles. Their latest song, “Plants and Worms,” premiering today in a beautiful new video by the artist Catleya Sherbow, is about accepting the world, no matter how scary or painful it can be.

I talked to Cleo and Harmony about emotional honesty, accepting different interpretations of your art, and the difficulties of having your work labeled “feminist.”

HAZEL: How did you two start making music?

CLEO: When I was a young kid, music always intrigued me and fascinated me. I think I was eight years old when I got a guitar, and I started taking lessons immediately. Music was always a thing that I loved, and that I could never live without.

HARMONY: My dad’s a musician, and he was always showing me his music. It quickly became pretty evident that music was the only thing that really mattered to me. I was good at things in school, but I didn’t have an honest or genuine interest in anything else. I started taking voice lessons and choir as a kid, and I would walk around my house singing from the moment I woke up.

And how did you start playing together?

CLEO: We were in two separate bands in L.A., but we spent a lot of time together, making music and jamming. It became a recurring thing.

What’s the inspiration behind “Plants and Worms”?

CLEO: “Plants and Worms” is about how scary life can be and just feeling afraid to step out of your comfort zone, and then realizing that’s how we grow. Being in uncomfortable situations and pushing yourself farther is how you gain strength. It’s about how much the world has to offer, and how coming out on the other side is more rewarding than staying comfortable. Once you jump in, it’s all worthwhile.

Was there ever a time when you were hesitant to go to some uncomfortable place in your music?

CLEO: I’m kind of feeling that way right now, because this is the first time I’ve ever been a [professional] musician in a band. It’s a new experience for me, and, like many new experiences, I tend to enter timidly, because I don’t know what to expect. These amazing Girlpool endeavors can make me uncomfortable and anxious. You feel scared about being away from home for so long, but then you just play and conquer that fear.

HARMONY: It’s always a struggle to open yourself to criticism. It’s important to check yourself to see how genuine you’re being.

CLEO: It’s difficult, because I spill part of myself into my music, and I get tripped up on that part being the only thing that other people perceive [about me]. It’s not my entire identity. I want my entire identity to be understood, not just part of it.

HARMONY: Every lyric gets put under a microscope. You’re being perceived by so many eyes and ears, and it can be frustrating when your exact meaning isn’t perceived by everyone. Even in interviews, what you say can be misinterpreted.

CLEO: This interview could be taken in a completely different direction than what we intended. And sometimes, with music, that’s totally the beauty of it, but at the same time it can be frustrating.

In your song “Jane” from your upcoming album, you make this sort of rallying call for boys and girls to never feel imprisoned, to always share their feelings, etc. How important is it to you to instill messages like that in your work?

CLEO: Instilling that message is an interesting way to phrase it. I think it is super important, but I’m not saying it for other people, I’m saying it for myself. But if it instills within others, that’s great.

Some of your older music deconstructs or confronts gender roles and femininity. When did you two start to explore definitions of girlhood, both society’s and your own?

CLEO: It’s an inevitable process of growing up. I wouldn’t say it’s something that’s ended, but at the time, which wasn’t very long ago—about a year ago— it was fresh in our minds. We were both exploring feminist ideals, and that was what we wanted to write about. It’s not our whole personality, it was just one factor.

Have people been referring to you guys as a “feminist band”?

CLEO: Well our EP had a couple of songs that explore the topics of gender and equality, so we were really easily labeled a “feminist band,” and that’s cool, because it’s what we were writing about. But why weren’t we labeled a “free-expression band” because of “Jane”? That blanket was thrown on us and suffocated us, making us this one thing. It’s a frustrating feeling.

You just want to be a band.

What advice would you give to young people who want to make music but don’t know where to start?

HARMONY: Just look inward. Be real and be nonjudgmental and be as genuine as possible. I read a quote the other day that my mom sent me that was like, “You can’t create if you’re judging yourself.” Talk about what makes you feel good in a way that’s serious.

CLEO: I would say just hop on the train. It’s going to be really uncomfortable, but you have to remember that every single step is part of the process of getting to a place where you feel satisfied in the way you’re expressing yourself. ♦