A Guy's Guy'd to Raising a Cool Kid 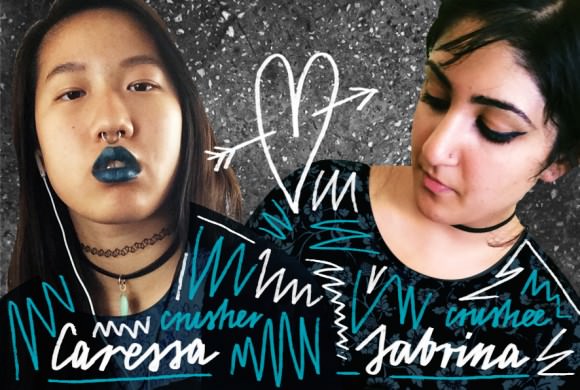 This month’s Friend Crush came to us in a most unusual manner. Usually, we get an email from one of you nominating your bestie for this feature, and we talk to both of you about your friendship—etc., you know how it goes. This time around, the email came from our own bossperson:

This girl sent these Snapchats to the Rookie account [@rookiemag, for you snappers]. I think it would be a sweet Friend Crush cuz she’s so obsessed with her friend and the guitar says I AM VERY HAPPY WITH WHO I AM.

Tavi was right. Read on and see for yourself!

Editor’s note: This is also the first time we did the crushee’s interview before the crusher’s. This is just because Sabrina was available first; don’t read any conspiracy theories into it!
ANAHEED: Hi, Sabrina!

Where am I calling you? Where do you and Caressa live?

We live in Arcadia, California.

Um, it’s pretty bland, I guess. Everyone here is kind of the same.

Everything here is very traditional. There’s just a lot of rules: Everyone’s gotta behave a certain way, and you have to go to a good school and get good grades and have a good career. There isn’t really anything else for us over here.

Did Caressa tell you how we got in touch with her?

[Laughs] Yeah. I was sitting next to her when she was snapping you guys. And then…did you guys screenshot her? That’s what happened, right?

Yeah, Tavi did. I know you’re not supposed to do that!

They are such cute pictures! Usually when we do a Friend Crush, we already know a lot about at least one of the people, because someone sent us an email telling us all about their friend. But we don’t know anything about you and Caressa, which is unusual and exciting. So, fill me in: How did you two meet?

We were in the same dance class at school last year, and I always thought she was cool, because she had this jacket with all these cool pins on it: I remember a Nirvana pin and a Velvet Underground pin, which are my favorite bands ever. One day I was sitting on the floor after class, putting my boots on, and she comes up and goes, “Hey, you know, you’re really cool, and I just wanted to tell you that.” I was like, “Wow, thanks, I think the same about you!” I remember she was wearing a Dead Kennedys T-shirt and blue shorts that were kind of high-waisted. It was like my favorite outfit ever! And I noticed she had drawn things all over her skin. She’s a really great artist…

What kinds of things had she drawn on her skin?

Like, pictures of girls and things, and little doodles and feminist stuff. I told her I liked them, and that I had some henna that she could use on to draw on herself, if she wanted it. Then she came over and we put henna on together and that’s how we became friends. I had henna because I’m Pakistani and it’s part of our culture.

Is your family from Pakistan, or were they born here?

My parents were both born and raised in Pakistan. My dad came to [the States] for college, then he went back to Pakistan. One day, he went to my mom’s house—he was meeting with her parents for some reason—and he saw my mom’s picture on a dresser, and he was just like, “I want to marry that woman.” And then they just got married! They were complete strangers. That’s how it worked back then.

One time I was talking to a woman [who was in an arranged marriage]. She was Indian, and I was like a bratty American, all like, “That’s so weird. I don’t get it.” And she goes, “Either way, you don’t know what you’re getting; at least this way, you can’t blame yourself.” Because no matter who you marry, they’re gonna be someone completely different in five years, you know?

Yeah, that’s true, actually. I never thought of it that way. I’ve always been afraid of having an arranged marriage. I’m afraid I’m gonna end up in one.

Because my mom and dad are both so traditional, and my mom’s like, “You might not have a career, so you should get married when you’re 18. I’ll find a nice guy for you.”

Are your parents Muslim?

Do they…are you Muslim?

Do your parents know that?

[Long pause] No. [Laughs] I’ve started telling my mom a few times, but she’s the kind of person that, if she wants to believe something, she will. So she just keeps saying, “Oh, you are, you are.” But I know that I don’t know.

Is there anything about what they expect you to live like, given their religion and values, that you feel like will be hard for you to do, or is about to become a problem for them?

Yeah, everything is so stressful. They have all these rules about clothes and people and morals and stuff.

So, after you and Caressa had that day with the henna, was it just like, bang, you were besties?

It kind of took a while. When we started hanging out, she was going through, like, some really big personal problems, and the people who were her close friends at the time weren’t very supportive of her. They weren’t helping her; they were just making the situation worse. I guess it was at that point that I started being a more important person in her life. Our main thing at the beginning was “We’re gonna have a band.”

What was your first band together called?

We wanted to do a Riot Grrrl, punk type of thing, so she came up with this cool name: +/-.

That was our name until we found out it was already taken. So now we’re Target Audience.