How to make people feel included. 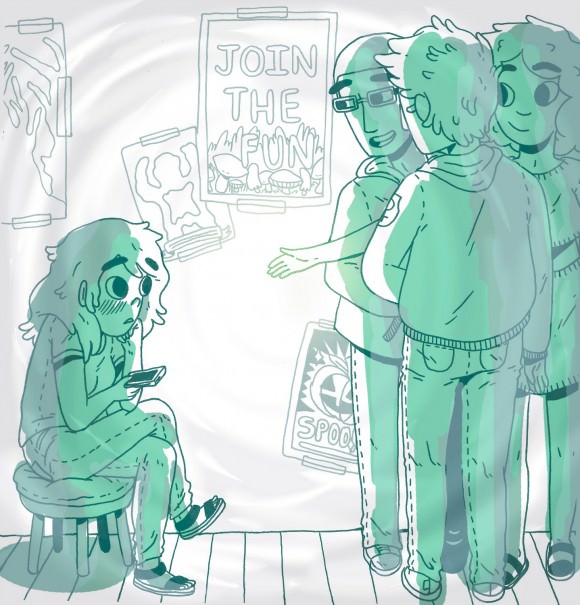 For one of our sixth-grade Fun Fridays (a once-a-month reward for good behavior and zero missed assignments), my middle school teachers took us to Wheels N Motion. Back then, Wheels N Motion was Green Bay, Wisconsin’s only roller skating rink, and everyone in town loved it—we kids had grown up spending every Saturday afternoon there. It had blue lacquered floors, a disco ball, and unbelievably cheap candy behind the counter where you rented skates. Full-sized Laffy Taffy sticks! Sour Punch Straws! Ring Pops! Everything was 25 cents! There was a live DJ who took requests, and the walls around the rink were thickly carpeted, which took the fear out of showing everyone how well you could “skate backward.” (You could not skate backward. No one you knew could skate backward.)

So, that Friday, I was having a great time, skating it up, when Kate*, a very popular girl, pulled me into the bathroom with Annie, another popular girl, and urgently whispered to us that when she hugged Aaron after their couple-skate, she had “felt his boner,” and it was, she pronounced, wide-eyed, “really hard.” Annie gasped. I tried to look appropriately impressed. I had no idea what she was talking about.

“Don’t tell anyone, OK?’” Kate pleaded, and I nodded solemnly, basking in the warm glow of a popular girl talking to me. As we were leaving the bathroom, a slow song started playing. The lights dimmed. The disco ball turned on, spinning light flecks onto the darkened rink floor. A boy named Jared made his way to me across the carpeted off-rink area, clumsy in his slightly-too-large rented skates, and asked me to couple-skate with him.

Jared was a boy in our grade everyone was mean to, for no particular reason that I can now recall. He was just universally agreed to be “gross,” and that meant he was banished from all social groups. I knew Jared was actually a nice guy; we had been partners in science once, and I found him a little geeky but nothing major—he’d just never learned the right things to say to other kids. And here Jared was, asking me to couple-skate with him in front of Kate and Annie, two of the most popular girls in school. They were right there, watching me. I knew I should say yes, because I had spent my entire life being trained to correctly handle this exact type of situation by my parents and our church. Instead, I looked to Kate and Annie for a clue on what they thought I should do. Their expressions were blank. Then I laughed, tossed my hair, and said in this INCREDIBLY NASTY VOICE, “Um, no thanks.”

Jared’s ears turned red. He turned to look at Kate to Annie, then turned back to me. “Oh, OK,” he said. His cheeks were flaming. He turned around and skated away, stumbling a little in his skates. Kate rolled her eyes at me. “Gross!” she said, giggling. “Why is it always the gross ones?” She grabbed my hand and pulled me into a group of “cool” girls to tell them what had just happened. Everyone laughed as she re-created the scene, exaggerating Jared’s awkwardness with her talent for spot-on mimicking. I was popular for a minute. It felt…gross.

I’m not trying to be dramatic, but this incident haunts me to this day. I remember everything super vividly: Jared’s face, his red ears, his too-big skates. And I remember how it felt to do something really shitty to another person. Later, I went home and prayed for forgiveness for a long time, kneeling in front of my bed. I knew what I had done was wrong, and I was sorry. I was so sorry.

What I had done was not only nasty, it was in direct violation of almost every lesson I had ever learned at church. I was raised a strict Mormon, a member of the Church of Jesus Christ of Latter-Day Saints, and, from the moment a Mormon can walk and speak to when they die of old age, they are taught to be thoughtful to others and include people. YOU ALWAYS INCLUDE EVERYONE. You are nice and kind to everyone; you do not leave anyone out, ever, for any reason, or make fun of someone more vulnerable than you, ever. If someone asks you to dance, you say yes, no matter who it is, because (1) it’s just one dance, and (2) it took a lot of courage for them to ask you. If you’re having a party, everyone is welcome.

Mormons go hard on inclusion. Does someone look lonely? Invite them along. Is someone new? Go sit next to them. Is someone in your group not talking much? Bring them into the conversation. A popular Mormon youth magazine called The New Era even published posters that instructed readers on how to include people, how to be interested in everyone you meet, and how to zero in on someone who’s out of the loop and pull them in.

At the time I was mean to Jared, I had five of these posters taped to the walls in my room. So I can’t say I didn’t know better. And after seeing with my own eyes the damage I was capable of, I never did something like that again. (Btw, I apologized to Jared at school the next Monday. He said he didn’t care and wouldn’t look at me. He transferred schools a year later. I am still so sorry.)

These days, as an ex-Mormon (aka a Formon), I have a lot of problems with some of the ideas and attitudes of the Mormon church in general, and I suspect that the heavy emphasis on including people was partially a tactic to recruit more members, but I will say this: The extreme focus that was placed on making people feel welcome has served me well in my life. Because those lessons were drilled into my head pretty much constantly for as long as I can remember, I now have a fine-tuned radar for detecting the odd person out, the person who feels uncomfortable or awkward in a social setting, the person who wants, very much, to be included but doesn’t know how. Because of all that training, I also know how easy it really is to include people who feel left out, and how great it feels to do so. You also get some amazing results: You make a lot more friends, which is the actual meaning of being “popular,” contrary to what any teen movie made between 1980 and 2010 would have you believe.

Mean Girls. Heathers. Grease. Jawbreaker. She’s All That. Carrie. Clueless. Never Been Kissed. None of these movies are about popularity, per se; they’re about cliques. And cliques are, by definition, about excluding people. I wanna talk about how to be the anti-clique. An anti-clique is a group of friends that is not closed off. An anti-clique is openly friendly and doesn’t prey on the weak.