You don’t have to be defined by four tiny years of your life. 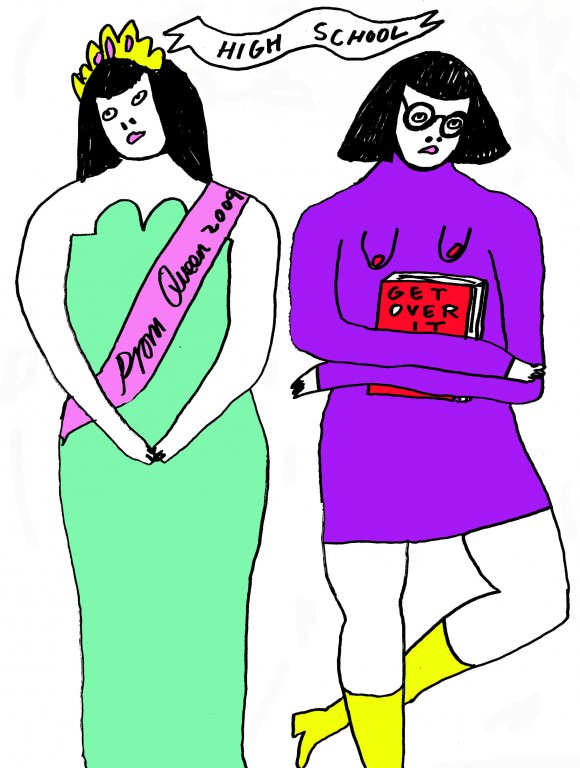 When I was in high school, all I wanted was to not be in high school. My classes and teachers were OK, but I hated my peers and could not wait to never have to see them again. I’d come home each day loudly complaining to my parents or Twitter or my dog that everyone at my school was a “total jackass,” that they didn’t get me and I didn’t get them and I didn’t want to. I was different, you see, and there was no way to bridge what I saw as the vast cultural gulf between me and my classmates. I wanted out of that hellfire ASAP—even though, in retrospect, it wasn’t a fire so much as an Easy-Bake Oven’s broken lightbulb.

Now that I’m in college, I see that whole time really differently. I thought I was such a weirdo in high school, but now I wonder if I wasn’t just trying really hard to define myself that way, based mostly on my musical tastes and my interest in art. I would do anything to differentiate myself from my peers—the people who had bullied me in middle school, told me I was ugly, and tortured me on the school bus with anti-Semitic and misogynistic jibes. I think I was so desperate to distance myself from them because I was scared that whatever it was that made it fun for them to torture quiet girls like me was a disease I could catch by standing too close.

There was very little that made high school bearable for me, but one reassuring thing was that everywhere I looked, popular culture was telling me that these people, the ones who made me so sad as a young’un, would be the real losers one day. “The prom queens and the football stars, their lives went downhill after they graduated,” John Waters told me. Before that, I had been weaned on the ’80s high school movies my mom loved, the ones whose characters had to navigate preppy vs. New Waver caste systems and in which the nerds were cool by the credit-roll. The message was that if you were afflicted with loserdom (shyness, singleness, ugliness, dorkiness, whatever), you’d eventually be redeemed, because you had earned it by suffering for so long. Get through the gantlet of high school on the bottom of the popularity scale, and the world will owe you: girlfriends, boyfriends, power, fame, etc. But high school for me was never nerds vs. jocks, or theater kids vs. popular kids, or whatever other subcultures the movies have but real life doesn’t. I was never sure what “popular” meant. The term suggested glossy pretty-girl threesomes or football jocks who ruled entire high schools with terror. Nobody terrorized my high school. In fact, the “nerds” were as rude as the theater kids, who were as rude as the football stars. (And they still are, as my and many other women’s experiences with “geek culture” indicate.)

Since my mom’s high school days, the “geeks shall inherit the earth” message has only gotten louder and more obnoxious. There’s even a recent book called The Geeks Shall Inherit the Earth. Now, the nerd who spent four years being alternately bullied and ignored will not only turn out to be hot and get the girl/boy, they are going to build your smartphone, write the next great American novel, and direct your favorite films. The rise-of-the-nerd narrative is so commonplace that it’s no longer possible to see nerdy kids as the underdog at all. Now, saying you were a nerd in high school is tantamount to bragging. All the cool kids are doing it: Jennifer Lawrence, Christina Hendricks, and Justin Timberlake are just a few of the countless celebrities who are sure to point out that they were picked on in high school in seemingly every interview they give. If being bullied makes you cool, then “losers” are the new popular kids, bullies are the new losers…and so-called “nerds” are the new bullies! ARGH CRAZY UPSIDE-DOWN WORLD!!!

In her essay “Memoirs of a Non-Prom Queen,” Ellen Willis wrote, “High school permanently damaged my self-esteem. I learned what it meant to be impotent; what it meant to be invisible. None of this improved my character, spurred my ambition, or gave me a deeper understanding of life.” This was my experience, too. Here’s the thing: High school leaves everyone with scars. Some of them may look like the type of glitter you can never totally scrape off your skin, but the point is, your teenage years are bound to stick with you in little horrifying or bittersweet pieces no matter what. I’m not arguing that high school isn’t important, because it is, but only if you let it be.

I hate the idea that what you were or weren’t in high school defines what you’ll be for the rest of your life. Because sometimes it does, but most of the time it won’t. The prom queen is not poised for failure because everyone liked her, and the bullied, nerdy girl isn’t poised for greatness because she was spurned. High school, like any part of your life, is a steppingstone to another point in your life. Did you know: This is how time works!

I read The Perks of Being a Wallflower in high school and loved it so much I took to the internet to fiercely defend the book against other people my age who were picking on its poetic prose (“In that moment, I swear we were infinite,” etc.) and making fun of kids like me who found it meaningful. When the movie came out a few years later, I was a freshman at a college I hated. I was a crying mess that whole fall, as I tried to sort out where I was going, because I definitely couldn’t stay where I was. Now, I knew full well that Perks wasn’t really a faithful reflection of what high school was really like—for one thing, not every person you meet in high school is a sexual-abuse survivor with a mental illness (though SOME people are, and why can’t there be stories about them, too?) (sorry, I lapsed back into one of those Internet Quibbles of Olde). The book and the movie are, admittedly, really distorted and romanticized depictions of what it’s like to be a teenager.

But when I went to the theater to see The Perks of Being a Wallflower in the middle of my college-freshman “I HAVE MADE A TERRIBLE MISTAKE”–style crisis, something about it—the school cafeteria, the scenes about making mixes, that feeling of being on the sidelines at a school dance where you don’t like any of the music—made me really miss high school, if only for a minute. I had only graduated the year before, and I was already letting movies warp my perception of what high school was really like. And I realized how easy it was for me to romanticize something that was never—absolutely never!—romantic for a single second that I was a part of it.

Can you forget high school? Maybe. Maybe not. Like I said, it’s gonna stick to you a little bit. But you are allowed to try. I know what it’s like to be 14 and think that high school is the whole world. What I needed when I was an embarrassing, wall-grazing 14-year-old was not for someone to tell me that the mean kids would get their due when we graduated. What I needed was someone to tell me that one day I’d learn not to care. Because when you get to that day, you will laugh. You will laugh at how much you cared! And when you go back to your hometown and hear about your old mean classmates who have flunked out of college for partying too hard or were arrested for stupid crimes, you won’t feel good, you’ll feel sad for them.

I am currently 20 years old and three years out of high school. That’s barely anything, but it’s something. This year, I cut ties with nearly everyone I went to high school with. It started with deleting the Facebooks of classmates I didn’t care about anymore, then I stopped following their blogs and hanging out with them during school breaks. One of those people had been my absolute best friend in high school. We had known each other since sixth grade, and no matter how many times people told me that my friendships would change when I went to college, I never believed it would happen to us. We were going to the same university—surely we would be inseparable for the next four years.

You know what came next. Gradually, we became (or maybe we just revealed that we always were) different people entirely. As she chased a music career and grew closer to her live-in boyfriend (who had gone to our high school), I made some great new friends and made more of New York my home. Over time, it seemed like our friendship had been based more on high school situational ease than on any kind of longstanding connection. It was just over.

And that feels weird! I know I’m young, and older readers will laugh, but I’m not talking to older readers right now. I don’t think anyone can deny that there’s something strange about looking around and realizing that you’ve grown completely out of an era of your life that used to feel all-important. I can no longer remember the boys who made fun of my clothes back then. I can barely remember gym class, even though it made me hate myself. What was once traumatizing just isn’t anymore. I am starting to basically Eternal Sunshine–erase my high school experience. And it feels good.

There comes a time in adulthood when it becomes embarrassing to talk about what you were or weren’t in high school—it’s like the college freshman who keeps talking about their SAT score during welcome week. I might reflect on high school for Rookie, but I am at that point in my own adulthood right now. Here’s what I can tell you: When you leave high school, instead of continually reflecting on what it gave you or took away from you, you can also just…forget about it. There will always be those people who want to hold on to their high school experiences and identities, who seem to still be defined by them, and there’s nothing wrong with that, because for them it may have been the best time of their lives. Thinking about high school might give them happy memories and personal confidence, or maybe it was just the time that most molded them, even if it was in the most devastating of ways! They’ll want to tell you about the hardships they went through, or get recognition for the goals they scored, back then. And I hope they get all of that, because they probably deserve it!

That’s their choice, though, dude, and it doesn’t have to be yours. When high school is over, it can, if you want it to be, be over forever. ♦