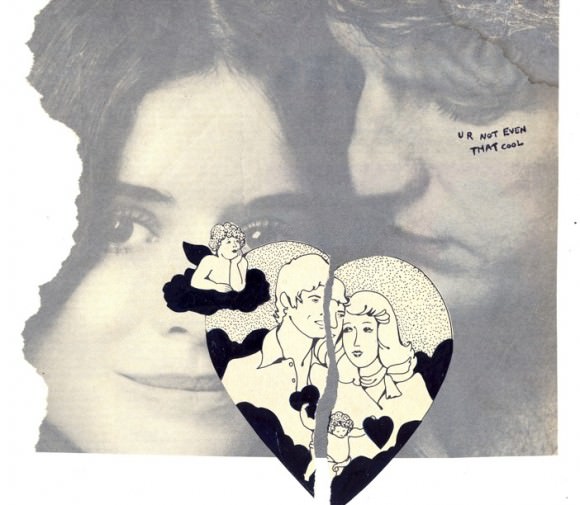 I met let’s-call-him-Robert at a friend’s house party last year. He was the tall, handsome lead guitarist in a pop-punk band that was getting a lot of buzz. He looked like every popular dude from high school that I hated, and so I assumed we would be enemies, because, even at 22, I still often felt set in my 10th-grade ways. I was surprised when he sat down on the couch next to me, started a conversation, and was interested in what I had to say. He asked me questions about myself! He was curious about my work! These might seem like low bars, but the last few men I had conversations with at parties were all really insistent on telling me about their novels in progress, and this guy actually seemed like he was listening to me instead of just waiting for his turn to talk. Also, he was super hot. That night, I told my roommate, “I think I met the best dude tonight.”

I didn’t see Robert for a couple of months. In that time, my mental estimation of his awesomeness grew three sizes. He was a fox. He got me—he really got me. I downplayed or forgot about the parts of the evening where he tried to explain to me that Sonic Youth, my favorite band, was from the Pacific Northwest and not New York. (“I have read literally every book about Sonic Youth,” I told him. “This isn’t a matter of opinion: you are wrong, it’s a fact.” Finally, he looked it up on his phone and said, “Huh. You were right. Goes to show how little I care about Sonic Youth.”)

I was full-blown smitten, deep into the Crushzone. When the same mutual friend invited me to another party a couple of months later, the first thing I did was ask my roommate, “Do you think Robert will be there?”

He was, and we flirted. He remembered things I had told him about my life since the last time we spoke and asked how work was going, and even made fun of the Sonic Youth thing. Finally I said, “When are you going to ask me out?”

I had done it. I was used to pining after dudes from a distance and having nothing come from it, but with Robert, it was on: I had asked him out, and it worked. I felt like I had solved the mysteries of sexuality, and my life would be easy street from here on out.

Our first date was fun. We got pad Thai, went to a bar with a DJ that only played female musicians, made out to Santigold’s “Disparate Youth,” and held hands in the rain. A week later, we went out again. This time, I was tired. I had been working all day. He was trying very hard to tell me stories about his band on tour about times they got stuck in crazy weather or the diners they ate at all across America. I thought these were boring. I was trying very hard to make funny jokes, something about the zombie apocalypse? (I told you I was tired.) He remained stone-faced. Later, after it felt like every other conversation topic was exhausted, we broached the subject of exes.

I said, “I’ve never been in a relationship before,” and he looked surprised.

“I don’t know anybody our age who would admit that,” he said.

His reaction took me aback—he had, at that point, seemed to have just rolled with every other detail I told him about myself, like when, on our first date, I told him I was on medication for anxiety. At that point, things went from bland to uncomfortable.

I did the only thing I could think of: I said, “Excuse me, gotta pee,” walked to the bathroom, locked myself in a stall, and proceeded to freak out. Here I was with a guy on whom I had been banking to pull me out of my rut of uncoolness, who would retroactively undo every awkward encounter I heretofore had with all men, and it—the date, myself, everything—was tanking. I texted my sister, “I think I’m doomed to be crazy and alone forever.” She texted me back the only possible response to that message: “???”

After hanging out in the bathroom stall for as long as I thought was doable, I returned to the table. The date ended soon after when I claimed I had a headache. We originally had plans to hang out that weekend—I was supposed to see his band play—but he texted me the morning of to say that the guest list was full and I didn’t question it.

I couldn’t figure it out. I always assumed that once I admitted feelings for my crush and he reciprocated them, we would hit relationships-ville. I thought, from watching both romantic movies and the popular kids in high school who seemed to have the dating game down, that if I found the right guy, all my problems would be solved. When it didn’t work out like that with Robert, I assumed the problem was with me: that I was too neurotic—too crazy to ever have a real relationship.

In my mind, every single guy I’m about to date is on par with me politically, totally progressive in his ideals, understands my jokes, likes sports without being a TOTAL bro about it, and knows all the best Simpsons episodes by heart (but can agree that the show had dipped in quality around season 10). They’ll never disappoint me, ever, give me a new outlook on life and love just by being with me, and live happily ever after with me in an exceptionally hot happily-ever-after. Every time I meet someone new that I have the least bit of chemistry with, I will gush to my friends, and talk about how great he is. This guy will be the one who will break me out of whatever slump I’m in. Then I start to date them, and all the ways in which they aren’t Absolutely Perfect Studmuffins From Planet Babe make themselves clear, and I get disappointed (sometimes to the level of faking headaches and bladder issues).

When I read Amy Rose’s piece about being a dream girl in August, I felt a pang of guilt. I recognized I had the same problems with a lot of the men she wrote about. I idealized dudes, building them up to be “better” versions of who they actually were and then convincing myself that anything would be better if they noticed me, liked me back, asked me out, kissed me, slept with me. That once it was proven that I could be desirable, that I could be liked or loved by somebody handsome and funny and normal, then I was GOOD AT BEING A WOMAN. As if I could use the infatuation as a place to become a better, more actualized person. Then reality sets in in the form of their ALSO being human beings with their own lives, tastes, and personalities.

Sometimes, the things I take issue with are complete non-issues that just mess with my expectations of who that person is. Once, I showed my favorite movie to the guy I was totally smitten with, and he declared it boring, and I very non-obnoxiously claimed that he just didn’t get it. I went out with this one hockey player that would unironically post whimsical aphorisms as his Facebook status updates (“~*~to the world you might be one person, but to one person you might mean the world~*~”), which I thought was unbearably cheesy. These were, ultimately, little things—shallow differences of taste that I told myself were significant that didn’t have anything to do with the quality of who they were as people. Relationships were never ended over these details; rather, as they surfaced, they forced me to confront all the ways in which I was subconsciously holding people to standards in which things like intelligence could arbitrarily be defined by what movies they liked, which has actually been really useful and edifying.

Other times, though, these dealbreakers are more about what kind of person the guy is, not just what he likes. I’ve gone out with dudes who seem totally chill until they break out comments like, “Oh, you’re not one of those feminists, are you?” I’ve had guys react callously when I tell them about my mental illness (“So….you’re crazy?”) Sometimes I go out with people who are perfectly nice, but who were clearly looking for different things at different times (I wanted something casual, he wanted something serious, or vice versa).

Crushes are great. I love crushes. I am not here to rag on crushes. It’s fun to feel giddy butterflies in your stomach, analyze text messages, and flirt like it’s a performance art project and you’re gunning for a Guggenheim fellowship. I have, at this moment, crushes on at least three different guys who I have no plans to ever talk to, ever, because I have more fun crushing on them than I think I would dating them. But I still understand that making that transition from ooey-gooey crush to actually trying to get to know someone on a romantic level means learning and accepting that they aren’t perfect, or not always who you’re going to want them to be.

Learning how to get out of my own when going out with dudes – well, it took (and takes) practice. But the more people I met, and the more people I made an effort to really know, the easier it became to stop holding them to some standard. In some cases, I dated a person for a while, and we had fun, but eventually it didn’t work for whatever reason and we split. With other people, we went on one or two disastrous dates and never spoke again. I don’t regret any person that I’ve gone out with, because with each one, I learned something about what I like, who I like, and what I’m looking for. The truth about Robert: I had a couple of a dates with a dude who was nice enough, but with whom I wasn’t compatible. It didn’t mean anything about who either of us as people. I haven’t freaked out in a bathroom stall since. That’s all. It doesn’t MEAN anything grandiose and telling about WHO I AM AS A PERSON. It’s fine!

Getting to know somebody new is always a trip—at least in romantic contexts, you have the added bonus of a potential makeout sesh. But dating requires keeping an open mind and be willing to not be hung up in expectations. Crushes are fun, but they are ultimately daydreams, fantasies (Trust: There are still gentlemen I swoon over from a distance —hi, foxy barista from my neighbourhood coffee shop who looks like Marlon Brando at his peak), but having a crush requires a certain self-awareness that the person you’re jonesing after isn’t necessarily real: They might just be a combination of things inferred from superficial interactions, then superimposed onto daydreams. Getting to really know somebody is exciting. Sometimes it’s scary. It might work out, or you might be in a situation where you never want to talk to that goon ever again. Whatever happens, at least it’s real. ♦