An Artist’s Guide to Dealing With Haters

Or, why Rookie’s comments section is the only one I will ever read. 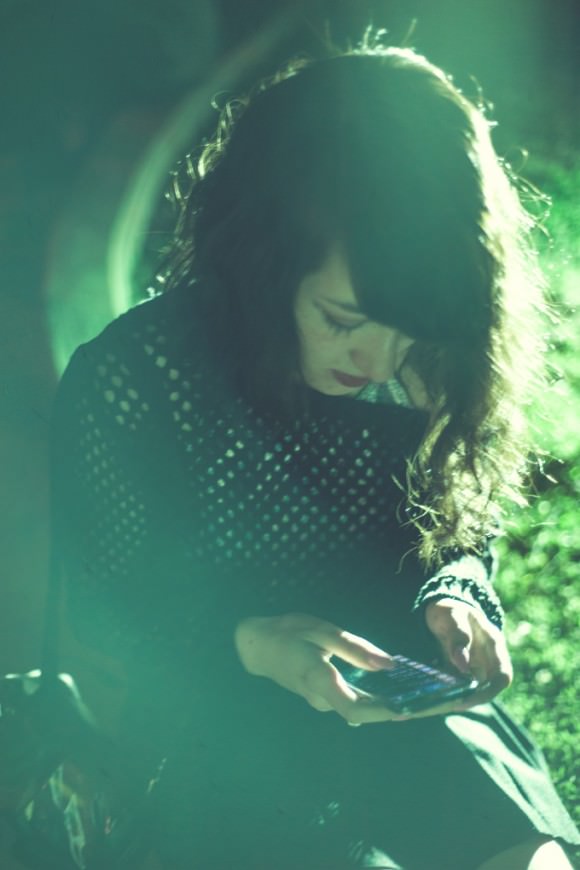 All of the photos in this post are ones rejected by Vice for the piece María Fernanda discusses here.

I started taking pictures when I was six years old. My photos from that time were mostly of the sea, because that’s what really moved me. I wasn’t looking for any kind of attention or reaction for my pictures—they were just for me, like a private journal in photographic form.

When I was 19, I had gotten good enough to start getting paid for my photography. I still based my subject matter on my emotions, only now, in addition to the sea (always the sea!), I was interested in people. I like taking an experience or emotion—sadness, friendship, breakups, death, love, etc.—and trying to capture it in a photo. These are the things that make me feel, and I think they’re what make us all human, so it’s important to be constantly noticing and thinking about them. 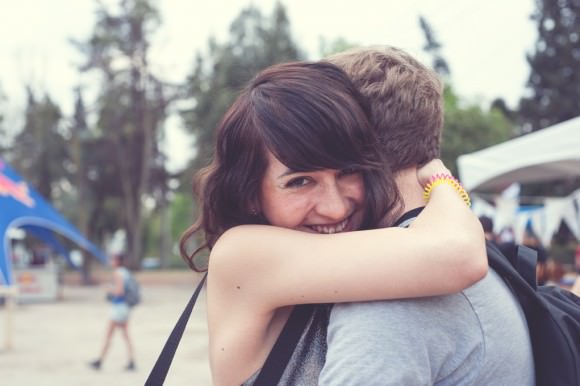 One thing had changed, though, since my early days as a photographer: Now that my photos were officially WORK, I had to show them to people—a lot of people, all the time—and open myself up to the possibility of criticism. Mostly, that’s been OK. Better than OK—well-meaning constructive criticism is just that: constructive. Sometimes a higher-up will tell me that my latest set of photos is flat, and I take that into account the next time I go out to shoot. Fellow photographers sometimes suggest different lenses or lighting, and I always welcome technical tips like that! Occasionally, friends of mine have told me that they don’t like to look at my photos because they’re “too personal”; that’s also fine with me, because I know my work isn’t for everyone. No one’s is! Even when I’m being paid, my first priority with my work is to make something I’m happy with and that helps people appreciate their friends more, or understand their pain better, or get in touch with their love for their dog or their cat, or just to connect better to everyone around them. That’s a tall order, I know, but if I can come close to accomplishing any of it, I don’t really care if it’s not everyone’s cup of tea.

I think it’s important to get all of that out of the way, so you don’t think my reaction to the incident I’m about to tell you about was in any way a result of my being unable to take any sort of criticism, or thinking that anyone who doesn’t like my work is wrong! 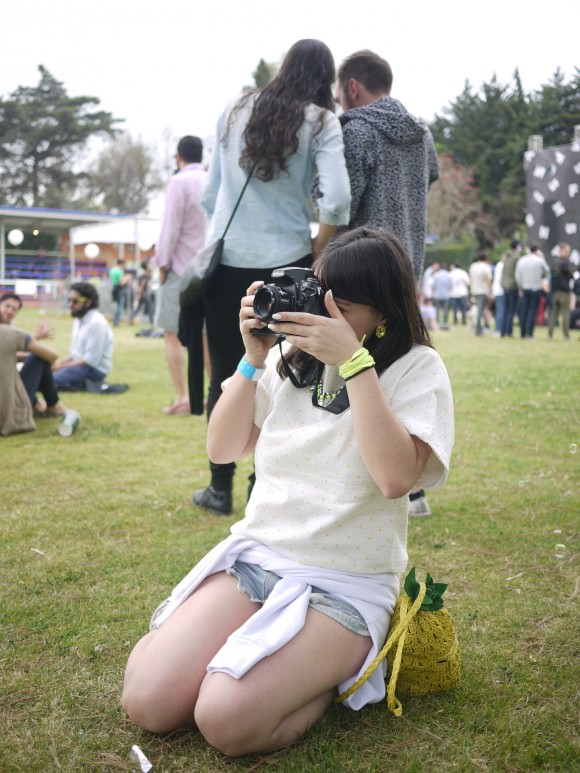 Last spring, Vice asked me to go to Festival NRMAL in Mexico City and document “a girl’s” experience at a music festival: waiting in line for hours to use the bathroom, lugging all our shit around in our backpacks and handbags, dealing with annoying guys, maybe kissing someone new. I thought this was a pretty cute idea, and I decided to make my friend Carmiña the star of my photo set.

Carmiña and I selected the photos and wrote the captions together, and I was happy with the whole thing. My editor at Vice was happy too. “Awesome, I love it,” he wrote.

When Vice posted the pictures the next day, I was excited. The first couple of comments were neutral to positive (“first thing I’ve liked on Vice”), which I was psyched to see. I shared the link with my friends and went to bed feeling proud of myself. 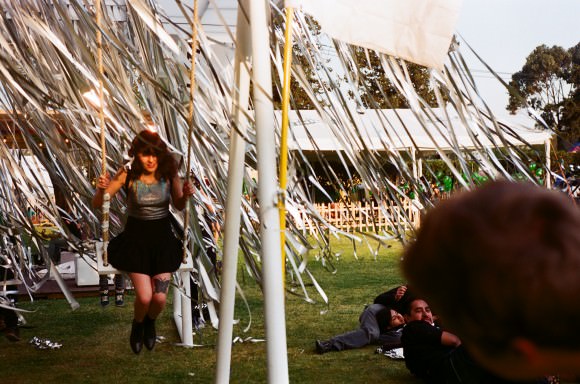 The next morning, I checked in on the site again. This time there were a TON of new comments about my post, most of them really negative. “You can tell that all these worthless Vice reviews about NRMAL are by girls who are there to have fun and get fucked up […] but they can’t post a good, quality description of the event […] which basically brings up the whole worthless situation of Mexico, culturally speaking,” said someone called David Davidson. “This person doesn’t know how to write,” Luisa Luisa opined, “and it’s not even a story that should have been published.” Ilda Nagasaki added, “And how is this relevant? […] This writing is a piece of shit btw #viceusedtobecool.”

I’m not sure what I expected, but these comments (and about a hundred more like them) really stung. I’m not a writer, and the piece was mostly my photos, with short captions I added per Vice’s request. What was worse was that some of the commenters were attacking Carmiña, saying she was “stupid,” a “bitch,” and “not beautiful” enough to be featured on Vice. 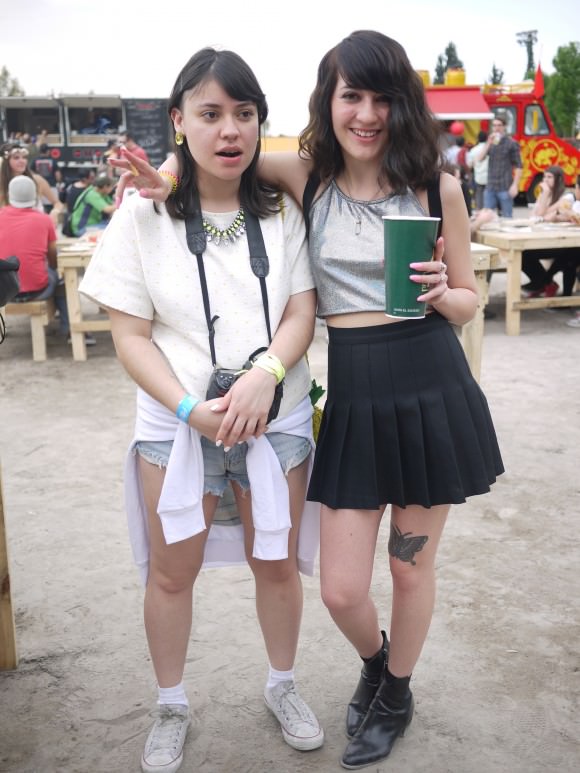 I didn’t understand why people were being so vicious. I’m aware that Vice is known for racier material, so maybe people were expecting pictures of Carmiña dancing naked on a speaker, but I thought they would appreciate that I was giving them something realer: the regular day of a regular girl at a music festival. I thought some people would be able to understand that I was trying to show how concerts are different for girls, because sometimes you get your period and you have to carry your own tampons and toilet paper around; and sometimes you want to look pretty in pictures but you’ve been sweating, dancing, and possibly drinking or taking drugs; and you have to choose your clothes carefully so you don’t get cold but also so you won’t have to carry a big jacket around in your purse; and on and on. I thought I had expressed this well in my photo set, but apparently I had not, because everyone was like, “It’s not cool to say you take drugs to get attention,” or “What the fuck with Carmiña—you should be writing about the FESTIVAL.” Some of theme even made MEMES of Carmiña, mocking her for being a “stupid hipster.” 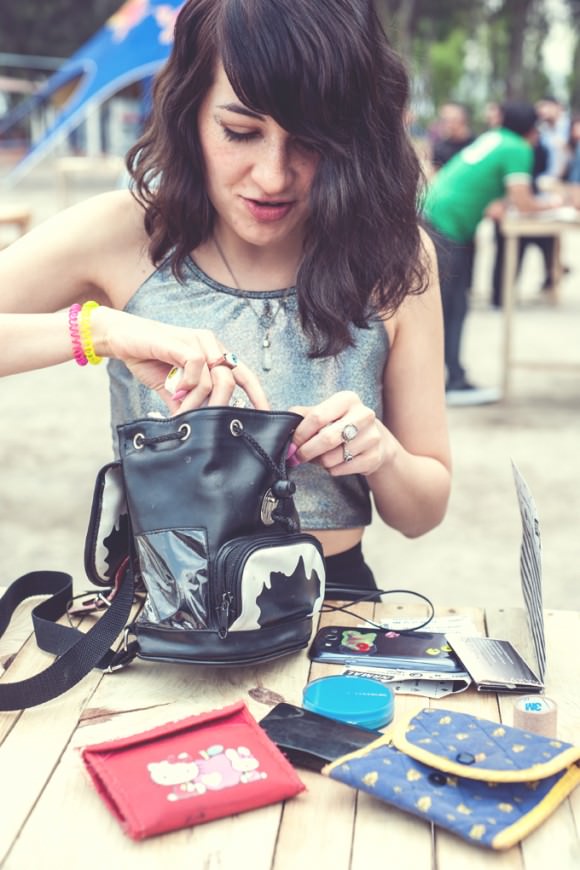 It wasn’t like I expected everyone to love me. I know what the internet is like, and I knew I’d get some haters. But this overwhelming deluge of people telling me that Carmiña and I were “idiotic” “hipsters” really hurt. I guess they wanted a fantasy, and were disappointed that I served them the truth instead. I felt misunderstood, and I started getting really insecure about my work. I also started hating people in general! Especially people my age, who are most of Vice’s demographic. I couldn’t understand why people felt the need to make fun of everything, to judge everything negatively, without ever taking a moment to say anything positive or even just understanding or constructive. I think I cried for most of that week.

(I feel I need to take a moment to single out Rookie as an exception to all this! Every time I read the comments by you Rookies, including the ones that aren’t 100 percent positive, I feel so proud and happy to belong to this community.) 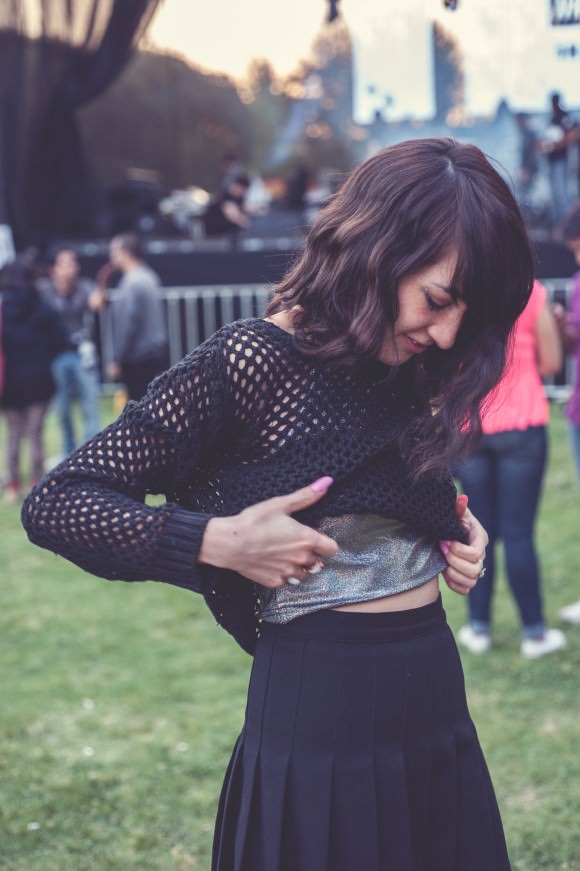 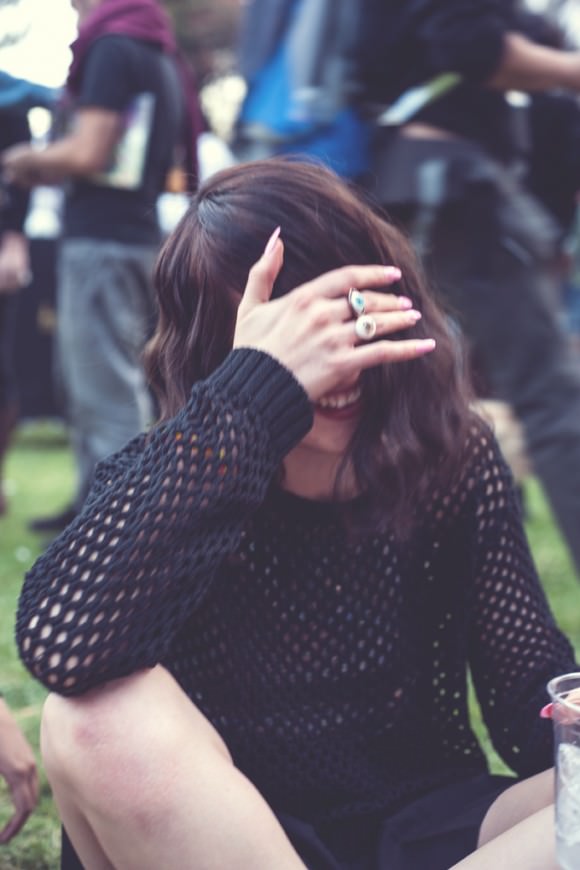 Now, seven months later, I still hate what happened, but it did make me stronger. It made me remind myself that everything I do is for me—not for a magazine or fame or a commission—and that I take pictures because it makes me happy. It reminded me how lucky I am to get to do what I love, and that I have chosen this path—no one forced me to do this. It also made me appreciate anew the people who support my creativity, even when that means telling me they didn’t like something about a particular set of photos.

What it didn’t do was make me stop putting my work out there. I take photos to help me and others feel more connected to everyone else, and I share them for the same reason—not for praise or money (though needing the money is another reason I can’t not share them!). 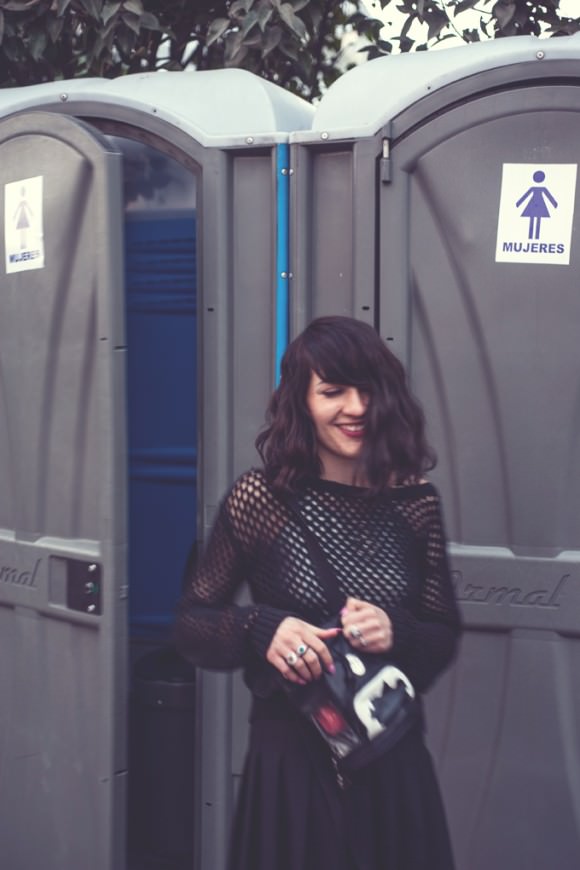 If you find yourself in a similar situation, here’s my advice: 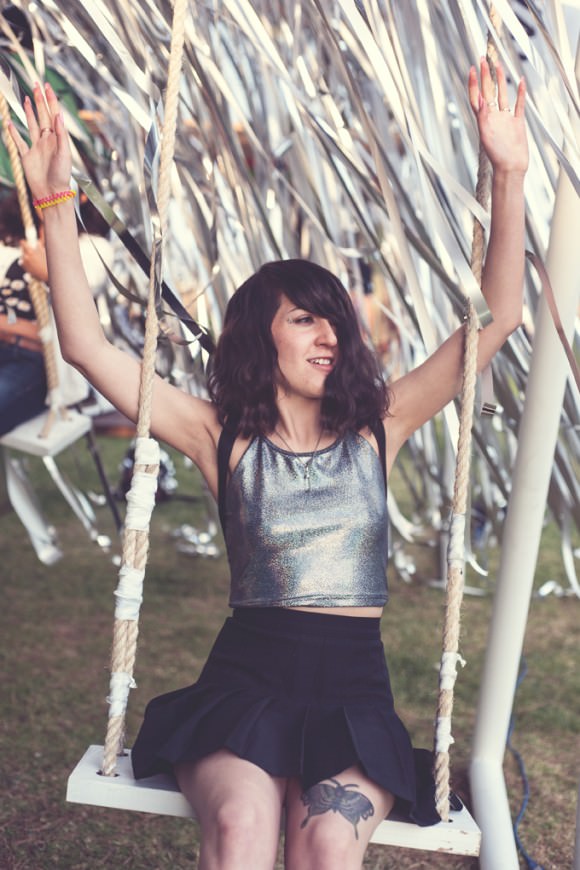 I don’t feel sad about this incident at all anymore. I even kept working for Vice, and the comments on my later shoots, while still not exactly glowing, didn’t totally misconstrue the photos themselves (“I hate her style” and “All the pictures were taken with flash—she’s an idiot” were typical). I used my feelings about that first shoot to motivate me to work more and work even harder, because that’s more important than sitting in front of a computer and complaining. I will keep on showing the world my work, because it’s an expression of my love for the world. I’m proud of what I do, and I’m not ashamed of who I am. (Besides, that Vice piece was their most-seen post that whole week, with 1,200 Facebook likes and 90 comments, so bow down, bitches.) And, finally, that incident led to this piece, and I feel good that you guys let me share it with you. Thank you! ♦

And further thanks, from the editors, to Caitlin D. for translating the comments on Vice Mexico.