An interview with my mom, a workers’-rights advocate. 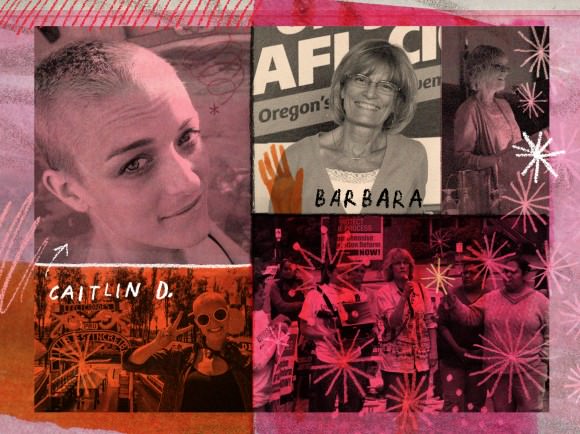 Many moms are awesome, but my mom, Barbara Byrd, is kind of next level. She’s the secretary/treasurer of the American Federation of Labor and Congress of Industrial Organizations (AFL–CIO) in Oregon, an umbrella organization for American labor unions (groups of workers who band together to protect their collective rights on the job). She’s also a tenured professor at the University of Oregon’s Labor Education Research Center, where she teaches union members how to become better leaders and activists. Like I said: She’s awesome.

Unions are important! Without them, we probably wouldn’t have a minimum wage, a standard eight-hour work day, or worker’s compensation, which helps out with medical care and salary if you get hurt on the job and are unable to work. But a lot of us learn about labor unions through super-slanted mass media coverage, or not at all.

I am lucky enough to be the daughter of a mom who has pretty much dedicated her life to social justice—I grew up hoisting protest signs on picket lines and learning the words to the classic labor anthem “Solidarity Forever”—and when I recently asked to interview my momma dearest about what you need to know about unions and the labor movement not only in general, but for yourself at your job, she was down to share her knowledge with all of us—as is her typically awesome way.

CAITLIN D.: What is a union? What does it mean when people say “the labor movement”?

BARBARA BYRD: A union is the result of a group of workers getting together and deciding to act collectively to solve problems where they work, improve their working conditions, or get higher wages from their employer. There are lots of ways that unions come about. Workers might create their own organization, or call up other local unions to see if they can get involved—these are groups like the Hotel and Restaurant Employees Union, or the United Automobile Workers. Just about every job you can think of has its own unions: grocery cashiers, dock workers, librarians, zookeepers, bookstore clerks, and so many more are involved with them.

To unionize a job, the workers vote for or against it by secret ballot, and if the majority of the employees are in favor of unionizing, it’s put in place. Unions are designed to be very democratic—they’re run by members who decide they want to be involved, even down to writing the bylaws.

“The labor movement” is the power that comes from a lot of working people and unions coming together and working toward a common goal, like improving health care benefits or advocating against workplace harassment.

Why do we need unions?

Without unions, working people are at the mercy of their bosses. If you have a good boss who pays you well and treats you fairly, great. But if you do something they don’t like, you can find yourself out of work pretty quickly—even if it’s not a fireable offense.

My dad always used to say that when he joined his union, the Newspaper Guild, he was finally able to tell the boss he was wrong. He worked at a newspaper in San Antonio as a copy editor and made very little money. His boss was very disrespectful and dismissive of him and his work, even though my dad was good at his job, and my dad was worried he would be fired if he stood up for himself or corrected his boss when he was wrong.

He helped organize a union, then became a national representative of the Newspaper Guild, traveling around the country and helping others in similar positions to the one he’d been in. He often said to me, “Making more money was important, but more important was being able to earn a living, give my opinion, and not be vulnerable to losing my job.” It gave my dad the ability to take pride in his work. So sometimes it’s about the money, but it’s also about giving workers a greater sense of self-respect.

What are some major victories that have been scored by unions, historically?

Giving people the ability to hold their heads up at work is the real victory! Another major one is a legally mandated minimum wage—what you have to be paid in order to afford basic housing, food, and transportation. For an individual in Oregon, the minimum wage is a little over $9 now. Unions in the United States have also created or improved workers’ health insurance, pensions, grievance procedures (official ways to complain when something unfair happens to you on the job) worker’s compensation, and overtime pay. And so much more!

How did you get involved with the labor movement?

I started learning about unions from my dad when I was young, but it wasn’t until I was in my mid-20s that I had any direct experience with them. In the 1970s, not a lot of women were active in the labor movement. Most “women’s jobs”—clerical ones, especially—were unorganized, so women had little contact with unions.

When female workers began to organize themselves (like in 9to5, a national professional women’s organization that was started in Boston), I realized that the labor movement could be an important place for me to be active and work. I’ve been teaching in college labor education programs ever since—about 30 years now.

When I was elected to the office of secretary-treasurer for the Oregon AFL-CIO office, it was the first time I’d gotten to try my hand at being a labor leader. I’d been helping prepare folks for leadership for years; I found out that doing it is not the same as teaching about it! To be a union organizer, you have to have a vision and be articulate in sharing it with the community and media. You have to have clear ideas about how unions should find solidarity with people involved in other big social issues: immigration reform, marriage equality, marijuana legalization. You have to take the risk of putting yourself out there. Women in the labor movement have really had to struggle for their rights. I had never taken the risk of making my ideas heard before—I was always more comfortable behind the scenes.

Are unions still important in 2014?

More than ever! The gap between rich and poor in our country is widening. On average, CEOs make 331 times what the average worker earns in a year! We have so many jobs that don’t pay enough to live on, much less to support a family, in this country, and others that are dangerous, or only part-time, or otherwise physically, monetarily, or psychologically demeaning—where women are sexually harassed and can’t protect themselves, where people are forced to work off the clock without being paid. Jobs where you’re treated as expendable. Workers in those jobs need unions.

The other thing is that unions support policies that help all workers: minimum wage laws, worker safety regulations, and so on. Unless unions are strong, we stand to lose all that, too. Unions often get involved with social justice and form alliances in the community. We’ve started reaching out to community organizations in a big way. Nationally, we’re working hard with allies who advocate for immigration reform; we’re calling for an end to mass incarceration, which impacts young black men more than anyone else; we’re working hard with our community allies to raise the minimum wage to $15 per hour—a real living wage.

Survival is the challenge! Unions represent less than 12 percent of the workforce now. Union leaders have to figure out how to help low-wage workers form unions for themselves. They need to realize that their fate is tied up with the fates of all those unorganized workers: young people, immigrants, and others who are exploited in our economy. But it’s tough. Unions are under attack, now as ever, by big business and political forces, because unions have succeeded in raising living standards for the working class in the U.S., which costs companies money they’d rather not spend on making sure people can live their lives. They’ve also been effective politically, helping politicians who are sympathetic to labor issues get into office.