The Importance of Music to Girls

You could do a lot worse than sharing a teenager’s taste in music. 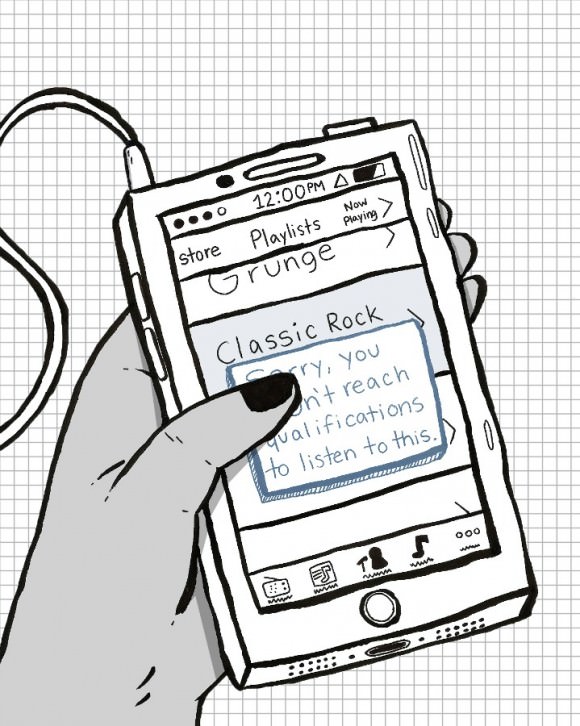 Earlier this year, in Belfast, Ireland, Miley Cyrus did a cover of the Smiths’ “There Is a Light That Never Goes Out”:

This performance was immediately all over my Facebook news feed. Friends of mine, and rock critics that I follow, were calling it “offensive” and “sacrilegious.” One commenter on Rolling Stone’s website summed up their reaction thusly: “She can be a cracked-out, attention-whoring clown all she wants. That does NOT entitle this brat to mess with other people’s music.”

A month earlier, Lorde was hand-picked by Dave Grohl and Krist Novoselic to join them in a rendition of “All Apologies” in honor of Nirvana’s induction into the Rock and Roll Hall of Fame (with Kim Gordon on bass!):

I thought this was a pretty badass tribute, but it seems I was in the minority. Christ Schulz’s reaction in the New Zealand Herald was typical: “Kurt would have hated that,” he opined. And it wasn’t just rockist old dudes who objected: Iggy Azalea apparently objected too, saying, “I think when you’re doing a tribute to someone that’s dead, generally it should be the person’s peer. Lorde is not Kurt Cobain’s peer. […] I just don’t think it’s appropriate.”

OK, what is going on here? Nirvana, in their heyday, were never known for their loyalty to the Church of Rock, that questionable institution made up of music industry people, critics, and fans who worship guitar-driven, mostly male bands for their apparent “purity,” while dismissing pop music as superficial, unimportant fluff. Kurt Cobain was just 18 when Nirvana formed and was an outspoken feminist—I’m sure he would have loved the idea of a 17-year-old girl covering his band’s poppiest hit. And Miley’s version of “There Is a Light” is arguably darker and mopier, even, than the Smiths’ (again, one of their poppiest-sounding songs).

I’m not saying that Miley and Lorde are being targeted for this kind of criticism for their gender. Last year, when One Direction released “One Way or Another (Teenage Kicks),” a combination Blondie/Undertones cover they recorded for charity, the Guardian’s Adam Boult was prompted to start a list of songs that “must never be covered.” Never mind that 1D’s medley got a seal of approval from Blondie’s Debbie Harry herself; Mr. Boult said it was an “abomination” that somehow “tarnished” the original versions. So it’s not about the gender of the artist doing the cover—it’s about the gender (and age) of their fans. Think about it: Young, poppy acts, have largely young, female fan bases. I believe the reason rockist dudes feel so dang uncomfortable watching these artists cover songs by bands they love is that it points out that they might have something in common with fans of Miley, Lorde, 1D, etc. They might actually have something in common with teenage girls. And what could be worse than that?

Here’s what I want to tell these people: You could do a lot worse than sharing a teenage girl’s taste in music. The pantheon of acts who couldn’t have gotten famous without the support of teenage girls includes a lot of people and bands you probably respect a lot: Michael Jackson. Elvis Presley. The fricking BEATLES. When Nirvana were around, most of their fans weren’t 50-year-old rock critics; they were kids.

Here is something your hero Kurt Cobain once wrote, with his own hands: “I like the comfort in knowing that women are the only future in rock and roll.” Now tell me he wouldn’t have “approved” of Lorde, Kim Gordon, St. Vincent, and Joan Jett covering his band’s songs.

The thing is, I get it. I understand what it feels like to love a band with your entire soul and then discover that a significant number of the people who feel the same way you do about them are people you have nothing else in common with. People you don’t even like. At this taste-crisis juncture, you have two choices: You can get angry, and distance yourself from those fans and everything they stand for; or you can realize that the people you thought you hated are not as different from you as you once thought, and you can feel a new space for them grow in your heart. The choice is yours!

Kurt Cobain loved pop music, and didn’t give a fuck if it was cool or not. […] I see it often in the comments section: Rockists, usually male, usually 30, 40-something. They’re passionate about music (which is fantastic), but scared, seemingly threatened by artists (female, young, or black) that challenge their pre-conceived, archaic rock homogeneity. It’s an attitude of fear and exclusivity, the kind that Kurt despised.”

This defensive barrier constructed around certain rock acts doesn’t do anybody any favors. Isn’t it actually great if a new generation of musical performers and music lovers connects with something in the back catalogs of Blondie, the Undertones, Nirvana, or the Smiths? Does it really matter how they got there? Whether it was a dusty vinyl LP ferreted out from the depths of one of the world’s last remaining brick-and-mortar indie music stores, or a One Direction cover, something introduced these new fans to this old but new-to-them music, and isn’t that cool, no matter what?

My first exposure to the Ramones, a band whose music provided the soundtrack to my teenage and young-adult years, was the teen soap The OC. I saw the band’s posters in Seth Cohen’s bedroom and read an interview with Mischa Barton where she raved about them, which led me to buy a “best of” anthology. That led me to seek out, find, and adore music by other punk bands, which created a rock-solid, foundational love in my heart.

My punk-music fandom is no less valid because I wasn’t alive to see them play at CBGBs in the ’80s. Music, whether it’s rock or pop or rap or nu-wave or dolewave or whatever, was meant to last for ages. All ages. If you love music as much as I do, let people like me discover it our own way. You would have wanted the same when you were young. ♦