A track premiere and a chat about how college can radicalize you, how poetry can bring people together, and how sometimes it’s good to examine the dark side.

How to Make a Pinafore Dress 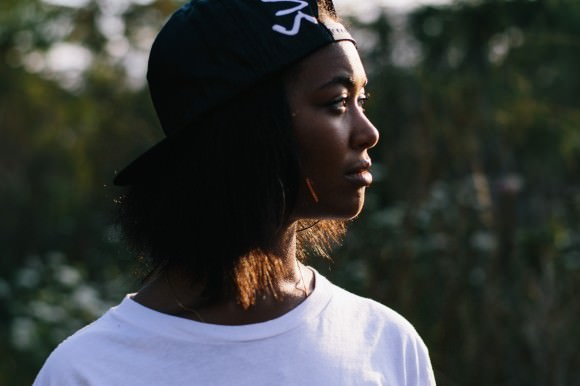 To record their self-titled debut LP, SOS (or Shadows on Stars) left their home of Portland and retreated into rural Oregon. There, Randa Leigh and Brian Vincent created an album of Randa’s haunting voice layered over Brian’s stuttering beats. It’s no surprise that their new single, “Gorgeous,” which we’re premiering here today, totally lives up to its name.

The band is currently in the middle of another relocation—this time to New York City. I called Randa this week to talk about her latest move and the journey that got them here. For more SOS, you can follow them on Twitter, Facebook, and Soundcloud, too!

NILINA MASON CAMPBELL: What drew you to New York City?

RANDA LEIGH: It’s just time for a change. Business is mostly all here, so it’d just make sense to not have to keep traveling back and forth. I’m originally from the East Coast—I grew up in Baltimore—so it’s more like home for me. I feel like there’s just a lot for me here generally—a lot more growth.

When was your last big growth spurt?

I did a lot of soul-searching in college. I went in as a business major—my whole thing was “I’m gonna be on Wall Street; I’m gonna take people’s money.” [Laughs] It was a Wolf of Wall Street mindset. Once I got in, I got into feminism and gender-identity politics and changed my major to women’s studies. I happened to take one women’s studies course, and it was life-changing. It wasn’t just the gender-studies part of it—it was what I learned about race relations, as well. Being a black woman in, at the time, a tiny, primarily Caucasian town—Corvallis, Oregon—I found that [the coursework] really resonated with me. I felt like I could apply a lot of the messages I was getting in my classes to my own life and relationships, but share them, too. I wanted to write; I wanted to sing; I wanted to do everything. I wanted to make changes in Portland, in Oregon, and perhaps nationally. I decided that [performing] was a more effective way for me to get out my message than being an accountant. That was a big period of growth for me, both spiritually and mentally. I became more of the person that I am today, and I feel like I grew up. I had space in college to actually become an adult and find out who I am.

How did and Brian Vincent meet?

We met in a poetry group in college. Brian was the president when I happened to join. At the time, he was was working on hip-hop stuff, and I was singing on hip-hop stuff in Portland, so it just made sense for us to work together. I came from a really gospel- and soul-based background, and he was coming from a hip-hop background, so throughout the years we worked on “Well, what’s our sound gonna be, then?”

Did being introduced in a poetry-centric setting help you figure out what you wanted your music to say?

Definitely. He was a sociology major and I was women’s studies, and it was the [heyday] of Def Poetry—all that slam poetry and all that. We started writing more about the real stuff. There was a lot going on in the world at that time, like the Darfur genocide and the beginning of the Iraq War. [Writing poems] was a way for us to feel comfortable about voicing what we thought about things. Poetry was a great segue into music. We were both already musicians on our own, but we weren’t writing music about anything that had any depth. We were writing that for our slam poetry and open mic performances. We started smooshing them together, basically, and wrote some music to match the messages.

Real relationships are one of the major things that we try to sing and write about: what people experience on a day-to-day basis, but not the fluffy cotton-candy parts, because that’s what gets talked about all the time. That can make people feel lonely about what they’re really experiencing. I want to shine a light on all this dark stuff that people try and hide about themselves, or about their experiences with others—all the interpersonal stuff. I feel that’s where the real healing happens. Like, “Let’s make some change.” ♦