Plus a Nicki interview, Kristen Wiig cuteness, how to speak cat &&& more! 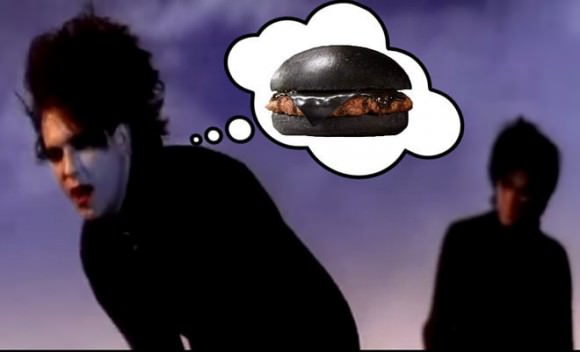 Collage of NariNari burger photo and the Cure’s music video for “Just Like Heaven” via Eater.

THIS IS A GOTH BURGER. The home of the goth burger is Burger King Japan, and apparently the bun, cheese, and sauce are made with charcoal and squid ink (natural ingredients!) to achieve its spookiness. If you were looking for something to eat while sitting in the dark and listening to Gene Loves Jezebel, HERE YOU GO. My goth soul has never been hungrier for a cheeseburger.
Dylan 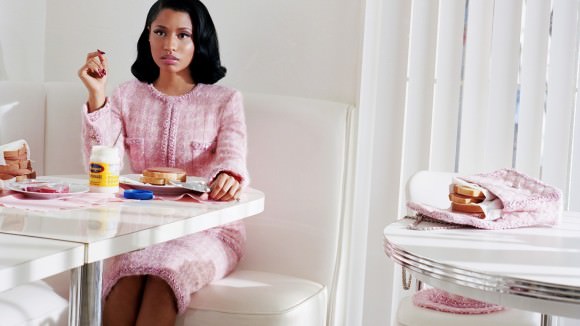 Nicki Minaj is the coverboss of Dazed & Confused’s latest issue. The interview is chock-full of crystal gems of inspiration:

The teenaged queen and Rookie pal Lorde graces the cover of Elle’s October issue. She gets real about her fame, Tumblr, and her intolerance for bullshit, but the best part is when she talks about her confidence as a young woman, and what that means for fans. My favorite quote from the gleaming bunch: “People know that if you talk down to me, I will roll my eyes or whatever.”

Maxim has hired Kate Lanphear as Editor-in-Chief. Lanphear is one of the most badass fashion editors around: She’s an alumna of Elle and T Magazine and her dark approach to style has made waves for years. Now she’ll be calling the shots for the “men’s lifestyle” brand, and hopefully she’ll change a thing or two about it—I might actually buy a copy when her first issue debuts in March 2015! 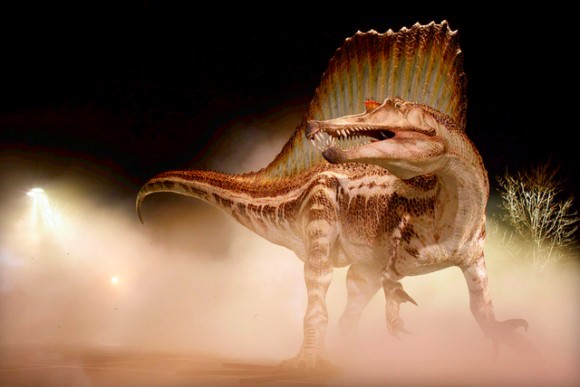 Artistic rendering of Spinosaurus aegyptiacus by Mike Hettwer via The Verge.

Paleontologists at University of Chicago have discovered that the world’s largest known predatory dinosaur, Spinosaurus aegyptiacus, was kind of half-duck, half-crocodile. That’s one of the strangest combinations I’ve ever heard, but it’s cool nonetheless.
Brodie

Anna Wintour starred in Vogue.com’s latest “73 Questions,” the lightning-round interview series where the host, Joe Sabia, barrels into someone’s zone and asks them super simple questions that often lead to intimate answers. In this episode, Anna refers to Brooklyn as “the new Silicon Valley,” has a hilarious conversation with the model Karlie Kloss, and tells a Vogue staffer her favorite thing about her job is “the people” as strides right by her. Even more amazing: The Editor-in-Chief of Vogue loves watching Homeland as much as I do. Chant with me: “One of us, one of us!”

12 years ago, a book called Live From New York: An Uncensored History of Saturday Night Live came out, and reading it brought me so much joy. As a fan of the show, hearing behind-the-scenes stories about SNL from Cheri Oteri, Chevy Chase, Tina Fey, and Lorne Michaels himself was a gift from the heavens. You can imagine my delight when Vulture published an excerpt of a forthcoming expanded edition of Live From New York. The updated version of the book will include new coverage of the past 10 years at Studio 8H, and this story about Kristen Wiig’s emotional final moments on the show is a great introduction.

Remember that time you sobbed while watching the entire cast, plus past members and Lorne himself, say farewell to the incredible comedian as Mick Jagger and Arcade Fire sang “She’s a Rainbow”? Turns out you weren’t alone, according to this quote from Wiig:

I know that Lorne knew I was leaving just from being around the show; we can’t really keep any secrets around there…But of course I knew that I still had to sit down with him and talk. I believe we were at dinner and I just said, “Well, are we going to talk about this?” And it was really hard and emotional. The last show of my first season I went up to Lorne and just thanked him; I was just overwhelmed from the year and I got a little choked up, and then when I left, I got really choked up. So I started and ended my experience there crying in front of Lorne.

“The Things We Suffer,” an essay by my close friend Judnick Mayard, is an astonishing and wildly heartbreaking personal essay about being abused by her mother—both as a child, and even as an adult. As my friend, I know Judnick to be a straightforward, frank person, but the ferocity with which she bears her soul—and the courage along with it—still moved me to tears:

I don’t have enough fingers and toes to count how many times I came home to this speech: “I hate you. I wish you would walk into traffic and get hit by a truck. Why don’t you kill yourself? You ruin everyone’s life and can’t you tell they wish you weren’t around anymore.” The cause was always the same: Either I had lost one of my gloves or my hat or a scarf or I was asking my mother for some sort affection or attention. Whenever I said “I love you” her favorite response was “I don’t love you at all.”

It will rip your heart to shreds, but it’s a testament to Judnick’s loving character that she turns this story into a way to reach out to other victims of parental abuse and offer reassurance that no one is alone.

“Higher,” is the first video from Jane Jupiter, the sophisticated, futuristic alter-ego of one of my favorite rappers, Kid Sister. I CAN’T GET ENOUGH OF THIS, PEOPLE. I get chills when she sings the harmonies in the chorus…while doing body-rolls in a disco-ball catsuit! How could this be better?! This song is from Kid Sister/Jane Jupiter’s first release in three years, Dusk2Dawn, and I highly recommend you listen to the whole thing.
Caitlin D.

Few things are as important as being able to communicate with cats, so praise Gaia for this study guide on the phonetic expression of kitties, as excerpted from a 1944 journal of comparative psychology.
Brittany

A recording of isolated guitar and vocal tracks from a four-year-old Hole performance has been making the rounds, prompting jokes and accusations about Courtney Love’s lack of talent. Enter the writer/superwoman Judy Berman, who discredits the sexism of criticizing isolated parts of Courtney Love’s live music (as well as any other artist’s). Berman spoke with an audio engineer, who explained how listening to only the vocals and guitar parts has little bearing on the power of a live performance. Berman also goes in on the misogyny of the repeated jokes at Love’s expense—here’s the final TRUTH as laid out by Berman:

Imagine seeing similar snark applied to an isolated vocal track from a live Bob Dylan show, which would surely be all bluster and wheeze. If a writer were stupid enough to argue that Johnny Rotten was a fraud because he lacked technical skills, punk fans would be quick to point out that his lyrics and attitude and delivery are what’s important; it’s just the same for Love. Her particular genius is in her embodiment of a certain chaotic female experience, and the potency with which she articulates it. 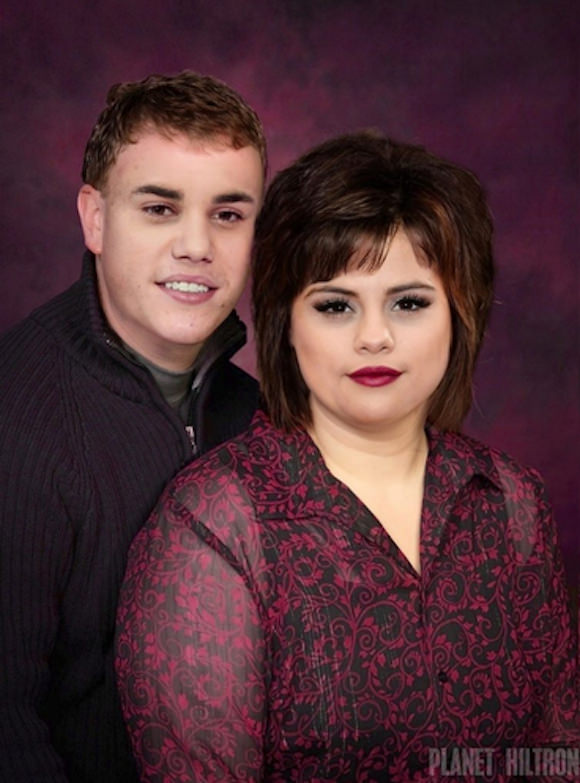 Image by Danny Evans via The Daily Beast.

The artist Planet Hiltron, aka Danny Evans, makes artistic renderings of how he pictures famous people would look if they had entirely different lives. Like, imagine if Beyoncé had grown up to be an accountant in Ohio without a team of stylists and trainers (OK, she’d continue to look like an otherworldly beacon of light, but still). This week, Planet Hiltron released a fresh batch of celebrity-makeunder Photoshops, including one of Justin Bieber and Selena Gomez that I found particularly gripping. ♦