A video premiere, album, and conversation all about getting over a painful breakup. 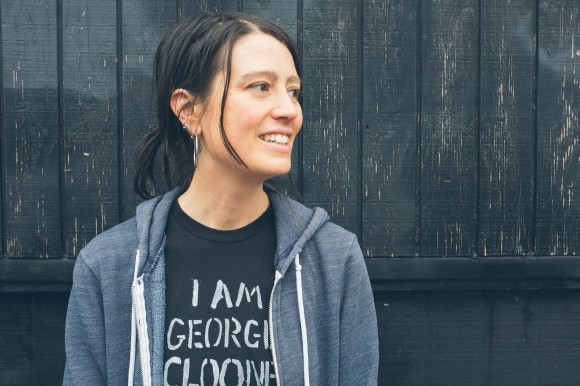 In the wake a painful breakup, some people go on dating rampages or rom-com/ice cream/self-pity binges, some wander around aimlessly, sighing dramatically and flinging themselves upon every available bed/couch/divan/chaise lounge, while others spend every waking hour compulsively stalking their exes on Facebook. Jenn Ghetto chose to write the best album of her 19-year career.

Cool Choices by S (Jenn’s nom de musique) is full of vulnerable pop songs that will make you want to rip your heart out of your chest so you will never have to experience love again. Take this song, “Losers,” a haunting piano-heavy ballad about accepting where you are emotionally at the moment, whose video we’re premiering right now:

As a whole, the album’s 12 songs portray every possible feeling that comes from being emotionally destroyed by someone you loved.

When I talked to Jenn recently, I learned that writing music wasn’t her only heart-healing strategy (Survivor and Lana Del Rey helped, too).

MEGAN SELING: Is songwriting generally where your head goes when life gets shitty?

JENN GHETTO: It’s definitely where I retreat to. When something big like that [a breakup] is happening, it’s like, “Well, how do I live my life now? I’m just going to go play piano for a while, because I can’t deal with it.” I also watched a lot of Survivor. I was like, “Those people are really having a hard time right now.”

Are the songs autobiographical?

Definitely. The record follows me through the breakup and what happens after a breakup—how you go a little crazy, then you meet somebody [new] and that doesn’t go very well either. It’s about going through all those things until, a long time later, it seems OK.

Was it hard to be that vulnerable in your work?

I wouldn’t say it was easy. But I’ve got to put myself out there if this is the kind of art I’m trying to make. I could definitely see somebody listening to it and not knowing what to do with it—not knowing how to handle something so honest. I’ve had people tell me that they can’t listen to the record. They’re like, “I can’t listen to your records at all. They’re too much. I have had to leave the room while you’re playing.”

Do you take that as a compliment?

I do! It’s really bringing out some feelings for everybody. I think it’s cool I’m getting a reaction. And I’m still getting messages from people saying that it resonates with them in some way. It’s really helpful that people relate.

What kind of music do you like to listen to when you’re feeling sad?

It’s kind of a range. Last summer I was listening to a lot of Lana Del Rey, while lying on my floor. [Laughs] There’s just something about how that whole album was produced. She really sings it. And sometimes words are too sad, so there was definitely a period when I listening to nothing contemporary. It was all minimal ’80s [stuff], anything that sounded like Kraftwerk. You just listen to a lot of robotic music, because robots can’t feel. I really enjoy pop music, but it’s usually all about breaking up or crushing on someone, and sometimes it’s like, “No. Not today, Katy Perry. Not today.” ♦

Megan Seling is a writer and baker currently living in Nashville (with a big chunk of her heart still living in Seattle). She yells about music, sugar, and hockey on Twitter.