Nine young artists talk about the pleasures and perils of turning your passion into a job. 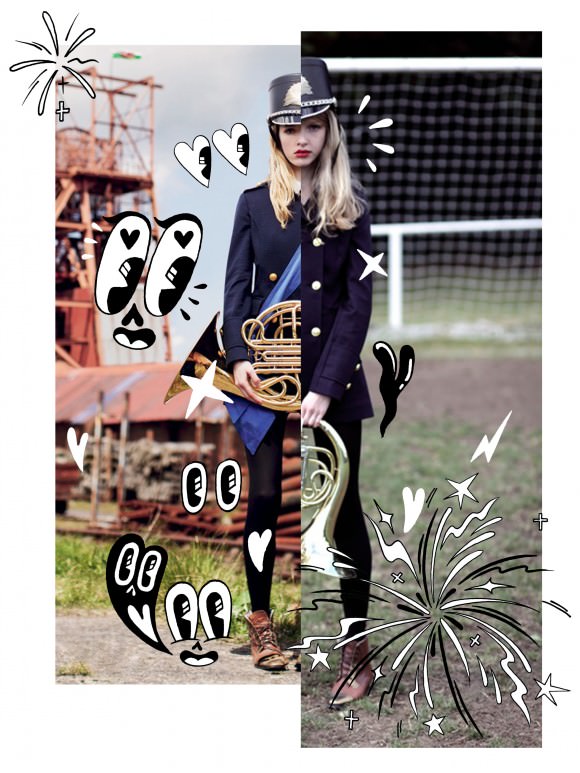 Ever since I decided to be a professional writer, I’ve been thinking a lot about the compromises one has to accept in order to make a living from their art. I can’t think of anyone who spends more time mapping and navigating the middle ground between art and commerce than visual artists who do commercial work to support themselves. So I got together online with some of Rookie’s finest illustrators, photographers, and graphic designers to talk about the intersection of personal and commercial design and artwork, getting paid to do what you love, and staying true to your vision. —Monika

MONIKA: Hi, guys! Thanks to all of you for participating. First question: How did you begin doing commercial design, photography, or illustration work? I know many of you have personal blogs or Tumblrs–did your first clients find you, or did you apply for jobs?

SUZY: I was in college, double-majoring in illustration and politics at the time. My program had no crossover between those two disciplines, so I had to make it happen on my own. I was also a media intern at an anti-rape organization, and I saw that they weren’t doing a great job engaging with the populations they were trying to serve (college students). They needed something to grab their attention. So I started making comics an videos for them, and those got the attention of other nonprofits. My Rookie gig, however, I got just by posting my comics on Tumblr.

ELEANOR: I started by putting my work on Flickr when I was 12. It started off as a personal hobby and passion. By the time I was 14, a couple of DIY zines had featured my work. That’s when I saw that the magazine Dazed & Confused had made a Flickr group where readers could submit their own [photography], and the magazine would pick its favorite ones and interview those people on the site. I submitted my work and was chosen as the first Flickr Showcase on Dazed Digital! After that I really started to seek opportunities out. I would submit my work to competitions and email anyone and everyone that I wanted to work with or meet.

Now, I don’t have to reach out as much. I get so many emails from people offering me work opportunities, and I have no idea how they found me. I think if you want to get your work noticed, you’re making things 3,456,789 times harder for yourself if you refuse to put your work online, because everybody else does it. Also, the encouragement and the sense of community you get from sharing your work with other artists on places like Flickr and Tumblr really helps.

A lot of my friends feel like putting your work online is SELLING YOUR SOUL, but I don’t agree. If putting your work online and getting likes and comments is the sole reason you make the work in the first place…THAT’S selling your soul. If you want your work to say something that other people will find interesting, the internet is the most democratic place to connect with people and get discovered.

Don’t just start by putting up your own online portfolio and waiting for people to discover it. How will anyone to find it? The best way to start, in my opinion, is through social media sites, because they provide you with an instant community, and you get to all move forward together. Online communities helped me the most when I was starting out.

BETH: Elle, we are so similar! I started from zero with a Tumblr and Flickr, not having any idea that people would care, just for my own personal documentation and collection, and because, for some reason, I felt compelled to publish and share my work. I also started joining Flickr groups, and I swear that made the biggest difference. I got a LOT of opportunities from that, including an interview on Dazed Digital. And Elle, I remember you from Flickr back in the day!

I also have friends who think it’s uncool to have such a prominent internet presence, but the joke’s on them! I would be nowhere if I hadn’t forced people to notice my stuff via those groups and blogs (aka shameless self-promotion). Then it’s like a domino effect: Once you’re on one popular blog, another one sees your work, then art directors see your work, then editors, etc., and the next thing I knew, I was doing magazine covers. Four years later, [commercial illustration] is how I make a living!

SANDY: I got a magazine spread when I was just starting because the photo editor of Popular Photography uses Flickr and saw my photo. I still get a lot of jobs through Flickr, like book covers and stuff that pays a lot, and Getty Images, which has steadily been contributing to my income for about four years now.

ESME: When I decided for real that I wanted this to be like MY CAREER, I just put everything I’d ever drawn onto Tumblr and hit up everyone I wanted to work for, just being like , “Hey I wanna draw for you, are you down?” For the most part, people just said yes! Definitely use your friends too—if you tell everyone you’re “an artist,” people will start asking you to make a flier or a record cover, and then it snowballs from there.

MONIKA: How are commercial and personal work different for you? Are there themes you’ve been pushed to explore because of certain jobs or commissions? How has that helped you grow or limited you?

EMMA D: Well, I was never very interested in fashion, but then, in the past year, I started working on a few fashion-related assignments, and of course that has had an impact on my personal work. On the bright side, I’ve developed a better eye for fashion and started paying more attention to it and learned how to link it to other fields of art. But that work also forced me to use the computer (I like analog media the best), and I started involuntarily making my personal work too pretty and too Photoshop-polished, which I don’t like.

BETH: I’ve also been forced to teach myself Photoshop. I never make things exclusively on the computer, but I have to use it to tweak things for magazines and albums and stuff.

CYNTHIA: The jobs that made me push myself to try something new are typically the really small commissions. That has been really interesting, which is why I keep doing those kinds of jobs. But with bigger projects, where there is more work due in a shorter amount of time, and more money being paid in the end, I’ve found myself turning to the computer much more. I’m trying to get out of that habit now, because I’m really feeling it affect my personal work in a negative way.

SANDY: Most of the time people hire you because they like your personal work, and most of the commercial jobs I’ve had have been pretty lax, asking me to keep my aesthetic in the photos. This can be hard if the goal is selling clothes, because I am a candid street photographer. But I think it’s cool to see how you can adjust your vision to a commercial environment while retaining your voice. It can be hard and it can feel soul-sucking, but if you’re committed to your work, you can find a happy medium where the client is happy and you don’t hate the work.

MONIKA: Does the soul-sucking part ever overshadow the rest of it, to where you wish you hadn’t taken on a particular project? How do you deal with that?

SANDY: That usually happens when I am doing a friend or family member a favor that I feel bad saying no to, even if it’s something I would turn down coming from anyone else. I deal just by trucking through it, smiling even when it sucks. If I’ve committed to something, I follow through. I think of it as a learning experience, to teach me which projects to turn down in the future.

CYNTHIA: The worst assignments I’ve ever had have come from family!