Literally the Best Thing Ever: The Food Network

Where else can buttercream frosting induce blood, sweat, and tears?

Why Can't I Be You: Rebecca Solnit 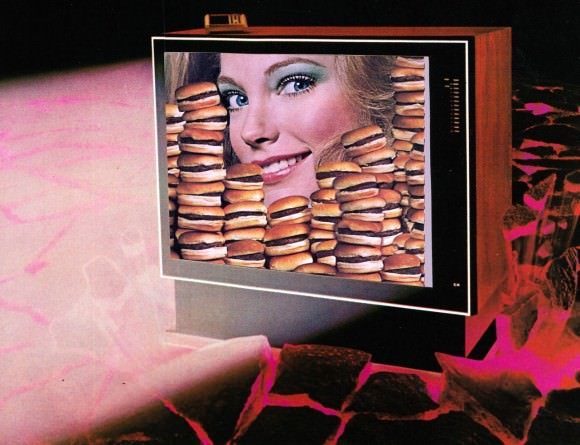 My grandma used to tell me that if color TV had been around when she a teenager, she wouldn’t have gotten married at 17 and proceeded to have seven kids. Now, every time I, a childless, unwed 20-year-old girl, log on to to Hulu and have my pick of thousands of episodes of hundreds of shows (in color!), I like to think I am honoring her legacy. My love for television runs deep and pure. It’s by far my favorite medium, above film and books. And of all the glorious television available to me today, the true apple of my eye is nonfiction programming on cable.

There’s nothing more relaxing to me than kicking back and watching a bride shed tears as she shops for her wedding gown on TLC. I love to unwind with a couple of bumbling newlyweds as they choose a first condo with 1.5 bathrooms on HGTV, or watch, slack-jawed, as the latest bunch of Real Housewives duke it out on Bravo. But really, these channels are mere distractions for when there’s nothing new for me on the Food Network.

My family didn’t have cable until I was about 10, which means I spent the first decade of my life harboring an intense longing for it. Being the socially adept and outdoorsy kind of kid that I was, I spent my Saturday afternoons on the couch, watching low budget, no-nonsense cooking shows on the local public-access station. These shows weren’t very glamorous, but they taught me things that are still helpful, like how to avoid overcooking noodles and how to tell if a melon is overripe. So on the fateful day that our cable box was installed, I flipped through the channels and then stopped short at the Food Network. And then I stayed there, for years. The Food Network has everything I’ve always loved about lo-budget cooking shows, but better: There are elaborately beautiful sets in the place of messy, badly lit kitchens, and instead of just hosts, there are “stars.”

Forget pop stars—my celebrities are the Food Network stars, human beings who can make you desperate to eat something you can’t even smell, much less taste. I did not even know what mascarpone was before Ina Garten informed me that it is a sweet, creamy Italian cheese often used in place of cream cheese, but I as soon as she had, I knew I loved it. Meanwhile, I can’t even explain to a friend why pizza is good.

When I first started watching, the network mostly featured instructional cooking shows and some short documentaries where bubbly hosts would travel around the country looking for, like, the best funnel cake in America. They still have these kinds of shows, the most popular being Diners, Drive-Ins and Dives with Guy Fieri. Guy got the gig after winning the reality show The Next Food Network Star in 2006. I think he is the offspring of Ed Hardy and a bottle of barbecue sauce. But as much as I want to dislike him, I can’t help feeling inspired by the passion he displays while seeking out and celebrating America’s greatest grease wielders and deep-frying connoisseurs.

You can fulfill all of your deepest entertainment desires in a single day of watching the Food Network. They serve up some of the most multifaceted viewing experiences that money can buy! Like, if for some reason I want to experience the adrenaline rush of the final moments of the Super Bowl, but would also like to admire the beauty and craftsmanship of pastry art, I can kill two birds with one stone with Cupcake Wars.

Only the Food Network can take me to an alternate world where something as innocent as buttercream frosting can induce blood, sweat, and tears.

Another favorite of mine is Chopped, a cutthroat reality show on which chefs are required to make dishes incorporating three mystery ingredients in 20 minutes. That probably doesn’t sound too wild, but YOU trying making a entrée including eel, Fruit Loops, baked beans, and tortellini! (Sidenote: A very fun game to play with your friends when you’re waiting in line is Hypothetical Chopped, where you name three hypothetical ingredients and they tell you what they’d make with them.)

But it’s still the classic half-hour cooking tutorials that really have my heart. Each one of these no-nonsense programs is one part instructional, one part comforting, and one part fun facts. Any time I’m feeling anxious, all I have to do to calm myself is watch this clip of Ina Garten teaching me how to roast a chicken.

When I was in fourth grade, I persuaded my parents to take me to a daylong Food Network convention. I met Bobby Flay and won a T-shirt playing a live version of Unwrapped with Marc Summers. Now, I don’t want to get ahead of myself, but it may have been the best day of my life. ♦