They’re not so much about the exercise. 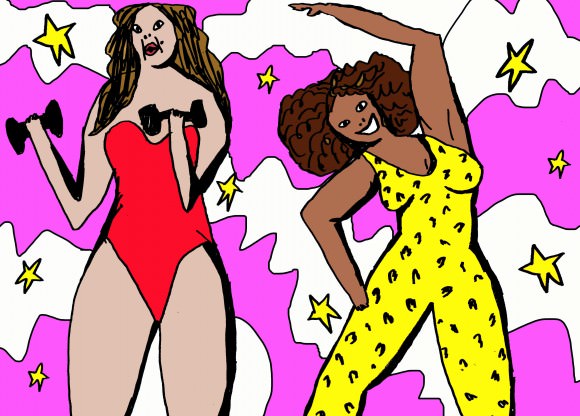 It seems like every type of celebrity has some kind of side hustle, whether for money-making purposes or to convince us, the fans, that they are complete and well-rounded artistes: the models who act, the actors who play in bands, the rock stars who own restaurants, the celebrity chefs who have cameos in movies. My favorite kind of side hustle ever, though, is the celebrity workout video, which tends to be made by everyone: musicians, models, actors, dancers, and Kim Kardashian. Sometimes it seems like the only type of famous person who doesn’t have a workout video is the author (probably because most authors are not well known enough that someone would pay them to do a workout video, although I’m still holding out hope for J.K. Rowling’s Hot Hogwarts Abs).

Since the ’90s, there’s been a special place in my heart for fitness videos by famous people. I’ve mostly moved on to more “professional” workout scenarios—i.e., the gym—but the allure of the celebrity workout video always draws me back.

Cindy Crawford: Shape Your Body Workout was the first celebrity workout video I ever owned. I begged my mom for it when it was released in 1992 and finally received it in clunky VHS format for Christmas. Crawford was at the height of her fame as a supermodel when Shape Your Body Workout came out. In the late ’80s and early ’90s, supermodels were generally athletic and strong. Crawford was the most athletic and strong of all, so her making a workout video was a strategic and logical move. She was super-cool at the time, representative of ’90s New York glamour, and was definitely the most famous person to release a workout video since Jane Fonda aerobics-ised her way through the 1980s.

At the time, Entertainment Weekly said the Shape Your Body Workout’s “hip music and graphics…lend a contemporary edge seldom seen in exercise videos.” Which was true! Much of the workout was shot on a rooftop with Manhattan in the distance, and it was mostly soundtracked by Primal Scream. But the EW review also went on to say, “You won’t get much detailed instruction on body positioning from this tape, however, so you’d better be exercise-savvy to start.”

That, my friends, is an understatement. I like to think I’m pretty exercise-savvy, and when I recently re-tried this video, it was so non-conducive to a workout that I started cracking up midway through my leg lifts. First of all, Crawford has terrible form. She arches her back wildly, slouches, over-extends her lunges, and strikes various other poor-postured poses that can cause serious injuries and that would no doubt give any personal trainer or gym teacher heart palpitations. She also races through the exercises—not even in a speedy, super-aerobic workout kind of way, but in the way a person who REALLY hates exercising is just trying to make it through the repetitions so she can shower and do something more exciting, like go to a club. Which, Cindy, I feel you, girl.

In some cases, a celebrity workout video is actually really good. Mel B.: Totally Fit, released by Mel B. (aka Scary Spice) in 2009, is awesome because it is completely motivational and the cardio and strength moves are safe yet extremely challenging (plus there is an interlude in her kitchen where she talks about eating for health—when else but while watching this workout video would you get an inside look into Mel B.’s kitchen?!).

Other times, I appreciate a celebrity workout video because its exercises are vintage and it’s fun to look at old-time-y fashion and learn old-school dance moves. That’s why I love Paula Abdul’s Get Up and Dance!, released by the singer/dancer in 1994: You get to watch (and join!) commoners attempting ’90s dance steps like “The George Jetson” while wearing denim vests and jaunty hats. “Some of these people are my neighbors,” Paula intones, underscoring her point that anyone—even you!—can do this dance workout.

But in most cases, I love celebrity workout videos because they tend to be so absurd. The thing many of us who love celebrity workout videos understand is that the workouts are usually totally secondary to the act of watching a celebrity execute a pretty common activity. The idea that Celebrities: They’re just like us! is never more apparent than when you’re watching, say, Kim Kardashian leading viewers at home in a round of step aerobics while trying to catch her breath. And—is that a droplet of sweat?! In her 2009 workout video series Fit in Your Jeans by Friday, she extols the virtues of lunges in order to look good when one goes to “parties and events.” It’s an absurd concept for a good workout: The idea that we shall “fit in our jeans” by doing this workout for only five days is pretty misguided/unfounded, despite the fact that she teams up with fitness gurus like Jennifer Galardi (who, by the way, makes a lot of good dance workout videos). Any health professional will tell you that it takes time, plus exercise and a balanced diet, to change your body. I will tell you that your body is perfect exactly as it is.

Some celebrity workout videos are absurd in a different way, though. Case in point: the nugget of perfection that is 1992’s CherFitness: A New Attitude hosted by goddess of goddesses, CHER. Well… Cher doesn’t really host it, trainer Keli Roberts does, and a lot of it is just watching Cher workout in suspenders while performing the occasional nonplused voiceover: “Crunches, UGH! They’re the toughest, but they work.”

Also, as is the case with basically every celebrity workout video, Cher’s hair and makeup is complete perfection the entire time, belying the idea that anyone is actually putting in CONTINUOUS HARD WORK like you, the worker-outer, may be. Who doesn’t have someone to do hair and makeup in between reps, right?

And that touches on probably the deepest reason I love a good celebrity workout video: They are one of the clearest ways to realize that so much of what we see on red carpets and Instagram is not real—that there are always glam-teams five inches away from celebrities, ready to fix any smudges or fly-aways. Aspiring to that “perfection” is even more absurd than Paula Abdul making us dance to “YMCA,” as she does in Get Up and Dance). Even though the premise by which many celebrity workouts are sold is false and, frankly, creepy—Do this workout, get my exact body, or even Do this workout, turn into me—there is some value in watching or doing them. They’re often so unreal that they make me feel better about myself, imbuing confidence in the fact that I actually break a sweat (in public gyms or, to the probable chagrin of celebrity hair and makeup teams, in clubs!). Also: They are hilarious. ♦