For those who like their colors bright and their skirts real short.

I think my favorite place and time ever, in terms of fashion, is Swinging Sixties London. Although I’d kill to hang out in a mall food court with ’80s Valley Girls or parade around in bell-sleeved lace dresses during the ’70s, I’d rather program my time-traveling DeLorean to take me to mod-era Britain in 1966 for a shopping spree at Mary Quant’s store, Bazaar, on King’s Road. I’m obsessed with bright color combos and mod-style minidresses, both of which were popularized by Mary Quant. 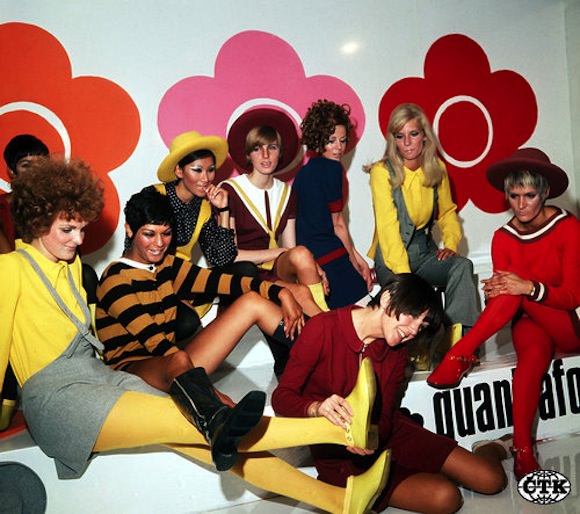 The London-born designer became interested in fashion as a young girl, when she used to cut up bedspreads to make her own clothes. In 1950, she studied art at Goldsmiths, University of London, where she showed off her knack for dressing ahead of her time. While everyone else was looking unkempt and bohemian, Mary wore wide belts over peg-top skirts, tight sweaters, fishnets or knee socks, and polka-dotted scarves tied around her neck like a cowboy. She met her husband, Alexander, at the Goldsmiths Christmas costume ball. He was dressed as Oscar Wilde; she appeared on a float, wearing only mesh tights and strategically placed balloons. (Is that my Halloween costume this year? I think so.)

After graduation, Mary became an assistant to a luxury milliner, or hat maker. Mary loved designing hats, but didn’t like earning only $3 for a hat that took three days to make and sold for $40. She decided to design her own clothing. 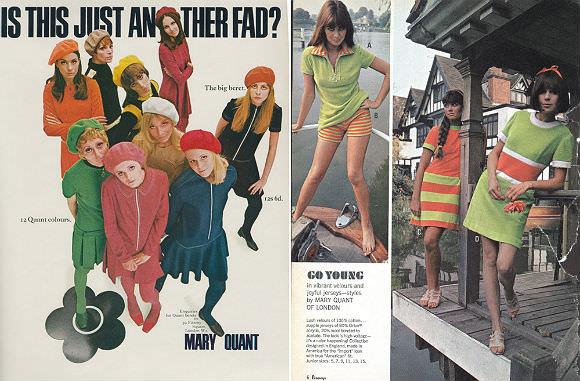 In 1955, at the age of 21, she opened Bazaar, her first store, while her husband managed a restaurant, Alexander’s, in the basement. Mary didn’t care too much about making a bunch of scrilla—she wanted to create fashionable, affordable clothes for women. She said, “Snobbery has gone out of fashion, and in our shops you will find duchesses jostling with typists to buy the same dresses.”

She got to work deconstructing dress patterns and refashioning them with higher hemlines and Peter Pan collars. Mary was the first to popularize miniskirts in London. She even gave them their name, “the Mini,” after her favorite car, the Mini Cooper. At Bazaar, girls asked for their dresses to be cut even higher than the already-shortened hemlines Quant had designed. Just after World War II, fashionable young people were shedding conservative ideals, and they wanted their clothes to reflect it, but other fashion outlets weren’t concerned with catering to young buyers. So while teenagers were discovering music, going out to clubs, and taking part in the new sexual revolution, they were doing it all in Mary’s clothes. 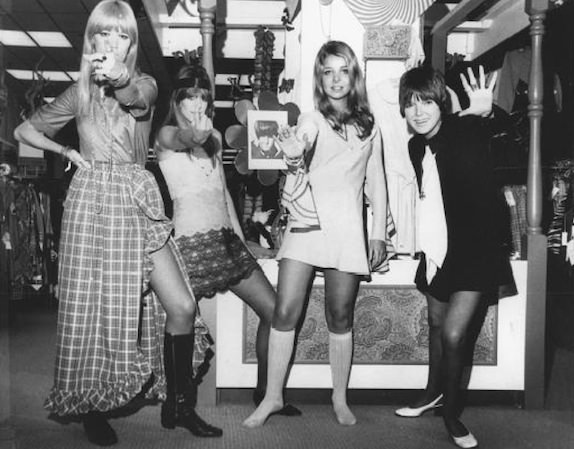 A lot of (mostly older) people called Mary’s clothes vulgar. She wasn’t offended; she was explicitly designing for people who were more open and liberal about sex. “Am I the only woman who has ever wanted to go to bed with a man in the afternoon?” she once asked. “Any law-abiding female, it used to be thought, waits until dark. Well, there are lots of girls who don’t want to wait. Mini-clothes are symbolic of them.” 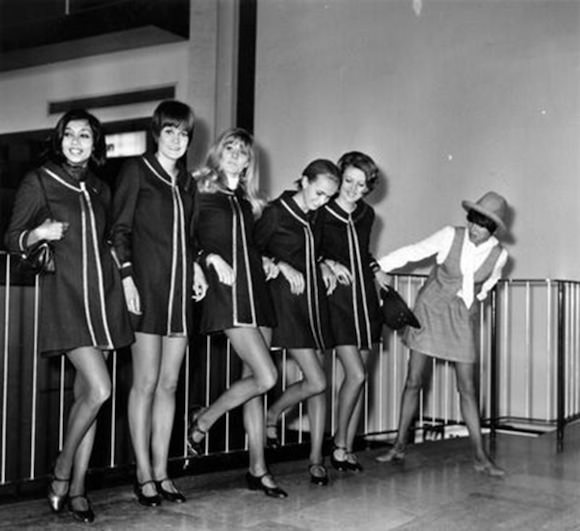 Both Bazaar and Alexander’s were hugely successful. Grace Kelly dined at the restaurant, and some of the world’s coolest actors and musicians, like Audrey Hepburn and the Rolling Stones, shopped at Bazaar. Mary became friends with the hairstylist Vidal Sassoon, who cut her hair into his famous five-point bob, and dined with Margaret Thatcher and Brigitte Bardot. She wasn’t shy about letting the public know that she liked styling her pubes into a green heart shape, and John Lennon, whom she was also tight buds with, sometimes sent her sketches for inspiration for her next pubic hairstyle. (These sketches have sadly never been made public.) A waiter once served her a heart-shaped steak as a wink to her infamous bush.

Mary was a phenomenon, but she didn’t rest on her laurels. When she realized that colorful, patterned tights weren’t available outside of theater costume departments, she persuaded their manufacturers to make some for her to sell at Bazaar, as they went so well with her minidresses. She also invented hotpants and was the first to use PVC in clothing. One of her most popular items was a white plastic Peter Pan collar that you could add to any plain sweater or dress. She predicted and created detachable collars 50 years before we all started wearing them! 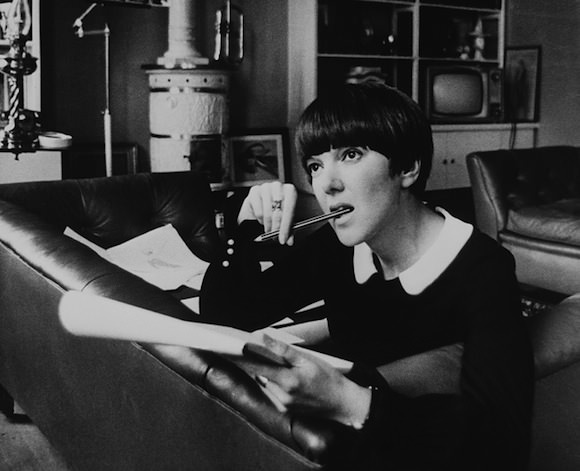 In 1966, Mary created a makeup line inspired by the art-supply crayons she mixed to make her own makeup. Part of it was what she called a “paintbox,” which held lots of different colors in one package—what we now call a makeup palette. She is also credited with the invention of waterproof mascara! (Unfortunately, the line did not include green pube dye.) 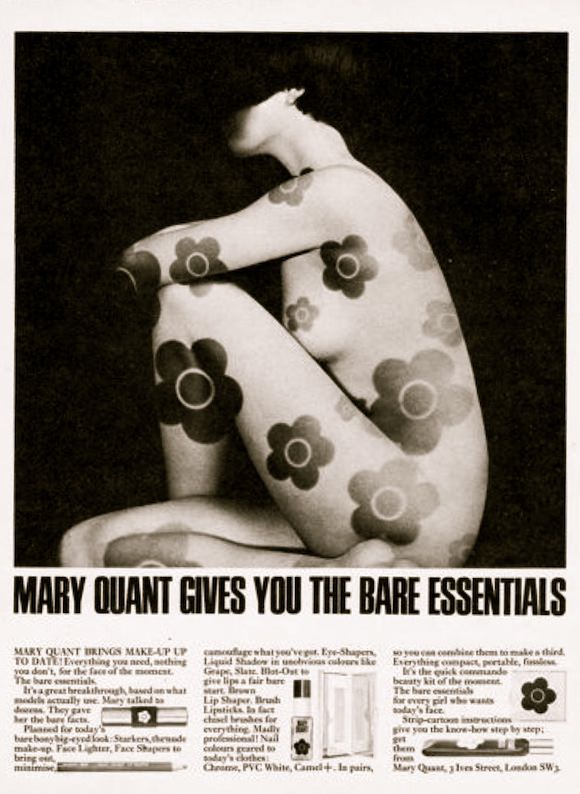 There’s no argument that Mary Quant is one of the most important figures in fashion history. She sold her business in 2000 and now spends her days out of the spotlight, but her many inventions in the fashion and beauty industries are still being used decades later. She also showed the rest of the players in the game the value of paying attention to what young people wanted and creating products just for them. She’ll forever be my hero, and I live by her statement “Good taste is death, vulgarity is life.” ♦