We stream the debut album and talk about how self-doubt is a waste of energy. 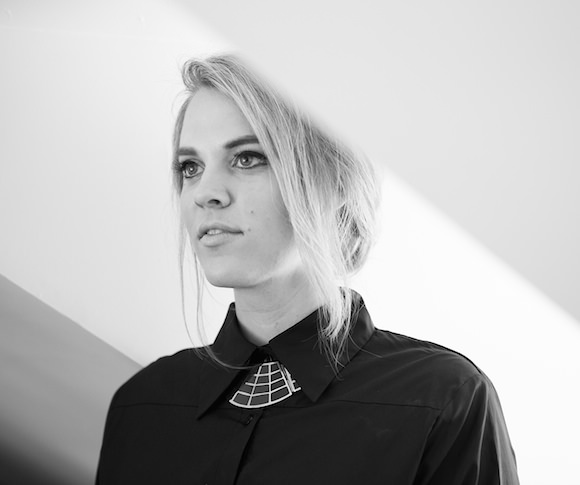 Listening to Tremendous Hem by Kind Cousin, the solo project of songwriter Allison Bohl DeHart, seems like the proper thing to do as fall approaches. Like the season, this debut album (released this week by MA’AM Records) has a certain chill, but there’s something comforting and cozy about it, too. Bohl DeHart’s enchanting vocals guide the listener through intimate narratives and graaaaand auditory landscapes, and we are excited to give you a first listen to the whole shebang right here:

I recently talked to the Lafayette, Louisiana, resident by phone about what studying film has meant to her songwriting, why she’s attracted to the acoustics of chapels, and the reasons YOU should start playing music with your friends.

DYLAN: I really loved the contrasts on this album. Listening to songs like “Citrus Tree” and “Bridges,” it sounds like it’s just you, and you’re right here, super close—like you’re whispering something one-on-one. Then on tracks like “Do You Care,” there’s this bombastic orchestration and epic, pounding percussion, but the effect is equally intimate and personal. I’m curious about what the recording process was like. Did you have much help or was it 100 percent you?

ALLISON BOHL DEHART: I struggled with this at first. Yes, Kind Cousin is my solo project, but I never wanted it to be the stereotypical solo project—like just me and a guitar. I wanted it to be more dynamic. I was afraid of not having a lot of time to play with an entire band, but I definitely wanted to collaborate. As far as recording goes, it was me and my husband—he’s a drummer who plays with Brass Bed and some other bands—plus a sound engineer, a woman who played some harmonies, and someone else who played keyboards. It was a collaboration that resulted from a mixture of people, but that had a very simple start.

The recording process started with me writing, which I did a lot of without instrumentation. I wrote melodies and then harmonies for the melodies. Once I sat with those for a while, I started to hear how [certain] production choices could make parts more dynamic. I am really interested in what you described—the drawing-you-in with something intimate, then the punching-you-in-the-face with something so epic that it has to move you. The possibility of that interplay is what I love about music. Phil Spector’s Wall of Sound, the way that he recorded, is a huge influence on me musically, so I wanted to do the album in a place that was not a typical sealed-off studio space. We tried a lot of places in and around Lafayette to find one that could be inspiring, with its own vibe and character that would be present in the recording, and also an escape for us to make the record. One of my friends happens to have an old chapel in St. Martinville, Louisiana, that he turned into a loft-studio. We ended up renting it out for a week. We stayed there, woke up early, played music—it was a very healthy, happy, reverent experience. The church itself has an amazing sound. We recorded [the whole album] there.

Tell me about Lafayette and its relationship to your songwriting.

This area is known for Cajun and Zydeco music. As far as what I play, there’s not much connection to that. But it’s a very inspiring place to go out and see music. I’ve always been a fan of indie rock, and that’s where I’ve gravitated musically. Here, with this regional music, it’s not so much about watching the bands—it’s about the band playing and you dancing. There’s a lot of partner dancing, so instead of simply watching a band, you go to interact. It’s this beautiful call and response between the performers and the audience. They play very long songs that are groove-based, which is very different from what I’m going for, but at the same time it reminds me why I love music.

Does Lafayette have an artistic community or music scene that you feel like you belong to or are inspired by?

I think that with every generation that grew up with the internet, you have the local things around you that you’re aware of and inspired by, plus the internet by which you have access to every type of music from every continent, ever. Here, I would say there is a small but tight-knit scene. Bands like Givers are known internationally. There’s a recording group called Cloudheavy Recording Collective, and a group of people even younger than us who have gotten together to create their own scene. We’re also starting our own label called MA’AM Records, with the idea that starting it will help us become more productive and more prolific and push ourselves.

I also do film and graphic design as my job, and a lot of people ask, “Why don’t you move to New York or Los Angeles?” For me, that’s never been a concern. I’ve never not had work, so I haven’t had to think about leaving. It’s been a very supportive community.

I read that you studied film in college—do you feel like understanding the elements of moving pictures influences the way you write? I feel like I can hear it between the buildups and the whispers, and in the contrasts and pacing.

Yes! To me, every song has a story, of course. What I love so much about music is that when those stories are vivid, even if you’re not in the same place I was when I wrote a song, you can still project the situation you’re going through onto it and get some help or relief or understanding from it. I want to write a song that’s abstract enough to be interesting and that gives people a place, like a mirror, to look and see themselves. That’s always a goal. I don’t necessarily want everyone to connect with a song the way I do, but I want to make sure it’s open enough that they would want to and that it’s possible.

Is this your first foray into releasing music?

I’ve recorded with Carbon Poppies and played with other bands, but this is my first full-on, I’m-gonna-do-this, throw-myself-out-there-in-front-of-everyone endeavor! It’s nerve-racking, and makes me really appreciate everyone else that does this.

Especially when it’s just you, it’s not like, Me and my buddies, playin’ in a band! It’s more like, Here’s me, and my heart, and my journal.

Exactly. The inner workings of my journal.

Do you see yourself releasing more material in the future?

Yes, definitely. I feel like I learned a lot the first time around. I want to keep improving, and my fear is that I’m 30—how many more records can I make before, uh, I die? That’s a weird way to think about it, but it’s true.

Anything else you’d like to impart on our youthful audience?

I think I wasted too many years not believing in myself musically, and that if I had believed in myself, practiced, and put myself out there sooner, I’d be even further along in what I’m doing now. Don’t waste time doubting yourself. Doubting yourself is a huge waste of energy.

But it’s never too late to stop the self-doubt and start what you want to do.

Yes. Plus, when I was in high school, I didn’t have other women to play music with, and to me that’s a tragedy. Every time I meet a young girl interested in music, I tell her to get an instrument and play with her friends. It’s going to sound terrible for a few years, but the more you do it, the more you improve. You’ll be able to look back and go, What were we thinking! We’re so much better now! Once I started playing with bands, my abilities improved dramatically—especially by playing with people who were better than me. You learn a lot and improve. ♦