How to deal with sexually inappropriate bosses and co-workers. 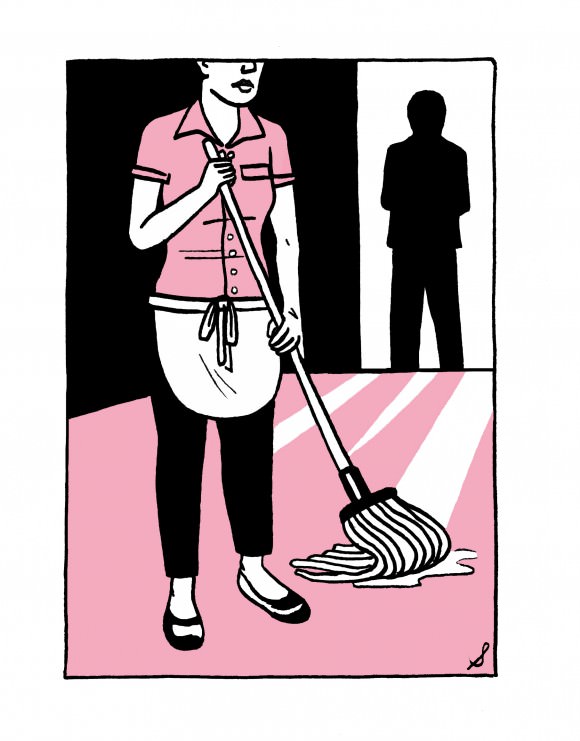 When I was a teenager, I had two jobs: one at a local store and one at a music label. I loved those jobs—I was making my own money doing work that I cared about, and I loved the feeling of independence and confidence that gave me. Then I was sexually harassed at both places.

The other employees at the store, the first place where I worked, were older than me, and most of them treated me like a kid sister. One guy, however, treated me like an annoyance, if he talked to me at all. I, like all the other clerks, tended to hang out there even when I wasn’t working. On one such day, I was hanging around behind the counter, probably biding my time before going to a concert nearby. The only other worker there was that one dude. He was standing next to me, watching customers shop, and then suddenly his hand was just resting on my ass. I told him to stop. He moved away, and I said something like “Don’t ever touch me again.” He replied, “C’mon, you liked it.” And I slapped him across the face. And then he slapped me back, twice as hard. I grabbed my things and left.

I told a friend at work about what had happened, and the next thing I knew, my hours had been cut in half—I now had only one short shift per week, on a day when my harasser wasn’t working. No one ever brought up the incident or explained why my hours had been reduced. No one ever said they were sorry about what had happened to me. I was scared that I would have my shifts taken away altogether—I felt like I was in trouble. Even though I had spent a summer glued to the Anita Hill hearings and I knew sexual harassment wasn’t a victim’s fault, I wondered if I had brought this on myself—if that’s what happens when you wear skirts, if these are just the rules of the world, if all my jobs would be like this. The empowerment I felt about having a cool job that I loved was gone—instead, I came to dread going to work. I felt like I had lost something. My newfound freedom had been taken away by this asshat.

A few months later, I got an internship at an independent record label that put out music by all my favorite bands. Packing up records for mail-order 12 hours a week was my idea of a dream job. The dudes I worked with were stern but kind: The label owner would sometimes help me with the most menial tasks and tell me about bands and records he knew I’d be into. He was an ex-Marine, paternal. Most of the time, though, I worked alone. One day, I was sitting on the floor, packing up a box, when I sensed that someone was standing behind me. It was a guy who occasionally worked in the same building, and I had seen him around a bit. I knew that he had been in a local band that people a generation older than me really cared about. When I stood up and faced him, he said something sleazy about my body, squeezed my butt, and pulled me closer to him. I froze and was silent for a second until he released me.

I walked home that day feeling like I had no idea what to do. Wasn’t this guy my boss’s friend? Would they even believe me? I saw the guy in the building every few days—was this going to happen again? These questions gnawed at me for days. I was afraid to talk about it at first, but then I kept thinking, These guys I work with are stand-up dudes. They care about me. They are not going to fire me over this. After a few days, I got my mettle up enough to to tell someone.

I saw an opportunity when another employee came by while I was working. He knew the guy who had grabbed me (let’s call that guy Creepface from here on out) but was also very tight with my boss. More important, he had always been nice to me. He was queer and friends with a lot of women, so I saw him as an ally. I followed him into the break room and pretended like I was getting a coffee. I started a “casual” conversation with him about the work he was doing, then added, “Oh, yeah, Creepface was working with you on that, wasn’t he?”

“He creeps me out,” I said, tentatively. He suddenly got very serious and asked me to elaborate. I started to tell him what had happened, and he stopped me and ushered me down the hall to the little room where I worked and shut the door so I could tell him privately, in detail, the whole thing. He was very solemn, and when I was done, he said, “Don’t worry. We will take care of this.”

When I came back to work the following week, it was explained to me that Creepface was not going to be around to bother me again. I was told not to worry, and that it shouldn’t have happened. I could tell that everyone was mortified. It took me a few weeks to find out how exactly the owner had dealt with Creepface: Apparently, my boss had grabbed the dude by the neck, shoved him against a wall, and told him that if he ever so much as looked my way again, he would fucking kill him.

Creepface must have taken the threat seriously, because he still wouldn’t make eye contact when he carded me at a bar 15 years later. I like to imagine that he’s still scared, and that thrills me a little. It feels like justice, or at least an appropriate response. It made me see that the people I worked with had my best interests in mind and protected me. My internship later turned into a job, and I continued to work with those people for years.

Some of my friends were not so lucky. They dealt with handsy managers at fast-food joints, guys that teased them about their bodies under the guise of flirting, intrusive discussions about their sexual experiences, unsolicited back rubs, and so much more—all of which, by the way, is sexual harassment. Some got punished for reporting or rebuffing the come-ons: I know girls who were demoted, assigned to demanding shifts, or had their hours cut. One friend had a high-profile internship where a supervisor 40 years older than her asked her out. She reported it to her direct supervisor, who did nothing. So she told a senior staffer and was reprimanded for going above the direct supervisor. All of these friends were working at places where sexism and harassment were established as commonplace and expected, and where the very people responsible for ensuring their safety knowingly put them in situations where they would be working side by side with their harassers.

On-the-job sexual harassment can happen once, or as part of a consistent pattern. It can happen in the office or on work trips or outings, in groups or privately. You don’t have to be the person being directly harassed to be affected by sexual harassment—if you are forced to witness harassment around you or work in an environment where sexist comments and attitudes are pervasive, you are a victim of it too.