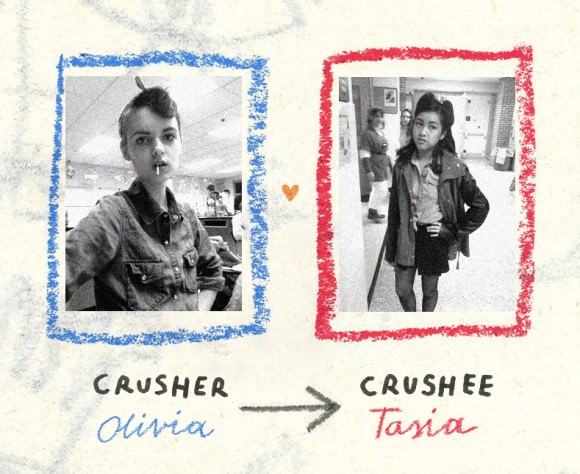 Collage of Olivia and Tasia in last year’s Halloween costumes, by Marjainez.

Olivia and Tasia are two 16-year-old bookworms/co-conspirators who grew up an actual stone’s throw away from each other in their Pennsylvania town. They met in second grade in a gifted and talented program at their school. Now that they’re juniors, there’s been some discussion of world domination (more on that soon). Based on what they told us about each other, we believe it’s totally possible.

Tasia (pronounced Tah-shuh) and I have been friends since we were in second grade, and we’re in eleventh now, so I guess that’s…more than half of our lives! I don’t remember the exact moment we met, though I do have a really vivid memory of drawing a map of my little cul-de-sac and saying, “I live here!” Later we found out that her house was literally in viewing distance of mine. So not only were we instant friends, but also instant neighbors!

Something I love about our friendship is that I can say something completely out there like, OMG, what if you had a tiny hand on each of your fingertips? and when most people would give me a what-are-you-talking-about side-eye, Tasia would go into a deep conversation about all the amazing possible functions of tiny hands! We have great ideas together and try to work together on school projects because we know that we’ll make whatever it is super creative.

Tasia is the platonic love of my life. She will always be my strong, brave, emotionally stable friend who inspires and motivates me, whether it’s to ride a roller coaster or be honest with someone about my feelings. Sometimes I wish I could just lift her up and shout, “LOOK WORLD, THIS GIRL IS SPLENDIFEROUS!”

Let’s talk about your friend Tasia.

You guys have known each other a long time. Do you love her for the same reasons now that you did when you first met her?

As we’ve both grown up, and as we’ve grown as people, I’ve come to love her in a deeper way, but some of the things are still the same. Like, we’ve always had similar interests. We were both in the gifted program at our elementary school—we were the only two people in it and would go to the program instead of our recess. We both really loved reading, and we bonded over Harry Potter. The gifted program is also how we discovered we were neighbors. There’s a window in my house that’s covered with trees now, but I used to be able to look out this one window and see her house. It was pretty cool.

Since then, have you sort of drifted toward and away from each other, or has she been a constant in your life?

We definitely spent a LOT more time together when we were younger. Now we’re both so busy with school stuff that it doesn’t matter if we do our homework together every night, you know? Or if she needs to cancel plans with me because she realizes she has a paper to do or something, we’re both very understanding of that sort of thing, and that’s really nice. We haven’t had a sleepover together in a while. Over the summer I had my first job, and I was working all the time. But we have that sort of relationship where it doesn’t matter how much time we spend away from each other. We can always come back to each other and things are right where we left off.

Can you put your finger on why you complement each other so well?

She doesn’t question herself nearly as much as I do. She knows what she wants and just goes for it. I’m really all over the place emotionally. I have a lot of ups and downs. Tasia is very neutral. That maybe doesn’t sound like a good quality, but it is. She doesn’t get as flustered as I do. When I come to her with stuff, she’s really good with advice because she really listens.

Can you think of a time when she gave you especially good advice?

Oh yeah, definitely. I had this other friend for a while who really didn’t treat me very well. It was little things, but he was always sort of talking down to me. And I’d go back and forth, like, Should I not be friends with him? Should I try to forgive him? Am I being too harsh? Tasia was always very supportive of me. She said, “Look, you need to do what’s best for you.” Now I’m not friends with him anymore, and she’s been very supportive of me and the decisions I made.

Do you still bond over the things you did when you first became friends?

Well, we both still have a love for reading, and I would say that we have pretty similar taste. We both really like Sylvia Plath a lot. And we’re both into music, definitely. A little while ago, Tasia and I did a duet for a concert at our school. We did “The Moon Song” from Her—the version Karen O. did with Ezra Koenig. We both played ukulele and sang. I did the lower harmony and Tasia did the higher one.

Did you know how to play ukulele before, or did you teach yourselves for the song?

Tasia knew how to play ukulele first. She’s better at it than I am, so I was doing the basic chords and she did the more complicated parts. 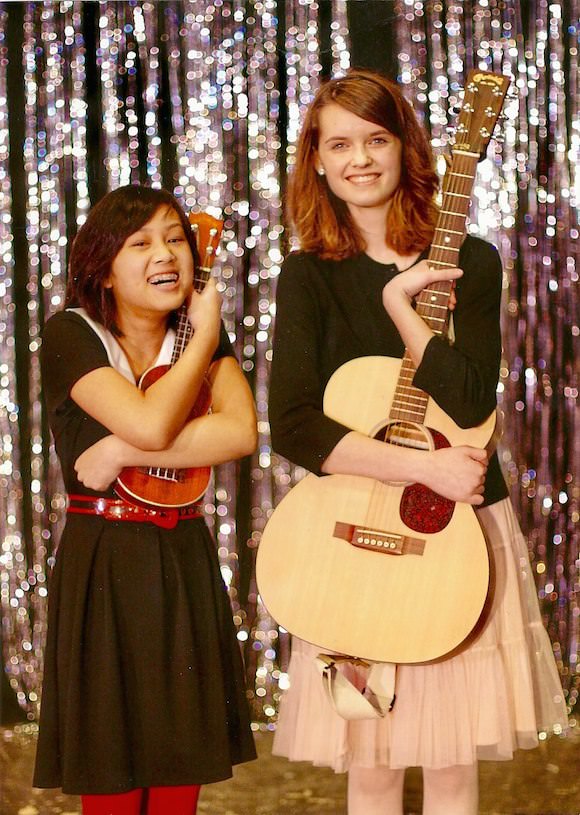 Does Tasia have any secret talents?

I don’t know! Tasia’s talents are pretty out in the open. Or at least to me it seems that way. She writes poetry, but she’s more into visuals. She does a lot of cool things in Photoshop, and she’s really into drawing right now. And—oh my gosh—Tasia is an AMAZING dancer. She watches a video and can just copy the dancing.

In your letter, you said she inspires and motivates you. Can you think of a time you took a risk because you were inspired by her?

How does Tasia look at the world differently than anyone else you know?

I think Tasia looks at things kind of the way I do. We were just talking about this earlier today during lunch. There are so many experiences out there that are yet to be experienced by us. We feel sort of trapped in this, you know, having to wake up every morning and going to school thing, where there’s no time to do anything but homework. She’s an optimist, but she’s also a realist. That’s what life is like for both of us right now, being teenagers. 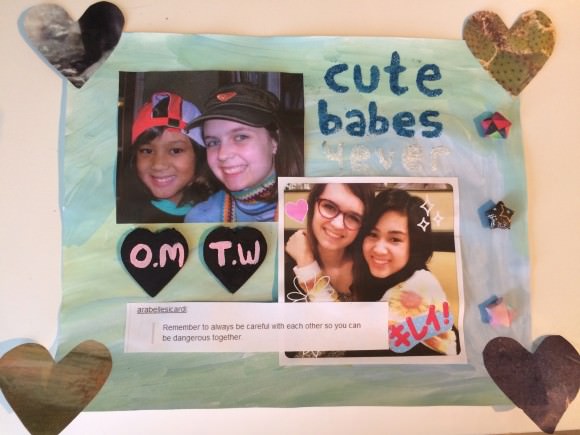 A collage Tasia made for Olivia.

I hear that one of the things you’ve always bonded over with Olivia is books, and I want to know: What is the best book she has ever recommended to you?

She let me borrow Extremely Loud and Incredibly Close by Jonathan Safran Foer, and I really loved it—the way there are all these little tricks in the imagery and how beautiful the story itself is. But whenever we read books, we’re always exchanging them. I borrow from her, and she borrows from me. That’s something we’ve always loved.

Do you guys ever disagree about books?

Sometimes we’ll have different ideas about characters and stuff like that, but we just talk about it and it’s no big deal.

Do you disagree about anything?

More like when it comes to school assignments and we’re trying to figure out questions when we’re working together. Other than that, we don’t really fight because there kind of isn’t anything to fight about. It’s so easy to talk to her, and she has the best advice. We just click. We play off of each other, and it’s really nice to be around her. I can’t really form it into words. She’s someone who’s always been a huge part of my life.

It sounds like you also work really well together—like on music and school projects. Can you tell me about a time you collaborated?

In our sophomore English class, there was an assignment where we had to teach the class for 45 minutes. We had to do a lesson about an American author, and we chose Sylvia Plath. We asked people to read one of her poems—it was “Daddy”—and answer questions about the symbolism and alliteration and all of that stuff. It’s a pretty dark poem, and we liked that you could talk about it for a long time and pick out every little piece of it. Teaching it made us nervous, but it was also a lot of fun. And just in general, if I’m working on something, I’ll ask her about it, and she helps me out. She’s a really good writer, and I’m more of a visual person, so whenever I need help with writing, I always ask her. She gives good feedback.

Olivia showing off a card Tasia made for her.

She said YOU really encourage her.

We have a similar way of looking at the world and taking in our surroundings. It’s really easy for us to talk about that. I can just give her a look and she’ll understand. We’ve been around each other basically all of our lives. We play off each other really well. It’s something that’s just really natural now.

Yeah, it’s been eight years now! She’s really awesome and dreamy. In the future, I think you might see her as an awesome librarian. And if you saw her on the street you’d just get really cool vibes from her.

Why do you say librarian?

She’s told me she’s always wanted to be a librarian, and it would suit her perfectly. She loves books, and she would do a really good job of recommending stuff to people. And it kind of fits her aesthetic.

She’s going through a change right now. Her style used to be really femme and cute. Now it’s more androgynous. She looks like a cute librarian who also owns a boat. She kinda has a sailor vibe.

An androgynous librarian of the sea!

Olivia sent photos of your Halloween costumes from last year. Have you talked about what you’ll go as this year?

We’ve discussed it a little bit. We’re thinking of dressing up as the guy versions of ourselves—like putting up our hair so it looks short and making our eyebrows shorter and thicker.

Do you have names for those selves?

I’m pretty sure I would be Page and she would be Olive.

Is there anything else we should know about Olive/Olivia?

She will one day rule the world.

I’m glad we’re getting to know her now, then!

If you want to nominate your platonic soulmate for a Friend Crush, send an email to Anaheed that includes both of your names, ages, and BIG, CLEAR pictures of the two of you, as well as a paragraph (or more!) about why that person is a gift unto this earth.