Reach Out: An Interview With Sheila Heti 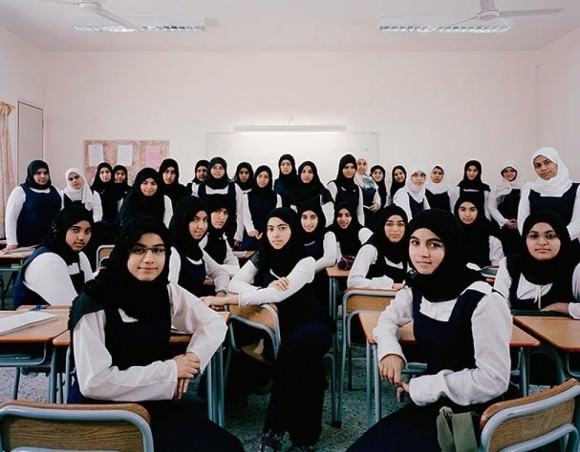 Photo of an 11th grade class in Bahrain, from a series of classroom portraits by Julian Germain.

First things first (I’m the realest): This month marks Rookie’s three-year anniversary! Thanks for sticking around this long, or for joining us recently. We begin our senior year with the theme WORK. Schoolwork, job-work, self-care-work. I just watched All About Eve for the first time, in which Bette Davis gives this speech as Margo Channing:

Funny business, a woman’s career—the things you drop on your way up the ladder so you can move faster. You forget you’ll need them again when you get back to being a woman. That’s one career all females have in common, whether we like it or not: being a woman. Sooner or later, we’ve got to work at it, no matter how many other careers we’ve had or wanted. And, in the last analysis, nothing’s any good unless you can look up just before dinner or turn around in bed, and there he is. Without that, you’re not a woman. You’re something with a French provincial office or a book full of clippings, but you’re not a woman. Slow curtain, the end.

Now, obviously this speech is horribly antiquated and actually about the work of keeping a man, but when I first heard her get ready to discuss the “career” of “being a woman,” I projected a lot onto it and was like, “SING IT, SISTER!” This is because lately, I have felt like a crucial part of my jobs both at Rookie and in the play I mentioned in July is to spend time every day working on just my CONFIDENCE. Believing in myself, being able to trust my instincts, not letting my work suffer due to girlish tendencies to recoil or to get myself down. In the early run of the play in Chicago, I had a very specific routine for self-care before a show so that I would be able to go onstage and think just about the other actors in relation to my character instead of about what the audience thought of me. It involved listening to Eve and Lil’ Kim and dancing in my dressing room and running around it touching everything and following my instincts so that I could achieve on a physical level this total self-trust. And I would write down and say out loud—because that’s when things become true, when an intellectual emotion becomes a physical knowing—that I am awesome and mighty and cannot be made small. So when Margo gave this speech, before I really heard what she was saying, I was like, OH TOTALLY, THE WORK OF BEING A WOMAN, HAVING TO FORCE YOURSELF TO BE A MEGALOMANIAC JUST SO YOU CAN REACH A BASELINE OF CREATIVITY! I guess for me it’s a matter of picturing my life’s work without confidence/stamina/GUSTO, and then picturing it WITH, and the WITH one is much more full and real and plentiful. Think of how many incompetent assholes are successful just because they are confident! Or of how many competent people hold themselves back! If you can master both competence AND confidence, young grasshopper, then you ought to be able to do anything you want. And as humiliating as it might feel to write the words “I AM MIGHTY” down in a Moleskine…who cares about that, I guess. There is a bigger issue at hand.

So that’s all about job-work and self-care-work, but before I hand this month off to the rest of our contributors, I would like to share with you three games I played with myself in high school to make schoolwork more bearable:

1. Keep an ear out for any amusing dialog that could one day make for a good TV show and write it all down, seeing every class as research.
2. Make outfits in your brain by combining stuff different people in your class are wearing.
3. Bring a bag of your candy of choice to class and eat a piece every time the same student interrupts the teacher.

Have a solid back-to-school, and thank you again for being here with us as Rookie becomes a SENIOR. (Expect a lot more bullying and penny-throwing.)