Without a Hair in the World

Shaving my head changed the inside of it, too.

How to Make a Leaf Garland Necklace 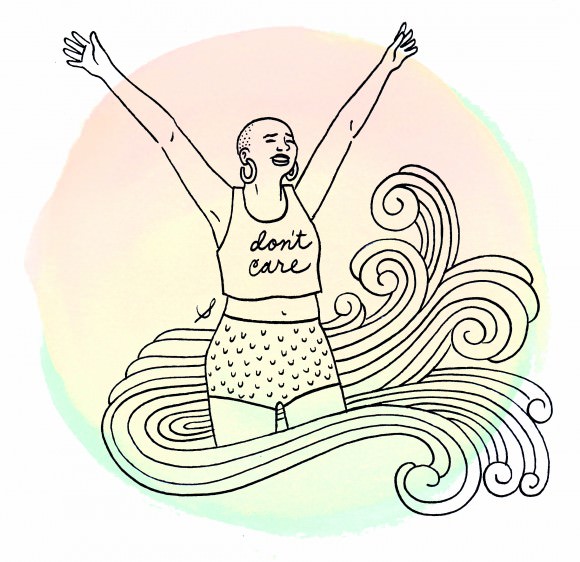 This summer, after dyeing my hair every color under the sun—including, but not limited to, pink, blue, purple, green, and an intense Day-Glo yellow—I got sick of it and shaved it all off. When I saw my new self in the mirror, I realized that this new look was no mere aesthetic tweak. It felt like psychic rebirth.

When I had technicolor hair, I was subjected to a fair amount of questions from strangers about it (usually of the “WHAT’D YA DO TO YOUR HAIR?” variety). A woman with a shaved head encounters a totally different sort of attention: New acquaintances often seem puzzled, and cashiers and bus drivers act noticeably shy with me now. I get a lot of extra space on even the most crowded sidewalks. After decades of silently cursing street harassers, I feel like I’ve been put into a no-catcall zone by my baldness. I finally had a look that was too strange to be immediately identified as “sexy.” (Perhaps it takes a beat for your basic chauvinist pig on the street to decide whether or not he should advertise the fact he is attracted to a baldie.)

Why aren’t more women bald? In every practical sense, it should be a classic summertime look! I spend less money on shampoo now, obviously, and I love not needing a hair dryer. My neck doesn’t sweat when it’s hot. But, of course, we have rules about this kind of thing. People might think a woman with no hair is weird, sick, unemployable, or even—gasp—a lesbian. Obviously, that’s stupid, and not only because some of the world’s most beautiful women are bald, or have been in the past. (A shortlist: Grace Jones, Lupita Nyong’o, Sinead O’Connor, Alek Wek, Erykah Badu, Solange, Megan Fox, Natalie Portman, and Demi Moore.) During the days that preceded my decision to shave, my personal deity was Amber Rose, a model and fashion designer with a signature buzzcut. She’s navigated a relationship with Kanye and a marriage to Wiz Khalifa, so I wasn’t worried when one friend told me that no man would find me attractive if I shaved my head. (All will be gratified to know that, on a personal level, this turned out to be completely false.) 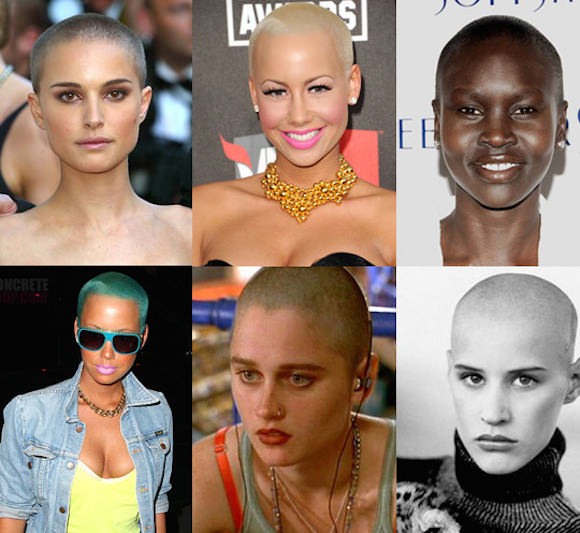 The laundry list of beauty norms presented to us by fashion mags, nosy strangers and the people in our lives who are “only looking out for our best interests” is not mandatory reading. And when you ball up that list and toss it into a nearby metaphoric garbage bin, an interesting thing happens—the people who ARE looking out for your best interests will get it. When Willow Smith shaved her head, prodding from the media about how her parents “allowed” their young daughter to lop it all off led Jada Pinkett Smith to make a statement on Facebook:

This is a world where women [and] girls are constantly reminded that they don’t belong to themselves; that their bodies are not their own, nor their power or self-determination. I made a promise to endow my little girl with the power to always know that her body, spirit and her mind are HER domain. Willow cut her hair because her beauty, her value, her worth is not measured by the length of her hair. It’s also a statement that claims that even little girls have the RIGHT to own themselves and should not be a slave to even their mother’s deepest insecurities, hopes and desires. Even little girls should not be a slave to the preconceived ideas of what a culture believes a little girl should be.

Jada makes an excellent point: Your personal style is of small import to anyone but yourself, and it’s never necessary to be easily digestible. As Rookie’s own Amy Rose once wisely counseled me, there’s nothing wrong with wanting attention. Attention can be a great thing, and there are all different ways to get it: becoming professionally successful, performing onstage, being in love, or having a baby, for example. Or shaving your head. Most of the time, we do these things because we just want to, and because they make our lives better.

Baldness has a certain power to it. It’s not just freedom from the tyranny of hair products, unexpected rain clouds, and basic men in the street, but a liberation from other people’s notions of “womanhood.” I won’t be bald forever—I can’t stick to a single country of residence, much less a hairstyle. But I’m convinced that I’ll hold on to the change that’s happened inside my head long after the one on the outside has grown out. ♦