I guess it’s supposed to be an insult, but scaring adults seems pretty cool to me? 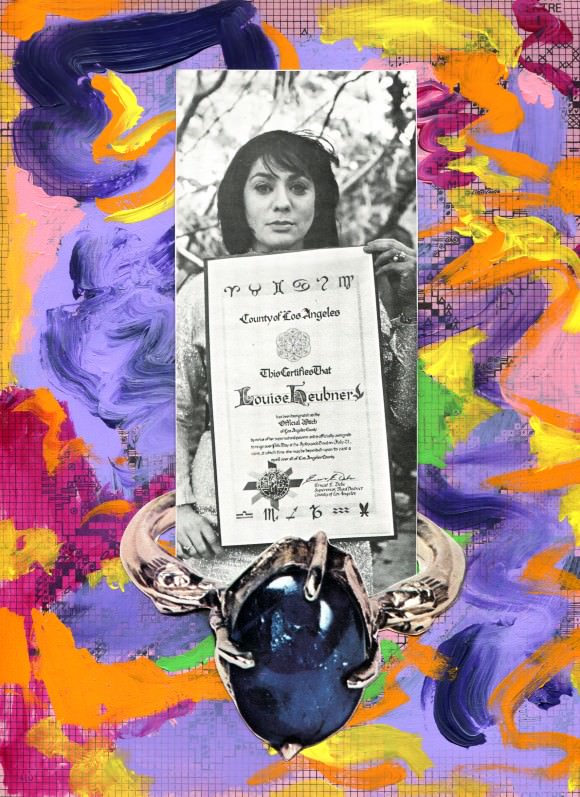 Collage by Minna, using a photo of Louise Huebner taken on the day she was designated the “Official Witch” of Los Angeles County.

One day back in 10th grade, we were in gym class, playing kickball, and our two teams were neck and neck. A girl on the other team made a home run, but another kid said he’d caught the ball before it hit the back wall. The gym teacher believed him and called a foul ball.

“That wasn’t a foul!” the girl complained. “We should get our points!”

The teacher raised a finger and one corner of his mouth and yelled back: “Witch!”

I remember laughing at the time. I had never heard the word witch being used as an insult before, and it struck me as kind of hilariously old-fashioned—we weren’t in 17th-century Salem, we were in suburban New York in 2013. But then I saw how red the girl’s face got and felt ashamed for laughing, and furious on her behalf. All she’d done was stand up for herself—why did that make her a witch?

The irony, of course, is there’s pretty much nothing cooler than being a witch. This we know, because our pop culture tells us so: All sorts of movies and TV shows and books feature badass witches who wield their powers with confidence and grace. Take, for example, the Hex Girls, the all-witch eco-goth rock band that first appeared on a Scooby-Doo made-for-TV movie in the late ’90s:

In the beginning, they’re suspects in whatever spoooooky mystery Scooby and his gang are trying to solve that day, but the Hex Girls quickly win the hearts of the Scoobies—and, apparently, the home audience, because they kept showing up in later episodes and TV movies. And they get bonus cool points because the drummer was voiced by Jane Wiedlin of the Go-Go’s!

Then there are the witches that aren’t so friendly, but are still undeniably cool. This is the kind in the 1990 movie The Witches, based on the Roald Dahl book of the same name. A coven of sorceresses, led by the Grand High Witch, is out to take over the world, and for some reason I can’t completely remember, their plan starts with turning all children into mice. While the Grand High Witch, played by Anjelica Huston, has definitely become one of my style icons, she scared my pants off when I was little.

See? Witches can be terrifying, especially if your expectation is that women are supposed to be “sweet.” In the 1998 movie Halloweentown, Marnie, a girl who is about to become a woman—a gross way of saying she’s almost 13—finds out that she’s actually been a witch all this time, but her mother never told her, because she wanted her to live a “normal” (aka BORING) life. What’s more, if she doesn’t begin her official “witch training” before her next birthday, Marnie will lose her powers FOREVER. Moral of the story: A girl’s growing up and realizing her full potential is a scary possibility that many people would rather not let happen. Also: Puberty is dangerous.

We tend to internalize these messages at exactly the most inconvenient moment, when we’re already being driven mad by all the hormones coursing through our bodies and the physical, mental, and emotional changes they cause. At this crucial and delicate time, when we’re just starting to feel all the wonderful and confusing and weird feelings that comes with sexxxxual expression, we’re told to rein it in—these new powers of ours are apparently too threatening to ever be enjoyed. Suddenly our shorts are “too short,” we can’t have boys over in our rooms, and we’re told that we’re now supposed to be something called “ladylike”?

I was in seventh grade when I felt this strange urge to start wearing makeup. Lucky for me, this coincided with my discovery of feminism and alternative music (a savory combo I would recommend to any tween out there). The adults around me reacted strangely to my new interests. “You sure have grown up a lot,” they’d say, in a tone that implied that growing up was somehow unseemly.

I think children are easier to like than adults, in general, and certainly more so than teenagers, a group that is almost universally reviled. Children can’t afford to rebel in any significant way, because they are completely dependent on the adults in their lives, and they’re difficult to be afraid of (except, like, this kind) because they are so little! And cute! Whereas teenagers can drive themselves places and get jobs and are probably already having sex, plus we are awkward and gangly and acne-riddled and gross. Worst of all are teenage girls, because we are on the cusp of becoming GROWN WOMEN, aka the scariest humans of all!

All of this, I think, explains why my 10th grade gym teacher called my classmate a witch. She was a teenage girl who suddenly refused to submit to someone else’s authority. She was disobedient, and defiantly so. She spoke up for herself, and for that she was shamed, by her teacher and her classmates, myself included.

Looking back, I think we were all a little scared. Power is scary! But it’s also awesome, because it helps you speak up for yourself and others and do all the cool things you’ve dreamed about doing. It’s a good kind of scary, in other words—the kind you feel before going onstage for a performance or letting other people read something you’ve written or trying out for a varsity team. At that moment, you want to stop, turn around, hide—anything to avoid what’s about to happen. But then you do the play, share your work, make the team, take the plunge—and that feeling afterward, that mix of adrenaline, elation, pride, and satisfaction, is the best damn feeling in the world. It feels like learning you have magic powers, and that you can do ANYTHING YOU WANT with them. ♦