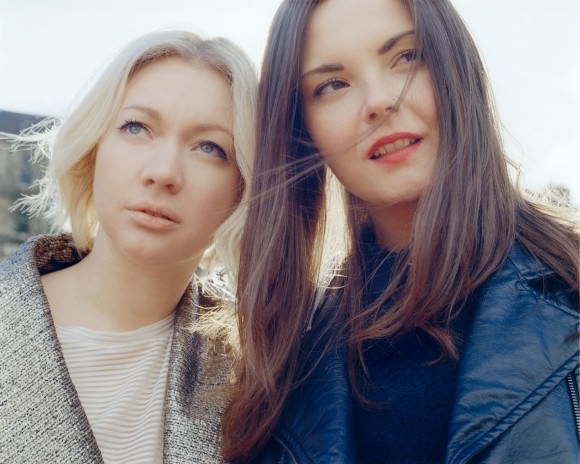 Like many good things, the Scottish band Honeyblood is the product of friendship. After a pal suggested that the singer-guitarist Stina Tweeddale approach the drummer Shona McVicar about collaborating, the two instantly adored each other, and it was off to the races. Since their formation in 2012, they’ve been writing songs, performing, and creating mix tapes, which they put out independently.

The two have gone from DIY hustling to getting swooped up by FatCat, who released their self-titled debut album last month. When I called them this week, they had just arrived for a gig in Leeds, but were still happy to chat about the car games they play on tour, the beauty of a friendly audience, and recording this month’s theme song: a cover of Liz Phair’s “Mesmerizing” produced by former Hole and Smashing Pumpkins bassist Melissa Auf der Maur.

ANNE T. DONAHUE: Can you tell me a little bit about how this cover came to be?

SHONA: We were in America and Adam at our record label suggested that we maybe speak to Melissa Auf der Maur. She’d actually listened to our album and thought it was great, and was happy to work with us [on the cover]. So she popped down to the house we were staying in, which conveniently had a studio in it, and spent the day with us while we recorded the song. It was a chill way of doing it, but we were so happy to work with her.

I like that your friendship takes front and center stage in your band. It seems like a huge component in the music that you make and the live dynamic that you have, and I think it’s an exciting time for friendship [like that] in pop culture right now.

SHONA: Yeah! You couldn’t be in a two-person band and spend every minute together travelling and touring and sleeping in a hotel room together and playing together and collaborating together if there wasn’t that.

STINA: Definitely – again, one of the things that’s pretty apparent is that I [couldn’t write] the songs without Shona, and the music’s who we are, isn’t it? [Our friendship] goes hand in hand with what we make. We like to see other bands in the same tradition as well. It’s a big thing at the moment.

How did you meet? I know you were both in different bands—is that where everything started?

STINA: Not really. The way it came about, I was actively looking for some people to start a band with. A mutual friend was like, “Hey, you should talk to this girl. She plays drums, she’s probably into the same things as you, and she’s really good.” Shona didn’t even know this until a couple months ago, but I stalked her on the internet for a wee while to find out who she was. Then, by chance, we met at a bar one night when we were with our other bands. I went up to her and said, “Hey, I heard you play drums. Do you wanna jam songs that I wrote?” She said yeah, we had a practice and that was it!

That’s so cool! What kind of bands did you bond over?

STINA: At the time, the Best Coast album had come out. We both loved it, and it gave us a bit of inspiration that we could play music and do everything just ourselves. We also like a lot of similar stuff: PJ Harvey and the Breeders are big influences on our music. We like to play heavy and fast as well, so it all kind of crosses over.

Is that what you listened to growing up?

STINA: Riot Grrrl and rock bands were my kind of thing. On the other side, my biggest childhood vocal influence was the Smiths. I love Morrissey, so I grew up listening to a lot of Smiths stuff. Shona is more into punk —she’ll tell ya!

SHONA: Yeah! It’s like Stina said, we liked a lot of the same music: I’ve never met anyone else’s who’s known them, but there’s a girl-band called Tuuli that we both love. [I also listened to] a lot of punk bands that are a bit heavier. Between us, we have a lot of diversity, which is good, because it makes our songs what they are.

And in September, you’re embarking on a UK tour.

SHONA: We’ve done one before, but this is the main one after the album. It’s exciting, because after the album came out, we did a few album launch parties, but we really want to go back and do proper shows.

Has touring challenged your friendship or has it made it stronger?

STINA: I think we’ve gotten to know each other a lot better! It’s nice to have someone to chill with. Otherwise, it’d be boring to take, like, a 10-hour drive every day. We make up little games and stuff, and now we’ve got a lot of good memories—probably more memories together than we have with anyone else.

Ooh—what games do you play?

STINA: The last time we were in America, we had The Jogging Game. There were always a lot of people out jogging wherever we went, so when you spot a jogger, you got a point—

SHONA: You’d have to shout, “Jogging!”

STINA: You got more points if they had a headband or excessive sports gear on.

This is actually the best—a jogger actually ran past my house when I was talking to you!

STINA: It got pretty intense! I got a bit angry because Shona kept winning, but she was the dark horse. Once, I’d been steady, and then she got six points when a group of joggers went by at the same time, and they all had headbands on, and that just wasn’t fair.

When you guys were in America, what other novelties did you observe?

STINA:: The way that we interact with people who come to our shows is different in America, because in America, people will come up after and talk to you just like you’re their friend. I love that. I think that’s great. In the UK, a lot less people do that, maybe because they’re a bit nervous, but in America, they just come up, and it makes us feel really welcomed. We’re far away from home, so it’s nice to meet people who get excited about our music and who are really friendly and lovely.

They see your friendship and want to absorb those vibes.