A gorgeous Beyoncé cover that you can listen to while reading Tei’s thoughts on adapting to change and psyching yourself up when you’re scared. 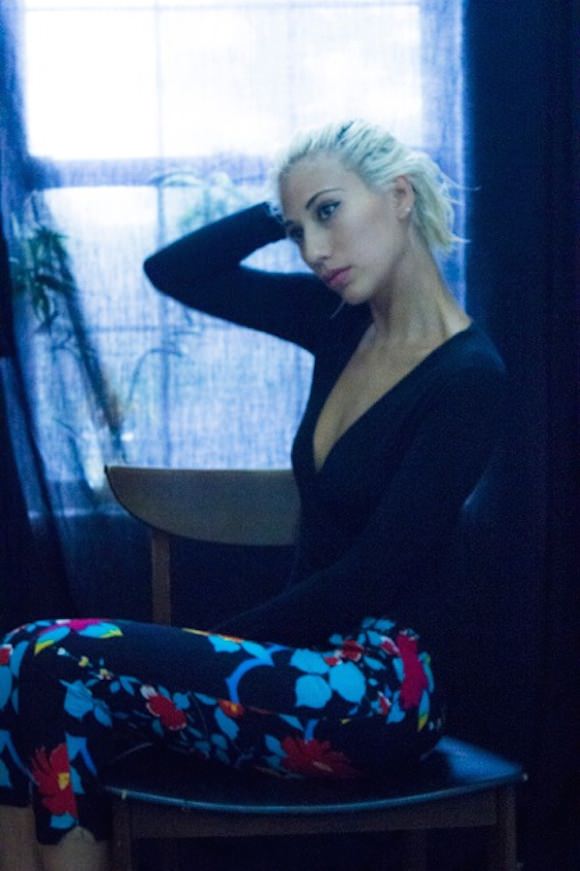 Valerie Teicher—aka Tei Shi—got used to moving, adapting, adjusting, and thriving as a child. Born in Argentina, she was shuttled around between Bogotá, Colombia; Vancouver, British Columbia; and Montreal, Quebec several times throughout her childhood and teendom.

Now living in Brooklyn, Tei recently got together with Gianluca Buccellati, whom she met as a student at the Berklee College of Music in Boston, to record a cover of Beyoncé’s “No Angel,” which we are beyond excited to get to premiere right now!

When I talked to her recently, Tei shared her thoughts on her nomadic life and told us what she listens to when she’s scared.

ANNE T. DONAHUE: Why did you want to cover “No Angel”?

TEI SHI: I heard Beyoncé when it first came out, and that song just stood out to me. It seemed a bit different from what I was used to hearing from Beyoncé—it has an edgier, less-pretty vibe to it. So immediately I was like, “I want to sing this and mess around with it.” I started putting it together with my band, and the live response was positive enough that I was motivated to do a recorded version.

Have you ever seen Beyoncé sing it live?

I actually went all the way to New Jersey with my roommate and some friends to see her about a month ago. I’d never seen her live, and we had probably some of the worst seats there, but she was still incredible. She didn’t do “No Angel,” though. But in the end I was kind of secretly glad she didn’t do it—I kept saying to my friends that if I saw her sing it, I’d be put to complete shame and probably not be able to do the song live ever again.

I know you moved around a lot as a child. What was it like to find yourself in Vancouver after growing up in Bogotá?

My two older sisters had moved to Vancouver for university, and my parents kind of followed them, moving my [other] sister and me there. It felt like we were going to visit them and never left. It’s funny, because even though that [first] move was such a drastic one, I was only eight, so it went over my head. At that age, you’re so malleable and oblivious—you’re not focused on, like, feeling existentially fulfilled, so not much actually changed in that sense. I just started school, made some friends, dropped my cute Colombian accent—which was the biggest mistake ever—and became Canadian. Only later did I realize how insane of a change that had been. And Vancouver has changed a lot in the past 10 years—growing up, I felt like I was the most exotic person in my school, and the fact that I had grown up in Colombia seemed wild to most of my peers. Now, the city is really multicultural and rich with diversity—but Bogotá is also a really cultured and stimulating city.

Did you drop your Colombian accent on purpose?

I don’t think it was a conscious choice—just going to school pretty much right away after we moved and having to dive into an all-English environment made me quickly assimilate. I probably wasn’t even aware that I had a different accent at the time.

Moving to a new country isn’t easy—do you think doing it so much at such a young age affected your personality, or the art you would eventually make?

Oh, I definitely think I’ve been able to embrace and tackle new things quickly as a result of that predisposition, for sure. Performing live was a really new and scary thing for me, more challenging than most of the moves in my life. I played my first live show in October. The anxiety I feel before a move or travel is almost always on the excited end of the anxiety spectrum—it’s more motivation than dread—but the times when I experience that kind of anxiety is before playing shows. I strive for change, though—I feel like I need it. So yes, I’d say that having to develop that ability to pick up and go has made me able to tackle things more easily. It’s also forced me to develop a pretty strong sense of self. When your environment changes so much around you, you have to make yourself the constant.

How do you talk yourself down when you get scared or anxious?

At first, I could barely sleep the night before [a show] and couldn’t eat the whole day of, and I’d feel so much dread beforehand. Now, I feel more comfortable. I go to the bathroom like every 15 minutes to gather myself, and I have a kind of motivational theme I listen to before every show that soothes and pumps me up.

What song is it?

It’s . . . the Arthur theme song. I’m scared that now that it’s out in the open, the song will lose its magical powers! ♦