My Grandmother the Saint

Her magic was real. 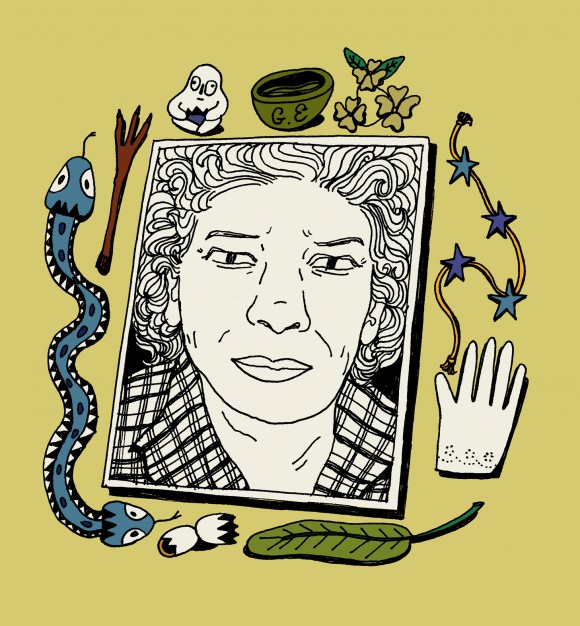 Guadalupe Gomez Escobedo was the name of my grandmother. She passed away when I was 19, but I still have dreams about her spiritual beauty, and she remains one of the most important and influential women in my life. When I was growing up in Cheyenne, Wyoming, I spent all my time at her house, playing while she cooked enchiladas and helping her roll the handmade tortillas she packed by the dozen to sell from her porch. Sometimes she let me apply lipstick and rouge to her face and giggled at the imprecision of my baby-hand. She had a mischievous streak and was the originator of what my family calls the “Escobedo roll”: a cluck of the tongue followed by a so-over-it eyeroll, as if to say, Gimme a major break. Grandma was full of love, but she was also not having it.

Her laughter was glorious, and she loved to dance. Whenever she swept the porch, she would hum “Cielito Lindo,” perhaps the most well-known Mexican song ever. “Canta y no llores, porque cantando se alegran,” the lyrics go—“Sing and don’t cry, because singing makes you happy.” Grandma’s combo of sparkle and side-eye represents my highest character aspiration.

Every day before Grandma went to church, she wrapped her hair in a scarf to protect it from the wind. To me, it was a halo. Like a real angel’s. I swear, she lit up like a lightbulb! Part of this was because she was actually magical. My grandmother was a curandera, a folk healer who uses natural medicine and prayer to cure physical ailments.

For centuries, curanderas were the most important practitioners of medicine (and sometimes shamanism) in Central and South America. Native communities revered and trusted curanderas as doctors, psychologists, and spiritual healers. Growing up on a rancho in Leon, Guanajuato, my grandmother learned the faith-based customs practiced by indigenous people before Spain colonized Mexico in the 1500s. My tía Josie, one of Guadalupe’s daughters, remembers one special tincture of herbs and oils that Grandma used as a cure-all: “The only thing she didn’t put in it was marijuana, ’cause that was illegal,” Josie told me at a family reunion. “She would massage you with it, and it cured everything! Even the flu! Once, my mom cured a woman with whiplash, too.”

Grandma married at 16 and snuck into the United States not long after, hoping to avoid the violence that had killed her father in the Mexican Revolution. When she was naturalized a few decades later, she signed her citizenship card with an X because she couldn’t read or write. In its photo, she’s peering into the camera, looking weary but happy. By the time I was born, she had put aside a lot of her curandera skills in favor of Western medicine. She still used a few of her magical healing skills on me, though. If I had a cold or a sore throat, she brewed a blessed hot tea made from cayenne, lemon, herbs, and silent prayer. To cure a headache, she made me sit in a corner and stare at the wall until I felt better. I’m not sure how—maybe she was telepathically healing me?—but it always worked.

My grandmother’s remarkable experiences and supernatural healing powers made her seem larger than life. I idolized her, and though I didn’t understand her spirituality, I trusted it as fiercely as I trusted her. A devout Catholic, she had altars to the saints all over her house. Their regality, and the solemn quietude with which she prayed to them, seemed to carry enormous gravity. Grandma’s particular devotion to La Virgen de Guadalupe, the brown Virgin Mary who became the crux of Mexican Catholicism after her (alleged?) 1531 appearance before the peasant Juan Diego, seemed more divine than scripture, priests, and fancy cathedrals.

My grandmother and her daughters spoke about La Virgen de Guadalupe as though she was their mother. This version of the Virgin Mary is so important to Mexicans because, while she may represent the Catholic “mother of god,” many depictions of her also portray Tonantzin, the Aztec goddess who is considered the matriarch of all creation. In my house, La Virgen was the deity above all others, and because my grandma emanated love, power, and feminine strength in addition to ACTUAL MAGIC, I truly believed she was a reincarnation of La Virgen. She was even her namesake—Guadalupe!

My family and I aren’t alone in associating a beloved maternal figure with La Virgen. In the book Our Lady of Guadalupe: Faith and Empowerment among Mexican-American Women, Jeanette Rodriguez writes about how the image of La Virgen is imprinted on the brains of second- and third-generation Mexican-Americans like me, and how her importance in our culture often fosters our feminism. After interviewing many women, Rodriguez found that the following characterizations were most associated with La Virgen:

She was most frequently perceived as a mother-type […] as someone to be prayed to […] who brings comfort and peace […] and as someone who is strong and/or gives strength. […] Our Lady of Guadalupe elicited reflections on the respondents’ own mothers (“She’s strong like my mom”).

“She does seem like [La Virgen], the more we think about her,” said my tía Connie as we remembered my grandmother at the reunion. “The amazing part: she never ran out of food for the family, no matter how poor she was. I used to think about the parable of the bread and the fishes, how they never ran out. Another thing, Julianne: One time, she was sitting on the porch all to herself, she didn’t have a single penny to her name, but all she could think was, All I want is a watermelon. Lo and behold, as she was thinking that, a guy came down the street in a truck and said, ‘Hey lady, want a watermelon?’ Things would happen to her that were so unusual!”

My aunt Connie is 81, and her watermelon story may be embellished a little bit. But more important to me than the facts is that Connie still thinks of her mother as a magical being, one whose sheer essence attracted the things she needed most when she was at her lowest, and who had the generosity to share them with others. She had a magnetic, supernatural, and pure goodness that drew people and things to her because they wanted to be in the vicinity of her beauty and love. Her very presence soothed people, healer or no.

Guadalupe Escobedo, my grandma, my muse, lived such an extraordinary life that I can still feel her glow guiding me to trust my own instincts about what is and isn’t possible, just as she did both as a curandera and as a radiant person in all things. She still inspires me to become the woman I want to be—strong, funny, powerful, loving, smart, and in possession of an essence of enchantment that transcends any earthly explanation, like hers did. I’ll never know whether my grandma was truly a shaman, but if the way she continues to empower me isn’t magic, what is? ♦