Literally the Best Thing Ever: The House on the Rock

A WONDERCREEPLAND OF J’AMAZEMENT. (All photos by Krista unless otherwise indicated.)

How (Not) to Impress Your Crush 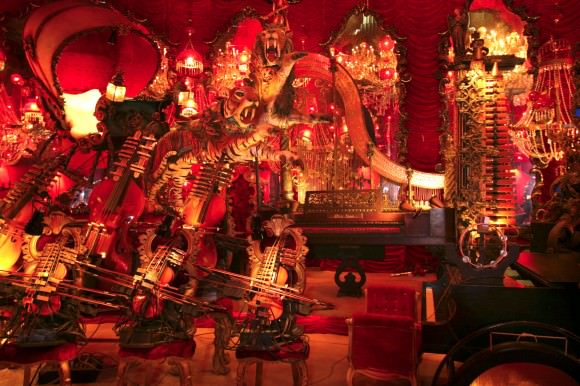 I need to tell you about a place. It’s a place so massive, so amazing, so thrillingly weird and kitschy and creepy and utterly awe-inspiring, that I’m actually not sure I can find the words to adequately describe it, and I am never at a loss for words. But this place truly defies human language. I first visited it last month, on a spur-of-the-moment trip with my girlfriend, and I haven’t stopped thinking about it since. I don’t think I ever will.

The place is called the House on the Rock. It’s in Spring Green, Wisconsin, about an hour west of Madison, and I am 200 percent certain that it needs to shoot straight to the top of your list of dream vacation destinations. Forget amusement parks and water parks—go find the nearest licensed driver and demand to be taken to this WONDERCREEPLAND OF J’AMAZEMENT.

Like I said, it’s really impossible to convey its mystery and majesty in words, but here are some basic facts: The House on the Rock was designed by one Alex Jordan, a man who was fond of picnicking on Spring Green’s tall, craggy sandstone formations known pinnacle rocks. In 1945, he started work on a house he was building from scratch on Deer Shelter Rock, a 60-foot-tall column of rock in the middle of a huge forest. People in the area got interested in what he was doing, so he began charging admission to see his building site and completed rooms. And then…he just kept building! Using the money he was charging people to see his growing house, Alex Jordan, always a collector of antiques, kept obsessively adding more and more rooms to contain his various collections. He collected everything, you guys: toys, cars, instruments, nautical stuff, taxidermy, guns, glassware, dolls, circus memorabilia, Victorian antiques—anything you could possibly think of to collect. He opened the house to the public for official tours in 1959 and kept right on adding to it until his death in 1989, an event that did nothing to quell the public’s fascination with the place.

I know that this is the first time most of you have even heard of the House on the Rock, but it’s actually a huuuuuge tourist attraction in the Midwest. When you’re a kid growing up in Wisconsin, like I was, there are school trips to the House on the Rock, and it’s a totally common thing to hear someone talking about a weekend trip they just took there. For some reason I cannot even begin to understand, however, my class never took a trip to the HOTR, and my parents never wanted to go. HOW COULD YOU NOT WANT TO GO TO THE HOUSE ON THE ROCK? From the moment I heard about it, in about second grade, I was frothing at the mouth to go. My school friends would return from trips with their OBVIOUSLY FAR MORE SENSIBLE families changed people. They would try, in dreamy voices, gazing off into the middle distance, to describe the things they’d seen: There were stories of giant indoor carousels and whole rooms full of porcelain doll, of hundreds of instruments that played themselves and endless hallways of miniatures. Apparently there was a whole town, with streets and houses and carriages, inside this house. I heard there was a sea monster bigger than anything I could imagine in the basement. Everything about this place sounded wonderful and scary, and I was clearly wasting my life doing anything but going straight there.

It took more than a decade for me to finally make this lifelong dream come true. But I did it, you guys. I saw the House on the Rock with my own eyes. Last month, finding ourselves with an extra day off work and a car in working condition, Jen and I decided to drive the three hours from Chicago to Spring Green. And let me tell you: WE WERE NOT READY.

Apart from the enormous dragon sculptures decorating the long driveway leading to the building, the House on the Rock looks fairly normal from the outside. It’s a big (but not mind-bendingly enormous) brown house surrounded by gardens. 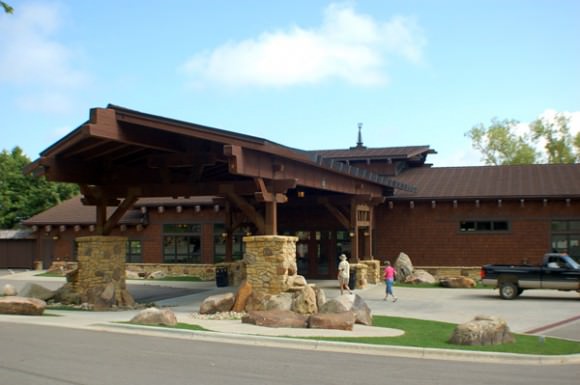 Much of the structure is underground or hidden by trees, so it’s impossible to tell how big it really is until you’re in it. First-time visitors have no idea what they’re in for.

We stopped at the (totally normal and beige!) visitor’s center to buy tickets and pee, and that was when I saw the first hint of the hidden weirdness of the place. The bathroom looks like this: 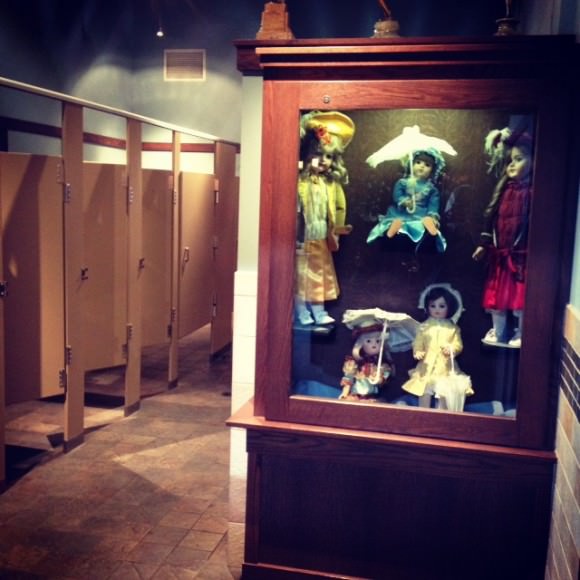 The HOTR is divided into three enormous sections. There’s the Infinity Room, which juts out 218 feet, with no visible support, over the forest floor, scaring the crap out of anyone with a fear of heights (hi there) with its panoramic views from more than 3,000 windows. 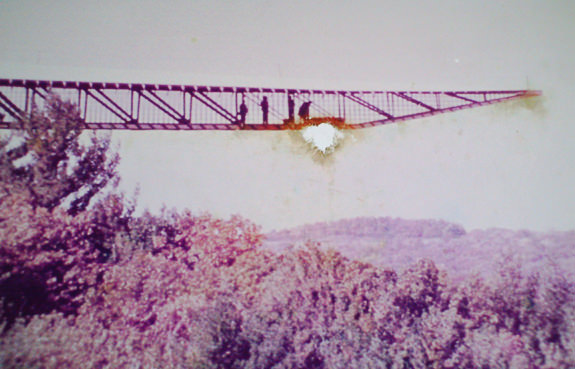 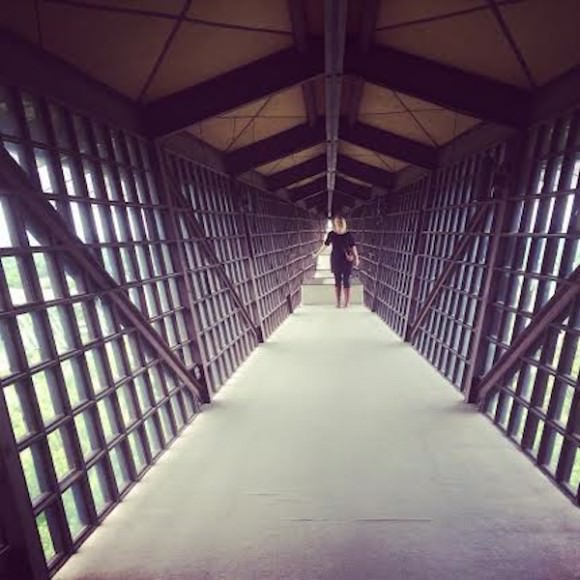 Here I am inside the Infinity Room. I am pissing myself in fear only just a little. (Photo by Jen Larson.)

There’s Alex Jordan’s mod-yet-caveman-y original living quarters, lit with dim red lights because, as one of the docents explained, “he liked it that way.” There’s the Streets of Yesterday, an entire replica Victorian town, complete with furnished houses and shops you can look into, streetlights, and eerie old fortune-telling machines on every corner. 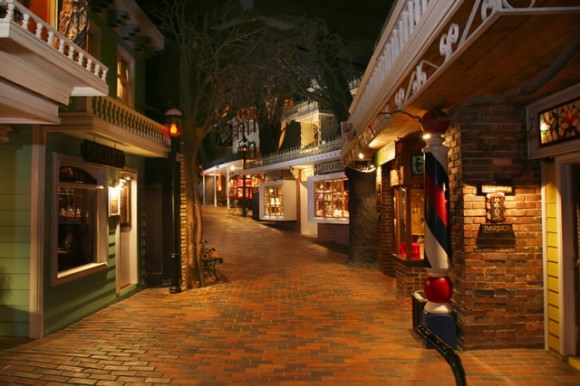 Image via Light at Home. 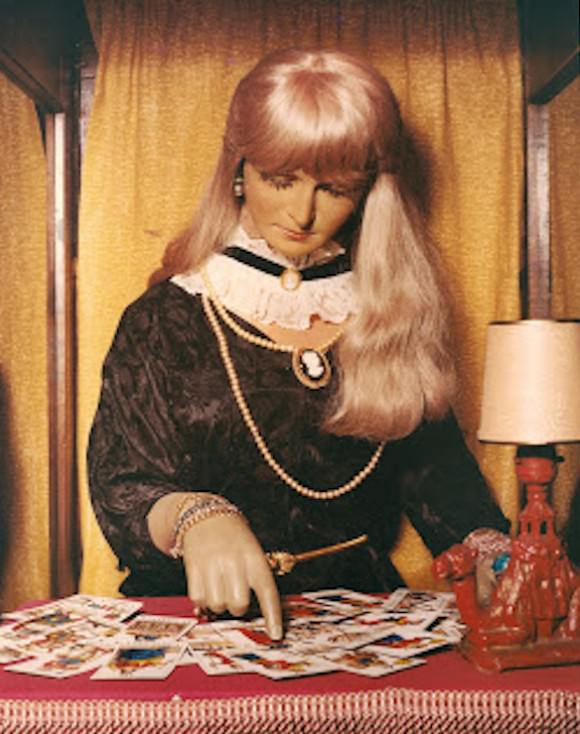 Image via The House on the Rock Journal.

There are indeed, as my classmates testified, entire rooms filled with automated musical instruments, some of which play endlessly, whether anyone’s watching or not, and some that need tokens (they give you tokens when you buy your ticket) to turn on and play. Clumps of visitors stand around lavishly decorated rooms in shocked silence, watching full orchestras play themselves. I think we can all agree that there is something inherently creepy about instruments that play themselves; it was in one of these rooms that we saw our first (but far from last) crying kid. 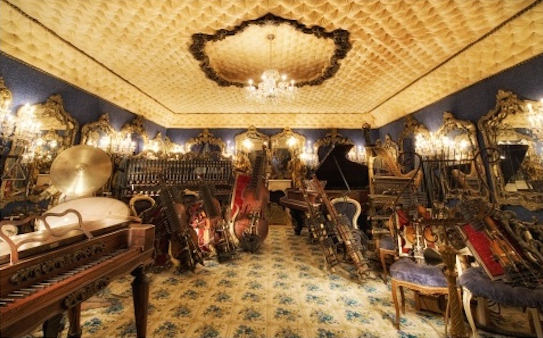 Nooooothing scary about instruments that don’t need players. (Image via The Golden Sieve.)