The only person with the power to pull me out of my stubbornly unimaginative existence. 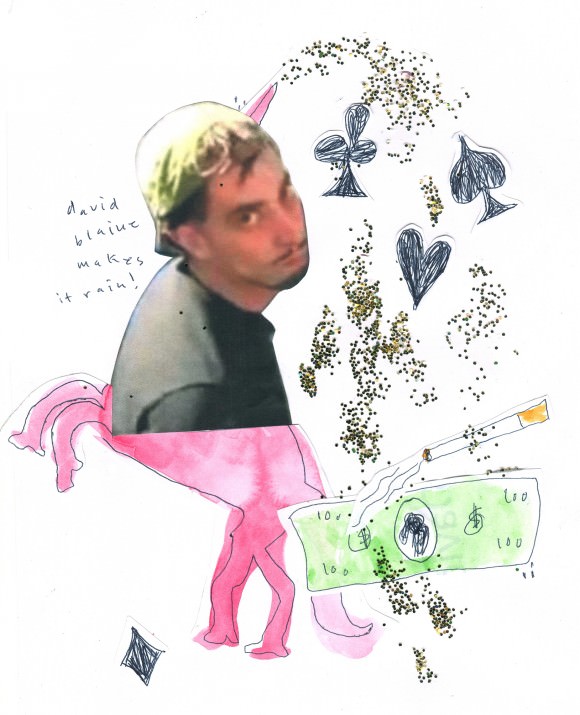 Have you ever seen a dude bite a quarter in half…and then blow it back together again? Well, meet David Blaine:

I know, right? I’m not sure how he does it, but I’m sure you could google it if you wanted to try to repeat this trick at home. I’m also sure that despite being a generally curious person, I will never try to find an explanation. I’d much rather remember that woman’s face—complete and utter awe. It’s probably the same face I made when I saw that trick for the first time. I was eight years old, watching Blaine’s very first TV special from 1997, Street Magic, with my parents. My bug-eyed interest was memorable because I wasn’t even that into magic as a kid. I had never tried to learn a card trick. I never even read fantasy books. I’ve always found the whole realm of sorcery kind of corny. Except in the hands of David Blaine.

I am not saying he is never cheesy! He definitely is, with his monotone “I’m so bored by the real world” speaking voice, vaguely goth vibes, and weirdo obsessions. But the way he turns those obsessions into entertainment, from street tricks to physical feats like holding his breath for an insane amount of time or spouting water and kerosene from his stomach (I’ll come back to these!), makes him the best living illusionist in the world and the only one to win me over, again and again, through every phase of his insane career.

It all started with sleight of hand. In his street tricks, David Blaine (he really has one of those names that sounds better if you say the first and last every time—like, even if I were his friend, I’d probably always call him “David Blaine”) does things like slyly lift someone’s watch as a gag while doing card tricks that casually blow minds. And instead of performing on a big stage with sexy assistants and a top hat, like most people’s idea of a lame magician, he always does his thing directly for the people, usually in a crummy T-shirt and jeans. The reactions from unsuspecting normals on the street are at least half of the show, and most of the charm. Seriously, watch the joy and disbelief on these faces:

When David Blaine really takes it to the realm of the WTF, though, is with his illusions, which might as well be CGI (I don’t think they are, based on those non-actor reactions, but, like I said, I haven’t googled). Here he is burning a hole through a $20 bill and then making the hole instantly disappear. YouTube won’t let me embed that one, but if you click the link, you’ll see a woman, standing in as our witness, go, “That’s impossible.” Yeah. That’s the point.

He can also refill an empty can on the spot:

And turn a homeless man’s cup of coffee into change:

But even if those shticks get old (they don’t, trust me, I’ve been watching them for like 18 years), David Blaine has turned himself into way more than a street magician. Unlike the card or quarter maneuvers, which probably have simple, rational answers, his endurance tests are all about manipulating his actual human body to the extent that it looks like magic, even if it isn’t magic in the most traditional sense.

Over the years, his performance projects have included being buried in clear coffin for a week, freezing himself in a block of ice for almost three days, and hanging out in a see-through cube above London for 44 days with no food at all. (During that last one, people flew hamburgers in front of his face on remote-control helicopters as temptation, as if it weren’t hard enough already.) In a way, these things are more unbelievable than biting a quarter in half or levitating, and they manage to bring up some big questions about mortality and faith (What can the human body really do and for how long? Whyyy?!).

“I look at it all as magic,” Blaine has said of his stunts. “In this day and age, when everything is explained on YouTube, the ultimate goal is to create magic that seems like it is impossible but you can really do it.” Even if you wanted to know the secret behind the trick, you wouldn’t find it—the trick is that you’re not really being tricked at all.

In a TED Talk, Blaine explained some behind-the-scenes stuff, including his lifelong passion for the work of Harry Houdini, escape artist extraordinaire and the godfather of these types of stunts, and how his intense fandom and imitation eventually led him to learn how to hold his breath for 17 minutes. (After sucking on some pure oxygen first, but still. That’s way more than Houdini ever did.) Blaine takes his craft—one that is so often completely silly—so seriously that I can’t help seeing his attention-seeking stunts as a kind of art. It’s beautiful, really.

In this clip from his latest TV special, Blaine figures out how to swallow an insane amount of water and kerosene (a dangerous chemical) and then spit it all back up separately, so he can both start a big fire and put it out. With his stomach and throat. That’s dedication!

It’s just an added bonus that David Blaine also happens to be an absurd celebrity figure who pops up in the strangest places (most recently Kim and Kanye’s wedding). Back in the day, he was BFFs with a young Leonardo DiCaprio, who made a cameo in Street Magic. (“So do people ever think you’re just some freak when you come up and do magic to them?” Leo asked). Here they are, in bathrobes, with Tobey Maguire, because why not. Blaine also dated Fiona Apple, a relationship chronicled beautifully on the Old Loves Tumblr and in magazine articles from that golden era. (“David and I are both completely fucked-up,” she told SPIN in 1997. “We’re the most fucked-up couple I know.”) Also cute:

An hour earlier, after Apple had finished a run-through of “Criminal” for camera placement, Blaine rushed over, kissed her, and lifted her into the air like a swan. “I’m thinking of doing the song from up here,” she said, and then he sort of dropped her, not really letting her fall but definitely letting her go, and she laughed and said, “You asshole.”

So basically he’s like a ’90s alternative version of Forrest Gump, present for all the most important moments (in my pop-culture life, at least).

But all of that is just fluff compared with the years he’s managed to keep me spellbound. He’s one of very few figures (OK, I liked Harry Potter too) with the power to pull me out of my very very literal, reality-based, and some might stubbornly unimaginative existence. “As a magician, I try to show things to people that seem impossible,” Blaine said in that TED Talk. “Magic, whether I’m holding my breath or shuffling a deck of cards, is pretty simple: it’s practice, it’s training”— here he chokes back the tears —“it’s practice, it’s training, and experimenting, while pushing through the pain to be the best that I can be. That’s what magic is to me.” ♦