A song premiere and interview with a musician who dreams of a Backstreet Boys version of Pet Sounds.

I'll Be Your Mirror 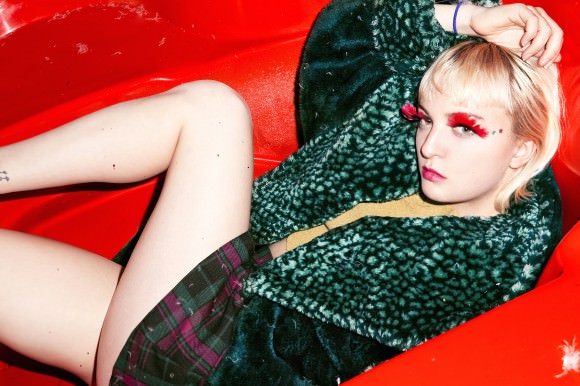 Elizabeth Lowell Boland, who records music under her middle name, creates catchy, glossy synth-pop songs that talk about rape, women’s rights, and empowerment. If you’re curious, listen to the EP she released in February, I Killed Sara V., or her 2012 collaboration with the band Apparatjik, If You Can, Solve This Jumble.

Lowell’s debut solo full-length, We Loved Her Dearly, comes out on September 16, but we’ve got a premiere of the first single, “LGBT,” right HERE AND NOW for your enjoyment.

MELODY LAU: You’re very outspoken about the things you care about, regardless of what others think. Where did that confidence come from?

LOWELL: It definitely didn’t appear overnight. I had spent at least a year or two, maybe even three, listening to other people and trying to accommodate their opinions. I had this epiphany, though, when I was living in London: I was making crappy pop shit and it sucked so much! I was torn, because I believed that I could make money [doing that], and then do whatever I wanted. But at the same time, I was like, Wait, this isn’t even good—this isn’t going to make money! So I decided to make whatever comes out of my brain, and if it doesn’t make money, I don’t care. At least I’ll like it and have something to listen to!

Is it important for you to be in control of the music you write?

It’s more fun to be in control of my own music. There was a time when I used to co-write songs, and I’d walk into a room and feel inferior. I didn’t know a lot of other female songwriters, but it wasn’t even entirely a gender thing—people are also super ageist. I was a new artist without a huge discography, so I was intimidated. Now, when I walk into the room, I feel like I’m the greatest!

Do you have any advice for young people who want to get into music?

Don’t be afraid to educate yourself. Knowledge is power! The most important thing is to know what’s happening at all times: what people are thinking, how to make music, etc.

The fangirl in me needs to know: I heard that you co-wrote a song for the Backstreet Boys once. Is that true?

Yes! I wrote a song about me [“Take Care“] so that Nick Carter would sing it! I try to not be creepy about it. I don’t have a crush on him now, but the child in me wrote that song for him.

You have fulfilled my dream.

I have a dream where I’ll get ahold of the vocal stems from their new album, put it on a reverb, add some guitar and booming drums, and turn it into the Backstreet Boys version of Pet Sounds. They’re just so great at harmonizing.

You must do this!

Melody Lau is a writer who lives in Toronto. She loves her city as much as Drake does. You can find her words in Exclaim! Magazine and on MuchMusic, Pitchfork, and Twitter.