Lily and Madeleine: The Wolf Is Free

A super-sweet new video by one of our favorite sister acts. 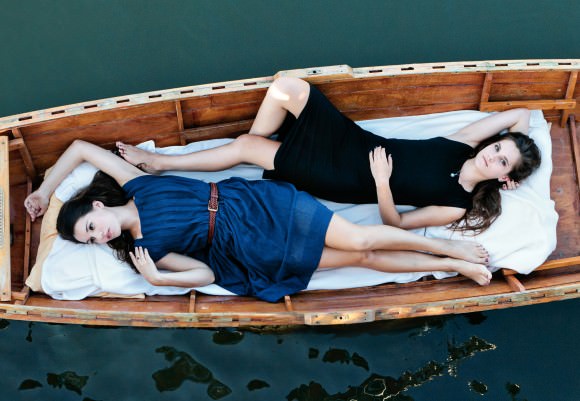 Lily and Madeleine Jurkiewicz are teenage sisters (17 and 19, respectively) from Indianapolis, Indiana, who make gorgeous music together. Their second album, Fumes, comes out October 28 on Sufjan Stevens’s label, Asthmatic Kitty; we’re so happy to premiere the video for its first single, “The Wolf Is Free.”

I recently sat down with the girls to talk about their new album, this new video, and what it’s like to spend ALL YOUR TIME with your sister.

sammy maine: Have you guys had a good summer?

madeleine: Well, we’ve been touring a lot. But August has been kind of a slow month for us, which is nice. We’ve mostly just been working on stuff for the new album and some more music videos.

How was making this video for “The Wolf is Free”?

madeleine: It was great! It was directed by a 21-year-old lady named Laurel Kati Cohen from Bloomington, Indiana, who’s going into her senior year at Northwestern University in Evanston, Illinois. She’s badass and a brilliant director!

Spending so much time together must’ve changed your relationship as sisters.

lily: Yeah, we’re definitely closer. We’ve always hung out together or whatever, but now we’re business partners, so it’s a more serious relationship. But it’s also just, y’know, super fun. We do everything together.

madeleine: Being Lily’s business partner can cause tension, because sometimes we won’t agree on a certain song we should do or what we should wear during a performance or an interview. But it’s nice that we are so close and that we’ve lived our whole lives together, so that we can communicate really well—when we do disagree on something, we can [easily] come to a decision.

Do you still have the typical sisterly fights?

lily: No, not really… [Laughs]

madeleine: I would say so! Lily recently stole one of my T-shirts…

lily: But she stole one of mine!

Is it hard to keep up with your schoolwork when you’re on the road?

lily: It’s kind of hard, but I’m going to take some online classes to finish high school this year. I’m going to graduate online, I guess. Madeleine is just hanging out—she doesn’t have to take any classes!

madeleine: Yeah, I’ve already graduated, so I don’t have to be in school. I’m just taking a break right now. But I’m actually really excited to go back to college. A lot of my friends are moving back this week and next week to start classes again, and I’m a little bit jealous.

Do you often feel like your career sometimes forces you to miss out on stuff like that?

madeleine: Oh, yeah, definitely. I totally feel like I’m missing out even though this adventure that Lily and I are on is super, super cool and we’re learning a lot just through the experiences that we’re…um, experiencing? [Laughs] But, yeah, I do feel like I’m missing out on “college life” and going to parties and making friends and being involved in extracurricular stuff.

lily: Yeah, I feel sort of sad that I won’t be graduating with all my friends. It’s tough to be at home all day and then have periods of time when you’re not home for like three weeks. It’s just weird, and I’m still not quite adjusted to it, but what can you do? I’ll just finish these online classes and go on tour and see what happens.

Let’s talk about your upcoming album, Fumes. What’s this one about for you?

madeleine: This one is more about empowerment—moving on and doing new things and growing up. It’s about taking charge of this stage in our lives.

lily: Instead of being dragged around by it.

madeleine: I think with our first album [Lily & Madeleine, 2013] we were just experimenting with making music as a career, and I was really afraid and felt very self-conscious about it. But I think that we’ve figured out our place in the music industry right now. We’re still learning about how to make music and how to “make it” in the industry, but I feel a lot more confident about our career.

lily: Yeah, our attitudes have shifted between the two albums. This one is more…it’s stronger.

I feel like I have more of a grip on “the real world” than friends my age do. They’re like, “Where shall I go to college?” or “How am I going to pass this English class?” while I’m making money with my sister and trying to have a career and support myself.

madeleine: I’m starting to pay rent and utility bills. Those are big, grown-up things. And Lily and I are signing tax forms and all of that boring crap. I definitely feel like this method of learning—outside the classroom—has really helped us grow up pretty fast.

Is it weird going from two normal teenage girls to doing things like meeting your fans?

madeleine: Yeah, but it’s super nice! We get to meet a lot of different people—I mean, our fan base is pretty diverse. There are lots of elderly men who really like our music, but then lots of really sweet young girls, too, who are inspired by what we do. [The girls] are my favorite people to meet.

Are you inspired by anyone in particular?

lily: I want to call out John Green. I think it’s just so amazing that he’s an author and he went to priest school and he’s just like a normal guy but he has such amazing ideas and such a strong personality and presence in social media and in the world. He has a huge following that he uses to raise money for all of these different charities, and I just think that he’s a great role model for everybody.

madeleine: Also, I would say some of the really awesome female comedians. Tina Fey is one of my idols. I think she is the coolest lady and an utter genius. I often think, when I’m afraid, What would Liz Lemon do? I’ll never be as funny as Liz, but I always try and ask myself what she would do in scary times. Being in this band is definitely scary, but in the best possible way. ♦