The Whole World in Our Hands

The internet has made me into kind of a brat. 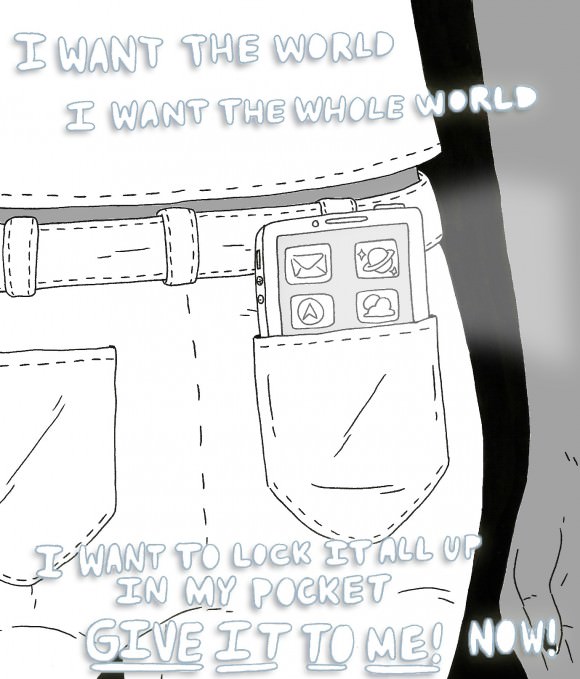 In 3,000 BC, when the ancient Greeks didn’t know something, they had to consult an oracle, someone with a direct line to the gods. In 2014, when I have a question, I consult Google, which isn’t actually an oracle but might as well be. The internet has always been there for me to solve any solvable problem or resolve any nagging uncertainty. I have never had to remember the lyrics to a song, printed out a map before leaving my house, or called a telephone number to find out when a movie’s playing. I can probably count the number of times I’ve had to actually speak to a librarian on one hand.

The idea that someone would even own a hardcover dictionary is baffling to me, as are possessing a physical set of encyclopedias, ordering clothing from a paper catalog, and waiting for a newspaper to be delivered to your door. When an imaginary woman named Siri lives on people’s phones, waiting to define words for them, do mathematical equations, figure out the quickest route to wherever they’re going, remind them who does the voice of Linda Belcher, or find the nearest slice of pizza, why would anyone pay money to clog their bookshelves with soon-to-be-out-of-date lists of words or phone numbers or trivia?

I was born in 1994, so I haven’t really known life without the internet. This has mostly been a positive force in my life: The world wide web has given me access to an embarrassment of information and culture from almost any era, instantaneously. For example, I do this radio show, and at least half of the songs I play are MP3s I’ve ripped from YouTube, which are often recordings ripped from vinyl records from people’s beloved personal collections. Many of them are rarities by bands I love, or work by bands I never would have heard of unless someone had decided to post their stuff on the internet (like the Vels, or this song about a crazy poodle by a band called Sis Q Lint). Pretty much everything I wonder about all day long, I have an answer to in seconds, like the location of that one ice cream shop I went to once ages ago and whose name I couldn’t even recall (Davey’s, on First Avenue, near Eighth Street), or where I might find a copy of the ancient Greek novel Daphnis and Chloe online (there are many PDFs available). In olden times, I would have had to consult, at the very least, a phone book, a map, and a real live librarian to find all that information. Ain’t nobody (me) got time for that.

But having all the information in the world literally at my fingertips has had its downsides. For one thing, it’s made me kind of a brat. I expect access to everything, all the time, and I get frustrated when I don’t get it. Remember when Wikipedia was down and kids were tweeting about how they couldn’t get their homework done? Sadly enough, I kind of related to them. There was that incident when I couldn’t complete some English homework in the school library because the computers wouldn’t let me access CliffsNotes (it was blocked for “games” or something—YEAH, GAMES, OK), and the time a Wikipedia page’s sources were dismal and I struggled to find decent source material for a paper on how super PACs are funded (turns out, kinda shadily). A slow Internet connection makes me want to throw my laptop out the window. I am Veruca Salt in the Wonka factory, except the golden eggs are working Piratebay movie downloads because the new Gregg Araki movie hasn’t come out yet but I want to see it NOW.

Has this ever happened to you? You meet someone new, and you’re excited or maybe just curious about them, so you google them as soon as you get home…and there’s nothing. Which can be frustrating when you really want to know more about them. I’ll be the first to admit that I google the hell out of everyone, whether it’s someone I’m about to work with or I just met somebody and want to scope their Instagram life to judge exactly how intelligent they are by which filters they use (oh my god, KIDDING). But in all seriousness, getting deep into someone’s internet presence before you really know them personally isn’t always the coolest move. The cooler thing to do now is to not even be on the internet. I mean, there’s nothing “wrong” with putting your life online or choosing not to do so, but when a 20-year-old doesn’t turn up a single hit on Google, I feel a complex mix of “Huh?” and “Wha?” and “How?!” and “Pics or it didn’t happen” (except in this case I guess it’s like “…or you don’t exist”).

I’m so used to everyone putting their whole entire lives online, myself included. Oversharing is just a silly word to me, at least when it comes to personal information. But there is one place online that I sometimes wish people would hold back a little. I write stuff on the internet (a weird thing to have to tell you in this context), and it often feels as though people who read it feel entitled to say whatever they want to me, in comments or Tumblr Asks or Twitter @s or whatever. I get rude, inappropriate, and just plain asshole-y questions and comments all the time, and when I don’t respond to them, they just get worse.

These interactions remind me of when one of my favorite writers, Kate Zambreno, got into a disagreement (about James Franco!) on Facebook with another writer. Having neither the time nor the desire to really engage in an argument ABOUT JAMES FRANCO, Kate simply unfriended the other writer and went on with her day. The guy took it VERY personally and wrote a mean piece about Kate on a literary blog, in which he said that he had “a right” to have this conversation with her. Why he felt entitled to such a thing from another human being, I don’t fully comprehend, but I think it has something to do with how easy it’s been for all of us, all our lives, to say anything we want, to anyone, anytime, and our comments (and their reponses) will be on full display for all to see, presumably forever and ever. But there’s a difference between insightful debate and rude, invasive questioning. The latter is a good enough reason to cut people off. People can complain about you on the internet as much as they please, but you don’t have to listen to them. Just because you exist in a public space doesn’t mean everyone gets whatever little piece of you they want. Block away, it’s OK!

There’s been a lot of talk lately about trigger warnings, which were invented to help people with PTSD avoid reading or watching things that might take them to a bad place psychologically; in the past five years or so they’ve most often been used to warn people about potentially disturbing content in an article or video online: graphic descriptions of sexual assault or self-harm, for example. But something weird has happened recently, where not only do we want to be told in advance about stuff that might remind us of traumatic events or self-destructive experiences, we want to be forewarned about everything: Is the word rape even mentioned in this article? Does anyone have a mental illness? Is there a homophobic character? Do anyone’s parents get divorced? Getting whatever we want online is no longer enough—now we want it exactly how we want it. College students have even started asking for trigger warnings on their syllabi. We feel entitled to be protected from whatever it is we don’t want to see or hear or read about. I’m not mocking any of these concerns, but at some point, everything in the world will have to be tagged with a warning, which will make such warnings utterly meaningless.

Sometimes the internet is like a comfy couch where everything you might be into (bagels delivered right to your door, the new season of Orange Is the New Black) is easily accessed. But the rest of the world isn’t always so comfy. We learn this when we can’t find what we need online and have to venture out into that world, where “I’m feeling lucky” is just a personal feeling and not a command. ♦