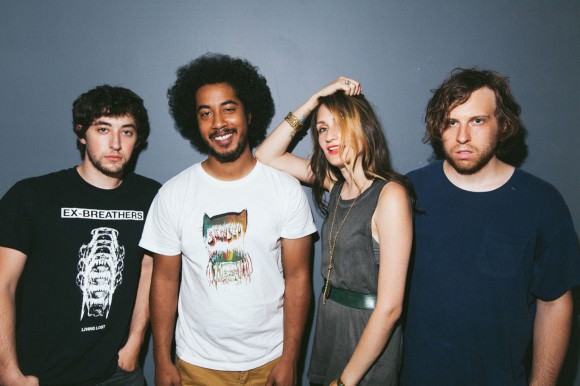 When we told Sadie Dupuis, who plays guitar with the Massachusetts band Speedy Ortiz, that this month’s theme is The Great Unknown, she immediately thought about Sibylle Baier, a German woman who recorded 14 beautiful folk songs in the early ’70s, then did nothing with them. About 30 years later, her son found those recordings and sent one to J Mascis of Dinosaur Jr., and almost 10 years after that, Speedy Ortiz covered one of them for us! That song, “Lost Something in the Hills,” “was a lot harder to learn and play than we thought it was going to be!” says Dupuis. To get into the tune’s spooky mood, Speedy O recorded it in the middle of the night (with some help from their friend Ben Scherer, from Palehound), at the summer camp Dupuis attended as a child and taught music at as a young adult.

Coming off a lengthy tour, Dupuis has been taking some time to do the things that she loves. She shared some of those with us.

BRITTANY: I love this song so much! What made you choose to cover it?

SADIE DUPUIS: Well, it’s a Sibylle Baier song, and the first time I heard it, it really stayed with me. It’s got this really honest sadness to it. It’s about losing yourself in the woods, but it takes that idea in two very different directions: first, that the woods are the only thing that can restore this sadness, and, second, that this sadness is unbearable and you need to be exploring beyond the hills in order to get over feeling miserable. When we saw this month’s theme, “Lost Something in the Hills” was the first song that I thought of. It really encompasses the different feelings of exploring something that you don’t know, whether that’s giving yourself over to something or just going beyond your comforts to get rid of the horrible feelings that you’ve been holding on to.

When’s the last time you felt like you were lost or exploring the unknown?

We basically just quit our jobs in December to go on tour for seven months. I would be home for maybe two days at a time, every three to six weeks. I just felt very ungrounded and lost within myself. I had no idea who I was or what was even happening to me anymore. Things became very tense. The only thing that rooted me was showing up where we were told and playing shows. But now I’m home, and I’m figuring out what I like to do so that I can try to make that happen a little more next time we have to be away from home for so long.

What kinds of things have you been doing?

Well, I’m starting to get into exercise for the first time since I was a kid. Whether it’s running or yoga, it’s nice to do something that reminds you what it feels like to have a body. Sitting in a van all day and then trying to play these really personal songs—it was a little alienating. I’m also trying to be in better touch with my friends and my family and reading books for fun. I’m just remembering the stuff that I like to do and making sure I do it!

You also just released “Bigger Party,” which I can’t stop listening to! It feels pretty different from the songs on your last EP, Real Hair, which was a more introspective joint. How would you describe this new Speedy Ortiz sound?

[“Bigger Party”] is actually a really old song! It was just really silly, so we never felt comfortable using it for anything. But maybe after being on tour for so long and figuring out how we actually feel about everything, it’s starting to feel OK to be a little bit silly. Some of [our new songs] are about that kind of thing—learning to be comfortable with yourself, even when you’re in front of a lot of people that you’re not around every day.

What have you been listening to lately?

The Carter Family nonstop! June Carter is my favorite person. She’s got a beautiful voice, but she is totally comfortable being silly. All of her songs are really hysterical and also really weird. I think Kelis—and this may be the first time June Carter has been compared to Kelis—has a similar thing: She’s a really brilliant songwriter, but she’s not afraid to be silly—there will be a dark chorus coming out of a really goofy song about wanting to be blindfolded. Those are the two songwriters I’ve been listening to—my bandmates would probably say ad nauseam, but I wouldn’t, because I would happily listen to them all day long!

What kind of music do you listen to when you need to clear your mind and do some deep thinking?

I actually don’t think music helps me clear my head! It intensifies whatever it is that I’m feeling. But I’ve been swimming every day for an hour at least, and I’m reminded of this Kathy Acker essay where she talks about how hard it is to translate into language the feeling that she gets from weightlifting. I think part of what is really nice about swimming is that I’m not thinking about a million things at once. I’m thinking about breathing, trying to be calm, being at ease with my own brain, instead of trying to stifle those thoughts by doing whatever else. That doesn’t really answer your question, but I don’t listen to any music to calm down! I listen to Kelis to get turned up, and the Carter Family also to get turned up!

I get that! I mean, you play music for a living, so to clear your mind it makes sense to go someplace else.

Yeah, our job is to see bands every single day, which is great because I love seeing bands, but I guess I’m overdosing on that. Now, when I come home, all I want is to read in silence and exercise or binge-watch television, which I did all day yesterday. It was a very nice day!

What did you watch?

Season one of Fargo. It was great! And, actually, the Carter Family’s music is in it, so that felt serendipitous.

It’s cool that recording this song brought you back to your old summer camp. When you taught music there, did you give the campers any songwriting tips?

It’s funny—I’ve been trying to write at least one song every day, and to do that I’ve actually been following the format of the class I used to teach: I’ll take a theme or an idea and give myself an hour to write whatever I come up with on it. That was what my class was about. We would listen to music that we really loved and identify what elements of it were appealing to us. Is it the guitar in a certain place, or is it the way that the drums sound, or is it a specific line, and why is that line so effective? Then we would take one of those elements from the song and try to do that in their own song. Basically the class was [my students] thinking about what they like and what they didn’t like and trying to get comfortable with it. Now I’m teaching myself to do that again. ♦