The singer talks about her early struggles to fit in and shares her new single, which is (not coincidentally) about not caring what other people think. 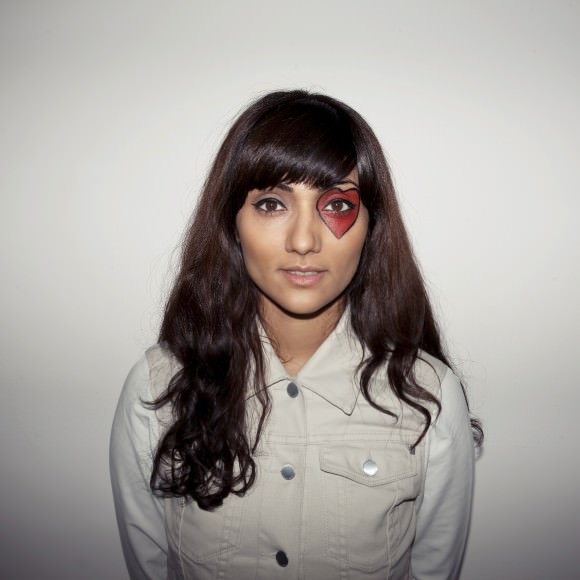 Samsaya is all heart. From the signature one she paints over her eye before every show to symbolize positivity and openness, to the genuine friendliness she shows her fans, or “keepers,” as she calls them (“A keeper is an inspirational being—someone who always seeks the truth and good in the worst conditions”)—it’s all love in her world. Her enthusiasm for enjoying every moment is as infectious as the catchy songs on her self-titled EP, out on July 15. Samsaya mixes modern pop with traditional Indian sounds Samsaya heard at home as a kid—she was born in India but grew up in Norway, where she struggled, she says, to fit in. Her lyrics are about that and other struggles: “Stereotype” is about staying true to yourself, “Good With the Bad” is about truly feeling everything life has to offer, and the song we’re premiering here today, “Bombay Calling,” is about not giving a fuck what other people think.

It was a real pleasure to interview Samsaya about her new record, and how she and music became BFFs—she is one of the most optimistic people I’ve ever met.

BIANCA: What do you love most about making music for a living?

SAMSAYA: I wake up thinking about that every day. I’m in such a wonderful, crazy world right now, I feel like I’m in Oz. Next week I’m actually going to Kansas to shoot a video, and I’ve been thinking, Well, I’m going to Kansas, so maybe this really is Oz! [Laughs] I feel like I made this place for myself when I was really young. I didn’t get to do what the other kids were doing, so I made my own world. I used music to take out my frustrations and express my feelings. So now, my imagination has turned into my reality! That’s what I love the most about it.

Why didn’t you get to do what other kids were doing?

It was just growing up in Norway and my parents being Indian. I would tell them that it was [the norm in that] culture to hang out at the shopping mall, but my parents didn’t think that was right. [I wanted to go to] places like the youth center, where they’d have all these music things going on, but they always saw that as more like a club. I was 13 or 14, and they didn’t think those were the kinds of things I should use my time for. That’s when I started making my own music in my room. I loved music and was listening to a lot of it, but I don’t think I would have tried to make it myself if I didn’t have that struggle at an early age. I had to figure out ways I could do it on my own.

Yeah, recording. I would use a tape recorder. I would take the instrumental part out of a song I liked and sing on top of it. I would perform for my sisters, or for my friends when they were visiting, and try to get them to be part of a band. [Laughs] My room became my own little youth center! I already had that vision, which made it easier for me to do what I wanted when I got older. I was already writing stuff; it was so natural to me. I feel like music was one of my first real best friends.

How did you find that best friend in the first place?

Between the ages of 11 and 14 I was going through that stage where I felt like I didn’t fit in—I didn’t fit in at home and I didn’t fit in at school or with other people, either. I remember lying to my friends because I didn’t want them to know that my parents wouldn’t let me do stuff like go to the youth center. I didn’t want the other kids to think my parents were bad people, because they weren’t—they just didn’t understand Norwegian youth culture. And I felt so embarrassed that I couldn’t do what the other kids could do. My parents wanted me to hang out with mostly other Indian kids, but I liked my Norwegian friends. I was very social, but I was afraid to really be myself with anybody. But with music, I felt like I could be who I was. I could sing things that I didn’t dare to say just talking. I put all those things into my lyrics. Music became my safe house.

Music, to me, is the heart; it’s the strongest muscle we have, and the most beautiful way of seeing life and people. I don’t ever want to forget that. I paint the heart on my face before performances now as a reminder. I do it as a ritual before I get up on stage. It takes 15 minutes to draw it. Sometimes it’s little, sometimes it’s big, sometimes it’s shaky, but the whole idea is to remind myself why I’m doing this, and that I don’t need anyone else’s approval. Focusing on that heart has put new life into my music. I feel like I’m back in my imagination again, and I love being there! ♦