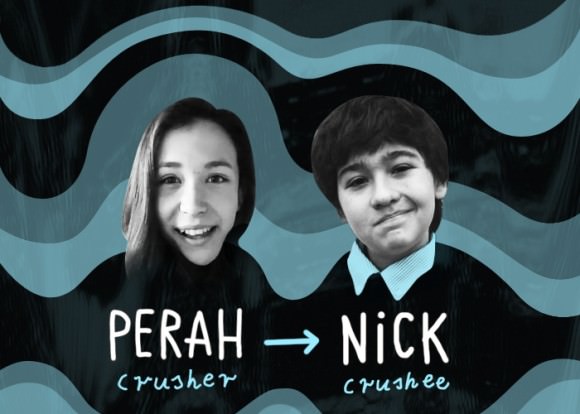 Perah and Nick, both 15, couldn’t stop gushing about each other when we talked to them on the phone for this month’s Friend Crush. They share lots of other great loves, too, one of which is educating each other about important topics like feminism, the best Slurpee flavor, and the proper pronunciation of the word banana. They taught US that they’re basically the coolest people on this planet, and we bet you’ll think so too.

My name is Perah, I am 14 years old, and I live in a suburban town near Los Angeles. I am (majorly [platonically]) crushing on my best friend Nick! He’s probably the single most lovable person I have ever known, prone to generously complimenting people he’s just met, spontaneously bursting into song, and using gigantic hand gestures. Pretty much everyone loves him (which is completely ridiculous, because no one is universally loved, BUT IT’S JUST NOT POSSIBLE NOT TO LIKE HIM).

Even though he’s mostly a loud goofball, he totally gets the more serious stuff. He’s willing to talk about nearly anything, nearly any time. Nick is also my only friend with whom I talk about feminism in all of its great confusing blurry glory at length (on a regular basis, at odd hours) and I appreciate him so so so much more for that.

I love that he always makes me feel safe in my own skin, and he always gives the best advice when I don’t. I would love to say thanks for how wonderful he’s been to me. Honestly, I could totally fangirl over him all day long.

Nick and I hung out yesterday and today, and I was really, really happy about that because we don’t get to see each other very often. We try to text a lot. He goes to a boy’s school that’s very far away. Apparently, it involves a train and a bus to get there? He started going there last year, so this is our first year apart. It was kind of rough at the beginning. I was super bummed out. But it’s OK now!

Can you tell me the story of how this holy alliance formed?

In seventh grade, there was this bake sale/movie thing held by the Service Club, and he was selling, I think, cupcakes? One of our friends introduced me, and I remember thinking, “Why don’t I know this kid?” Because we went to a pretty small school, so I was like, “Why don’t I know this kid…I feel so bad!” And then the next time we met, we were in the same P.E. class. Today, he said something about someone, where there just wasn’t a “click” [between them], and as soon as we met the second time, there was a CLICK, and we were friends.

We were in P.E. together, and every time we talked, we’d be like, “Hey, this is a really great conversation. Like, my sides are hurting from laughing so much.” But we never really hung out until eighth grade, and then we got really, really, really close, because I think we both came to the realization that we thought in really similar ways. We both have the habit of dropping really serious stuff in conversation, like, “Oh, yeah, whatever…” and I think most people don’t really catch that, but he’s always caught it with me. And I really appreciate that with him, and I think most of the time, I can tell [with him, too]. Well, I hope I can tell!

Do you remember one of the first times that happened, and what he noticed that you were like, “Whoa, you really picked up on that.”

It was in eighth grade. There was this guy who was one of my best friends, and we really liked each other, but he was kind of butthurt because he thought I was leading him on by being friends with him, when I was really like, “Nooooo! I’m a hermit crab! I can’t…feelings…bad!!” I think Nick was the first person who saw how much that really affected me. It made me really sad. It wasn’t even in person—Nick caught it over gchat! I don’t remember what he said—it was in a group chat, and I kind of erased that whole scenario. But, from what Nick said, I was like, “OK, you’re cool, I’m going to stick with you.”

I’m sorry that that happened, but I’m glad that Nick was there for you, and that you were like, “Huh, this is a really quality person.” You mentioned in your letter that you and Nick discuss feminism a lot.

Yeah! I like to think I introduced him to not only, “Oh, yeah, equality,” but actually seeking out feminist media. It was over Facebook. I sent him to a link to an essay about stereotypes that women face, and he saw it and was like, “Ugh, what is this, some preachiness?” And I was like, “No! It’s a really good blog post!” And he was like, “A blog post?” Which is really ironic, because now he’s one of our friends who calls out our other friends, like, “Hey, that’s really not a cool thing to say.” He also runs this super-cool Tumblr. I’m on it too—we both blog every funny thing that we see, but his is really consistent.

What was the essay you introduced him to about?

I don’t remember! But nowadays, we talk about slut-shaming and safe-sex practices and education, especially in schools.

That’s awesome. Do you guys have a lot of other people you talk about this stuff with?

Not really. We have one mutual friend who’s really fun to talk to, but mostly it’ll be me getting really worked up about something in the middle of the night, and I can’t sleep, so I’ll text Nick, like, a really angry, long, all-caps text, and then he’ll respond, and then we talk about it until we fall asleep.

That’s a really cool outlet to have in a friend. What has Nick introduced you to?

Yesterday, we watched Silence of the Lambs, AND! I had my first Slurpee yesterday, which he made me get!

YOUR FIRST ONE EVER?!

Yeah! It was really, really good. Actually, the whole experience was great because, (a) Slurpee, which, oh my god, so good, but (b) the lady, the cashier, behind the counter was like, “Oh, how old are you guys?” And I was like, “Oh, uh, 15,” because we’re 15. [Both laugh] She told me how much the Slurpee was and I was like, “Oh! Nick! You lied to me!” I was kind of ribbing him, because he had told me it was a lot cheaper than it was. She just started laughing and said, “It seems like you guys are such good friends!” And it was like, “[indescribable growl/pterodactyl noise of pure affection and bliss].”

Well, I think it’s pretty obvious that, even when you’re not writing an email that’s specifically about how much you love each other to Friend Crush, you guys are incredibly close. But wait! Back to the Slurpee! This is very important! How did it compare to your expectations?

It WAY exceeded my expectations. I got lemonade with Coca-Cola on top this time.

That’s a very daring combination for someone who’s never had a Slurpee before!

Well, I was going for lemonade, and he was like, “NO, COCA-COLA, YOU HAVE TO GET COCA-COLA, IT’S A CLASSIC.” It was kind of like an Arnold Palmer!