Not Just a Game 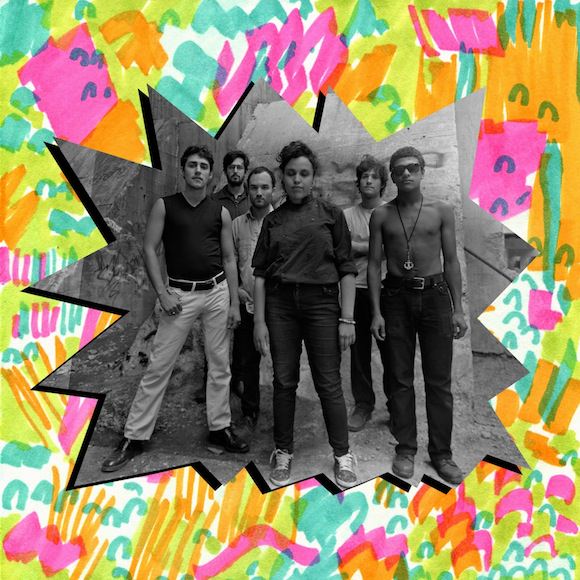 In a punk scene that can sometimes seem stale and beholden to trends that have been regurgitating themselves for decades, Providence, Rhode Island’s Downtown Boys are a beam of radical energy. Their rhythmic guitars, confrontational and urgent vocals, and No-Wave saxophone could be compared to forebears like X-Ray Spex or Essential Logic, but Downtown Boys are more than a postpunk retread. They push themselves to keep growing artistically and politically, and they refuse to be categorized (as evidenced by this interview, which Rookie’s own Suzy X. did with them earlier this month).

I chatted with Downtown Boys’ Victoria Ruiz and Joey DeFrancesco (the band also includes Norlan Olivo, Dan Schleifer, Emmett Fitzgerald, and Will Cioffi) over email about how their politics arise from their lives and needs, the exhaustion that comes with staying vigilant in a screwed-up society, and the band’s recent tour with EMA. Downtown Boys will keep touring the U.S. through the summer, and we are so excited that they paused to contribute this month’s theme song, “Kids Are United,” their cover of the punk classic “If the Kids Are United.” —Jessica Skolnik

JESSICA SKOLNIK: The energy in your music, including “Kids Are United,” is really notable and palpable and infectious. Where do you get that energy from?

VICTORIA RUIZ: The energy comes from the power of the people. To think that even one person is going to listen makes it all necessary and worth it. The energy breaks down the void between us and the audience and get us on that level where we meet each other in space, time, and togetherness.

One of the things that draws people to Downtown Boys is your involvement in labor justice and organizing. How did politics become such an integral part of your music?

VICTORIA: It has never been a choice to wear my politics on my sleeve, but it is so much a part of every experience I can think of. Our only choice is to be political with our songs. I grew up in a Chicana single-parent household. Learning about my Grandma, a farm worker who experienced firsthand the contradiction of picking food but not having enough to eat, always made me think of how weird it was that my mom, a college graduate, and I were able to have such different lives than hers. I remember [my Grandma telling me] how she realized “the importance of education,” and “wanting to have a better life.” It came directly out of the hunger for change. That will always inspire me.

JOEY DEFRANCESCO: I don’t what else we’d write songs about. Our art is necessarily a part of our political work and vice versa. Victoria and I met while we were working at the Renaissance Providence hotel. She was in the call center, and I was in room service. They treated us like garbage there—and other employees to this day, which is why the workers called for a boycott—and why we became deeply involved in a campaign to organize a union. We’re still involved in the campaigns to win justice at other hotels and workplaces in Providence.

How do you take care of yourselves when you’re fighting so hard?

VICTORIA: Sometimes people ask, “Don’t you get sad worrying about this stuff all the time?” and it upsets me because it is negative and absolves the person of the responsibility of realizing that we all have to think about these things. I work through the exhaustion by loving and taking joy in the people who are fighting, too. Sometimes I don’t get much sleep, but I’m not tired because I’m working in a community. We need each other more than we need ourselves, and this is how I push through. I also take care of myself by always being inspired, whether [that means seeking out] a show, a poem, meditation, a good meal, or someone to talk to.

JOEY: I think the community and solidarity we build by talking about and acting on these issues is what empowers us to continue. By taking our lives seriously and fighting and yelling, we create glimpses of a more meaningful world.

What advice would you give to people just entering the workforce?

VICTORIA: I think it is important to remember our power and how much we can and do exist outside of capitalism. Most jobs are part of a structure that is reliant on greed and money, but if we get together, we can push back. I work with a lot of teens of color who are artists and also entering the workforce. [My advice is to] not get down, to keep making stuff, and to make stuff about anger, joy—everything. Also if you are being mistreated in any way, talk to someone! Talk to me! Don’t be silent about it. We all deserve respect.

JOEY: Don’t let anyone mistreat you, don’t settle, and don’t go it alone. We’ve been trained to have this attitude of “At least I have a job” or “It’s not as bad as it could be” or “It’s just a job.” These are the traps employers set for us. Never be satisfied. The second you stop thinking you deserve more is the second they start taking more from you. If you’re being taken advantage of, get a bunch of coworkers together and demand a meeting with your boss to resolve the issue. If they don’t give you a meeting, organize more coworkers and corner [your boss] in their office and make them listen. If they still don’t listen, organize a picket line. Call the Department of Labor together. Call a local workers’ center or union office. Or like Victoria said, email us and we’ll talk about it. Seriously—we’re at [email protected] and we respond to every message. Don’t stay silent.

Any words of wisdom for someone who always wanted to get on stage but was too afraid to try?

VICTORIA: Words of wisdom are tough, but I would say it is not about how good you are at an instrument or at singing, it is about how badly you want to do it. Joey and I often don’t know what we’re doing, but we care about it so much. So go, go, go for it! Anything good did not come from just a skill. Classism tries to make us believe that lots of expensive music lessons or an expensive university education somehow breaks our fear by [giving us] skills. That is a lie. Power can come from the connection between fear and longing. We long for justice and for art, and so badly that it helps us confront our fear around it. The ideas that come out of longing—whether it’s to make music, to tell someone something important, or to take some kind of action—those ideas are our weapons against alienation.

JOEY: I think the most inspiring thing can often be to hear how clueless we all secretly are. Like when we started Malportado Kids [Victoria and Joey’s electronic side project], neither of us had ever made electronic music before. We were just copying and pasting things into GarageBand and eyeballing them to get the beats lined up. It was really time consuming. But we kept doing it and somehow learned more. After our performances in either band, we often say to each other, “Ha, fooled them again!” It’s amazing that it works every time. There’s no secret. You just have to start.

How was the tour you just finished with EMA?

VICTORIA: It was really special. We were given a good amount of economic resources and food, and then our friends and friends of friends really came out of the cut to provide us with shelter, laughs, experiences, knowledge, and fire. It was so awesome. There were often people of color who would come to the front during our song “Monstro,” which has a theme about being brown and being smart. That would just make me want to cry out of love, struggle, and solidarity. I think we grew as a band. I feel a lot stronger as a musician. And Erika [Anderson] from EMA was really supportive! I would do it again in a heartbeat.

What’s next for Downtown Boys?

JOEY: We’re about to record a new, longer record. Details on this soon, I hope! We’re also excited to do our first West Coast and Southern tours in July.

VICTORIA: Whatever the people decide is next! We really wanna get deeper and deeper into that brown, queer, angry-and-ready [spirit], and hopefully change the colonized United States of America and beyond! ♦

Jessica Skolnik is a freelance writer and organizer in Chicago, currently working behind the counter at a record store while they start a nonprofit accessible performance space called Pure Joy. You can follow them on Tumblr and Twitter.