This week, we’re equally crushed out on Morrissey, Rihanna, and a new movie from Sweden.

Sunday Comic: Be Your Own Superhero 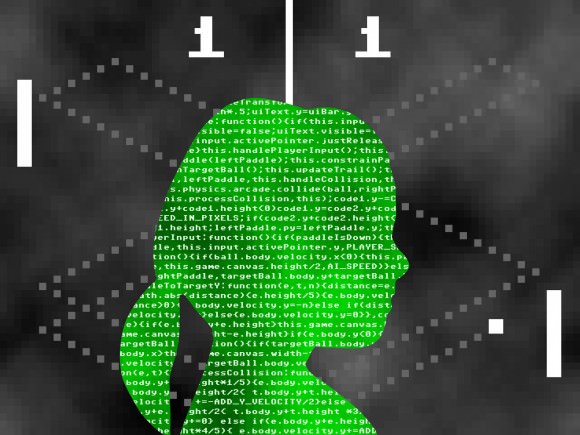 Illustration by Pippin Barr for the New York Times.

I loved this New York Times article by Nitasha Tiku about how to get young women into coding. Developers and research scientists who teach coding are starting to shift the focus of their classes from “learn how to code” to “figure out your dream idea, then code it,” using video games and websites as their examples. Tiku’s interviews with Rebecca Garcia of CoderDojo NYC and Kimberly Bryant of Black Girls Code unpack and attempt to answer a tough question in tech: There’s no doubt that girls want to build things, so why aren’t there more of us in STEM fields?

Imagine if you had a phone application that could control rude, day-ruining boys? The forthcoming Disney Channel movie Zapped imagines what that app would be like, and, oh god, it looks so good. It stars Zendaya as Zoey Stevens, a 16-year-old girl whose phone, after a wacky accident, can make boys do anything. Would this be dangerous in real life? Probably. But let’s just forget that for a second and indulge in a fantasy where we can make loudmouthed kids shut up with only the touch of a finger.

My favorite fictional second-wave feminists, Toni and Candace from Portlandia, had an IRL debate with two gender studies professors, Jack Halberstam (USC) and Juliet Williams (UCLA), at the Last Bookstore in Los Angeles this week, and it’s hilarious/amazing/perfect.
Shriya

Also this week, Rihanna was honored with the Style Icon Award at the CFDA Fashion Awards. (Just in case: You can see her breasts in this video). Her excellent outfit comprised an incredible 1920s-inspired translucent fishnet gown, a head wrap made with over 230,000 Swarovski crystals, and a fur wrap. She looked like the queen of Sparkly Sexy Flapper Mountain! And, as if this look wasn’t enough to make the world see her as royalty, her acceptance speech revealed some wonderful insights about her relationship with fashion. She called fashion her “defense mechanism,” and discussed how it made her feel more confident as a young person—and still does today. I can see how that might work—who could mess with this form-fitting batwing jumpsuit, or this “Fear” stole? 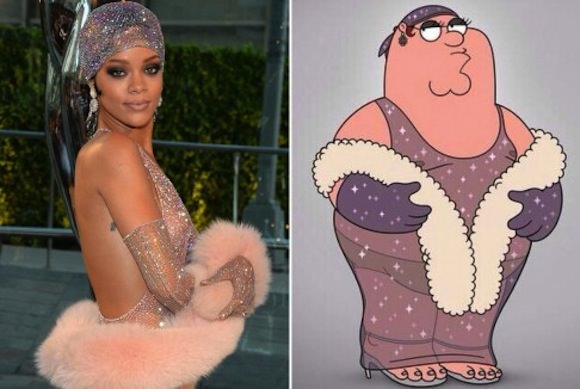 Photo and illustration via KISS FM.

The next day, Rihanna made her Twitter avatar a picture of Peter from Family Guy wearing her gown, reminding us that she’s a badass gal who doesn’t take herself too seriously. Hell yes, RiRi.
Rose 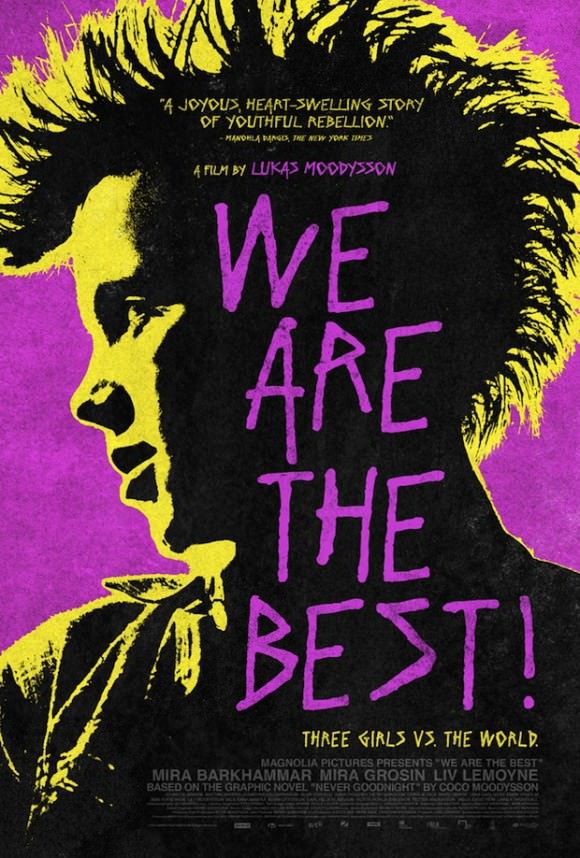 The poster for We Are the Best!

I just saw the movie We Are The Best! and, let me tell you, it totally hits the sweet spot. It’s set in 1982 Stockholm, Sweden, where two 13-year-old best friends decide to start a punk band to express their righteous anger about the world, and enlist a guitar-playing goody-two-shoes to join their crew.

The movie isn’t so much about music as it is about making your own adventures, and how, as We Are the Best!‘s director, Lucas Moodysson, says in this great Pitchfork interview, having “one friend is actually enough sometimes. But two friends? That is a fantastic thing.” Moodyson also gets into why he’s drawn to telling stories about misfit teenagers: “I don’t want to be a teenager—but I’m trying to protect that person inside of me who is open to things, and looking at things, and responding immediately and actively. A lot of grown-up people lose that.” That reminded me of something our bosslady wrote in her Forever Editor’s Letter: “One way to avoid killing your heart is to decide that you will spend your whole life growing up.”
Amy Rose 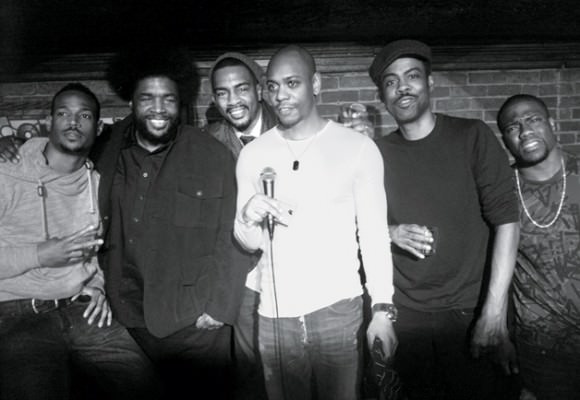 This account of a 2013 surprise performance by Dave Chappelle at the Comedy Cellar in New York City—as remembered by Chris Rock, Questlove, and the man himself, among others—reminded me YET AGAIN why Chappelle is such a king. I suggest grinning through it, then backing it up with this entirely amazing and tear-inducing Believer article about Chappelle’s life, work, politics, and refusal to compromise his integrity. KING, I tell you!
Stephanie 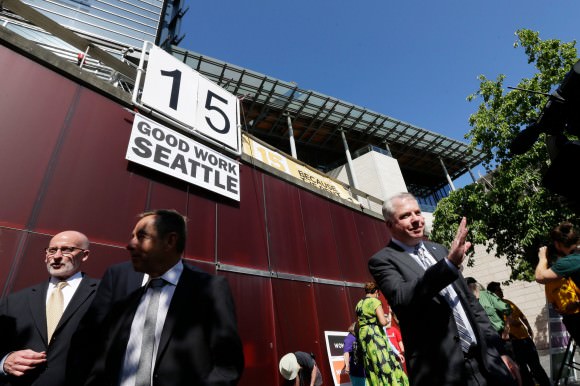 I’m very proud of my city right now! Seattle has officially approved a $15 minimum wage, which is more than double the national minimum! This is huge, as almost 14 percent of Seattle residents currently live below the poverty line, and 24 percent earn $15 an hour or less. Here’s a chart explaining Seattle’s new wage increase, which will change a lot of lives for the better. I hope other cities will follow my city’s example!

Though there was a lot to celebrate in Seattle this week, there was also a major tragedy here. On Thursday afternoon, a shooting took place at Seattle Pacific University. One person was killed and two others were wounded. Many more could have been injured, but some brave students and faculty members were able to restrain the shooter until police arrived. It’s very, very sad that gun violence is still so persistent, and so often deadly, in our country. These links that we posted after the Newtown tragedy in 2012 might be worth revisiting. My heart goes out to SPU and its community.
Julianne 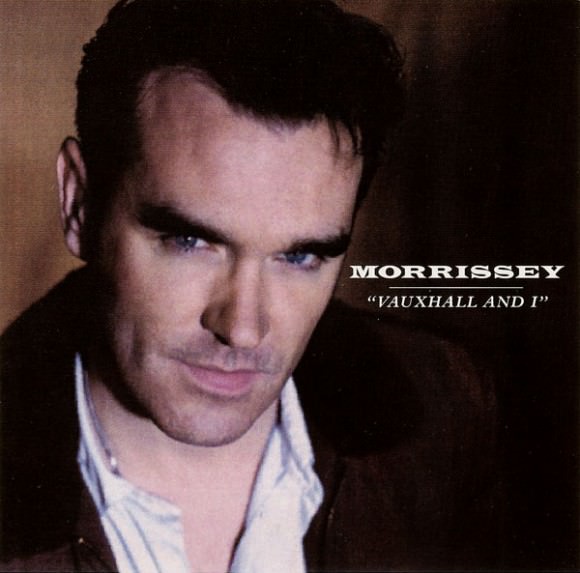 Our own Amy Rose wrote a loving paean to Vauxhall and I, the 20-year-old album by her one and only Morrissey (whom she has also interviewed right here on Rookie), for Rolling Stone. It embodies everything we love about ARS: elegant language, incisive analysis, and fierce passion. To wit:

As midlife crises go, Vauxhall is an elegant one: Morrissey’s vulnerabilities had become more finely tuned. He finally found tangible antagonists to blame for his misery (record-label ogres, the press, the rest of the usual wounded-star coterie of villains), and was eager to lay into them. The predominant emotion on the album? Weariness. Instead of kowtowing to pop ideals in an attempt to redeem his stature, he proffers the gorgeously fed-up “Why Don’t You Find Out for Yourself,” which is essentially a kiss-off to the entire industry-vulture species. He refuses to temper the exhaustion that comes with being misunderstood on “Now My Heart Is Full,” singing, “I’m tired again, I tried again / And now my heart is full / And I just can’t explain, so I won’t even try to.” And god knows how he’d tried, over the course of the 17 years he’d been making himself into music.