An evening of laughter, tears, and freaky coincidences. 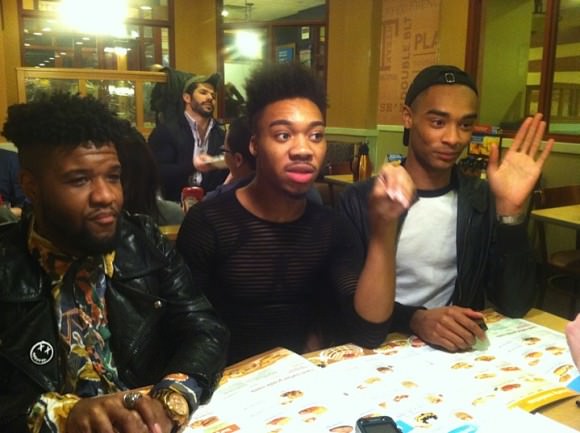 amy rose Where are you guys coming from?

dominick It was OK.

derek It was good!

anaheed What makes the difference between a good night and an OK night?

dominick To be honest, it really depends on who you’re with.

anaheed [To Derek and John] I don’t know if you guys noticed, but Dominick just sort of dissed you, because he was like, “It was just OK tonight at Boiler Room,” and when I asked what makes it OK versus a good night, he goes, “It depends on who you’re with.”

dominick But I only go there with them!

john This was my first time!

derek It was John’s first time, and John’s great, so it was a good night.

dominick Ah! So what am I?

derek No, I’m just saying it’s usually just us, but John adds to us!

dominick Yeah, it’s usually just us and everyone thinks we’re a couple, but we’re very much not. We’re like siblings if anything.

amy rose How do you guys know each other?

amy rose How did that happen?

dominick It was probably through this girl called Bleed Babe.

john Bleed underscore babe. She’s like Twitter famous—I don’t fucking know. She’s like a really good friend of mine, but we haven’t met in real life.

anaheed So you guys were both following her and responding to stuff of hers and then you saw each other’s tweets?

dominick I don’t know. It was probably like some really corny joke that we both thought was funny—

john And then we started tweeting at each other.

anaheed And how do you guys know Derek?

anaheed What are your Twitter handles? Can we put them in the article?

john You can if you want.

dominick Mine is so dumb!

anaheed What does that mean? Is it Egyptian?

derek [Squeals] Yeah! Exactly! It’s like “the Tut,” but I wanted the the to be fancy, so I put it as zhe.

anaheed Do you relate with King Tut?

derek It’s a really long story of how you can be on social networks at different points in your life and you could possibly delete [a profile] and then return—so it felt like a reincarnation.

anaheed ’Cause you had been on Twitter before under a different name?

derek Yeah. And then some foolishness happened, so then like the second one…

amy rose Wait, what happened? You can’t gloss over that!

derek Well, I’m an artist, so, like, I’m very expressive. But I was younger, so I was, like, using my body for art…

derek But I guess it was “suggestive” to some people, so that was a problem.

derek So then I changed it to zhetut.

dominick OK, it’s algeba—like algebra but without the R. In “1+1,” Beyoncé mispronounces algebra that way: She goes, “algeba.”

amy rose How’d you guys decide to come to IHOP?

dominick We come here every time we go out!

derek I’m annoying because I do, I love IHOP.

john Listen to this: For his 20th birthday, he wants to go to IHOP!

derek Yeah, my birthday’s next week.

derek Thank you. I wanna go to IHOP, and everybody’s like, “What?”

derek [Squealing] It’s my birthday, though!

amy rose Do you think they’ll put a candle in pancakes for you?

derek Could you imagine? I would cry!

amy rose So what happened at the Boiler Room?

john We got some drinks there, and then this guy with dreads was like, “You’re gorgeous,” and he kissed my hand.

anaheed Was he trying to bring a third into their—

dominick I don’t think he was.

anaheed But what else could that have been? Why else would he kiss your hand and then immediately mention his husband?

john I don’t know! It was the weirdest thing.

derek So then Dom was getting super talkative with that guy, and I felt like the husband wasn’t enjoying it as much, so I was like, “It’s time to go.”