An evening of laughter, tears, and freaky coincidences.

In what has become an annual tradition on this here website, Anaheed, Amy Rose, Brittany, and Jenny camped out at the International House of Pancakes for an entire night and interviewed every teenager they could find to learn what’s on the mind of the Youth of New York City. Our conclusion: The teenagers here are hilarious, smart, and adorable, even at 3 AM, after a full night of partying.

I took mad pictures of these two, but then my phone was stolen and the photos disappeared with it! So let me describe them real quick: Julian was cute, thin, African-American, in a long-sleeved button-down, jeans, and some string bracelets. Geraldine was a Peruvian pixie with incredible eyebrows and a perfectly straight, shiny black bob. Both had septum piercings. Both were adorable. —Anaheed

anaheed Where were you before this?

geraldine We were at two bars.

julian Two bars, a McDonald’s, and a rooftop.

brittany You guys have had much more of a night than I can handle.

julian I’m just waiting for my night to begin!

anaheed Where are you going after this?

geraldine What does that mean?

julian I don’t know! But I guess I’ll find out.

anaheed How long have you two known each other?

julian [Laughs] It feels like I’ve known her for years, but it’s only been since January.

anaheed How did you meet?

julian We used to work together at American Apparel.

anaheed Where do you work now?

julian I still work at American Apparel, but she just got fired!

anaheed [Gasps] What did you get fired for?

brittany Which one did you guys work at?

brittany Oh, OK! I go to NYU, so I know that American Apparel.

geraldine Get that discount!

brittany I’m gonna print out this article and show you and be like, “Remember me?”

julian I would definitely give you the discount.

anaheed Brittany knows how to do college right. She takes all classes on like David Bowie, Nirvana, Diddy, punk…

geraldine That’s cool! I didn’t even know they had classes like that!

brittany What other music are you guys listening to? What’s on your iPod?

geraldine and julian [In unison] Everything.

brittany It was just the 20th anniversary of Illmatic! What’s like your walking music?

julian Wait. [Rolls up a sleeve to show us a tattoo with some Bengali writing] It’s in Bengali. It says Nirvana.

brittany Wait! [Rolls up her sleeve to show us a tattoo of the Nirvana logo] 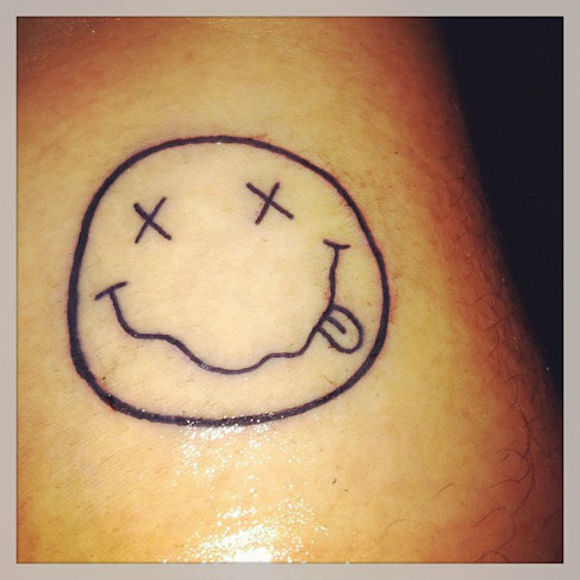 brittany I just took a class on Nirvana.

anaheed Wait, why am I the only person freaking out that you both have Nirvana tattoos?

[Everyone smiles politely at Anaheed, but no one freaks out the way she wants them to over this incredible coincidence.]

brittany What are your favorite movies?

julian I love comedies, and some documentaries I see on Netflix.

julian My favorite one was about…I forget what it’s called. Was it called Knockout? No… It was about this Irish family. They live in like trailer parks and stuff and, like, all they did was fight. They had this rivalry with this other family who’s actually their cousin. But one member of one family killed another, and all they do is meet up and fight. It’s just crazy. It’s really great! I have to find the name of it. It’s so good.

geraldine I love comedy movies and I like horror movies.

geraldine Really? I’m learning new things about you! I don’t like action movies!

geraldine Yeah, well, maybe one or two are good, but I can’t remember them now.

anaheed You guys have been drinking, haven’t you?