Let’s Spend Some Time Together

An argument in favor of one-night stands. 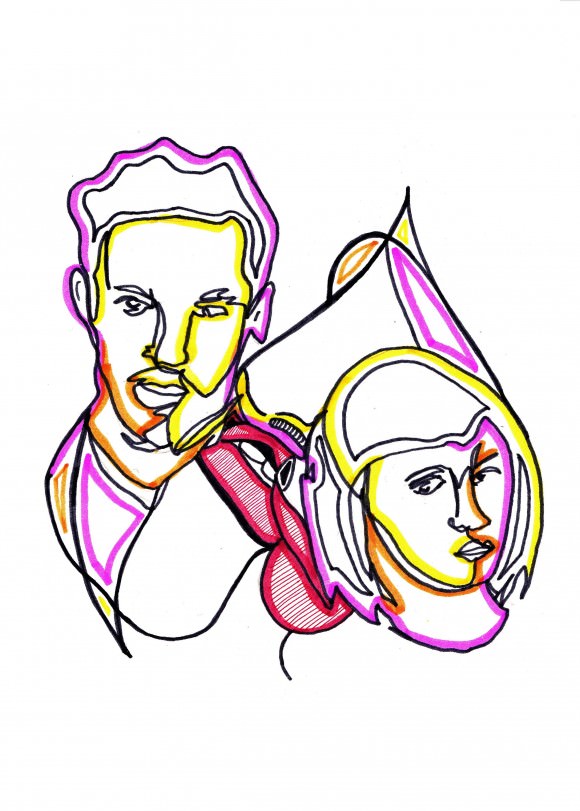 It happened when I was pining after a boy. We had supposedly ended things, but I didn’t want them to end. We were out dancing with mutual friends, and he was ever present on the dance floor. I knew he had no interest in going home with me, much as I should long for him. So I turned my head in the opposite direction, and that’s when I saw him—a different him. He was standing by the bar, wearing a leather jacket, with floppy hair I wanted to run my hands through. Before that moment, I couldn’t have imagined wanting to taste anyone else’s lips besides those belonging to my ex. But here was a chance to lighten the shadow that he had been casting over my emotions for a month or so, ever since we’d had sex. And this is how I came to have my first one-night stand: as a premeditated act of defiance.

Emboldened by my determination to wash that boy right outta my brain, I danced over to the floppy-haired guy and introduced myself. I understood for the first time why the music is always so loud at dance clubs: It forces you to lean in close to be heard, to bump faces and grab on to arms and shoulders. We shouted into each other’s ears about our tastes and interests—I remember being excited that he also loved Bruce Springsteen and Arcade Fire. Then we kissed. A few hours later, this random specimen of the male sex was lying next to me, lightly snoring (You can fill in the part in between.)

The next morning, I was in a remarkably good mood. He went home, and I walked with my head held high to go buy milk. It was a bright, sunny day. I was lucky enough to know I wouldn’t be judged by my friends, who were rooting for me to move on from boy number one, and given me approving looks the night before when they saw me dancing with my head on boy number two’s shoulder. I knew that no one I knew would call me a slut nor praise me as some kind of model of sexual liberation—both extremes being common reactions when it comes to young women who make a habit of sleeping with strangers.

I have never understood what anyone could possibly have to say about anyone else’s sex life. As long as you aren’t hurting anybody (including yourself), and as long as you’re doing what you really want to do, I don’t see what could possibly be degrading or “wrong” about having sex—or not having sex, if that’s what you choose. But for some reason, a woman’s personal choices about what she wants to do (or doesn’t want to do) with her body are subject to heavy scrutiny. The word slut is used to scare us away from doing exactly what we want.

Then, if you refuse to be scared away, you’re seen as “liberated,” like you’re doing it specifically to make a point. But everyone’s idea of liberation is different, and for some people that means not having sex with anyone, or only having it in the context of a committed monogamous relationship. Freedom is about choice, after all.

Since that night at the club, I’ve had sex with strangers when the opportunity arises, which isn’t as often as every week or even every month. Sometimes I’ll want to go out and focus on my friends rather than strangers and just won’t be in the mood. But that’s what I love: I can take or leave sex on just about any given night.

I know one-night stands aren’t for everybody. You hear that you’ll feel “empty” in the morning, or that you’ll becoming emotionally attached to anyone who dares enter your bed. I’m sure these things are true for some people, and obviously, those people should avoid overnights. I’m fortunate in that that all I feel after a night with a stranger is refreshed, and ready to move on with my day/life. For other people, one-night stands (ONSes) can be an opportunity to get in touch with their sexuality again after a period without sex, a quick ego-boost when they need one, or just for a chance to enjoy the pure fun that sex can be. ONSes also give you the opportunity to learn about what you like and don’t like. Every person is different when you get naked with them, and every difference gives you a chance to experience something new. Not all one-nighters are going to be great, but even the so-so ones are experiences to learn from. (This is where the phrase “no regrets!” seems obligatory.) And, finally, if you, like me, don’t currently have a significant other but you do enjoy sex, ONSes are the easiest and most practical way to get what you want.

For me, a one-night stand is a fun alternative to nursing a long, drawn-out crush on a fellow human being. Not that crushes are terrible, but they can be exhausting. Are they easy on anybody? When I have a crush, I am constantly wondering and worrying about what that person is thinking (particularly about me), and fantasizing about our potential future together. This is why I love one-nighters: They are a vacation from painful emotional ties, from obsessing and overanalyzing, from high expectations and dashed hopes.

To call my latest encounter a one-night stand would be exaggerating: I didn’t know his last name, and he was in and out of my dorm room in 30 minutes. I find actually sleeping with strangers boring and cramped and just unnecessary, so I didn’t mind when, after we’d had our fun, he left with the excuse that he had to be up early in the morning. My neighbor’s door was open, so I ended up paying her a visit and telling her what had just gone down. We ended up talking and laughing until the sun came up, musing over how ridiculous sex can be. Basically, I got the best of everything—physical pleasure and emotional bonding—just not all with the same person.

That’s an important point, actually: I live in a dorm. There are always friends and neighbors around and awake, so bringing a new dude to my room isn’t as risky as it would be if I lived in an apartment or house. (And I always bring people to my room rather than go to theirs—I feel safer that way because my friends are close at hand and paying attention.) If you’re thinking of having a quick romp with a stranger, exercise extreme caution! Don’t go with them to an unfamiliar place. Be sure a few friends know what’s up. Crucial information to give them: the other person’s full name, where you’ll be, and what time you’ll contact them in the morning. Keep an eye on your drink—never leave it unattended. DON’T bring anyone home if you’re even tipsy—you’re much more likely to have unsafe sex after drinking. Speaking of safe sex, ALWAYS use a barrier method with an ONS, for obvious reasons! Have a bunch of condoms/dams/whatever you use in your room at ALL TIMES. Keep a few in your bag, too, just in case something goes down at a friend’s place. Always trust your instincts. If something feels off, walk away. You are not obligated to give anyone the gift of your company.

I would never recommend sleeping with someone you are going to see on the regular, unless you are 100 percent sure you would never develop feelings for them. Unless you can deal with everyday awkwardness, stick with people you are unlikely to see again. If you’re looking to hook up with someone, go out with the spirit of exploration and discovery: You could meet ANYONE tonight: a potential sex partner, a great dance partner, a new best friend. All of these are exciting prospects, and I find if you go out into the world with your mind open to every possibility, you’re likely to encounter almost all of them.

One of the best things about a one-night stand is that you don’t have to get breakfast with the other person (unless you want to) or friend them on Facebook the next day, unless you really really want to. In fact, you may very well never see them again, which lets what happened between you exist as this fleeting moment when you were physically close, if not necessarily emotionally so, that lives only in your shared memories. And it’s kind of nice to share such memories with total strangers. It keeps them pure and special in your mind, and, depending on how interesting the person was, it gives you good stories to tell. I think of my ONSes as encounters with humankind to add to my bank of experiences. And for those you’d rather forget, well, at least you won’t have them around reminding you. (And if you do run into them, you have nothing to feel embarrassed about, but you don’t have to say hi either if you don’t feel like it.)

So I look forward to brushes with more human beings, because sex is fun, and it’s nice to know that I don’t have to be in a relationship to have it. Neither do you. And for this, we are lucky. ♦